Support from an adventure center is helping a new generation of rugby players reach for the stars – including a talented young scrum half from Flintshire.

Adventure Parc Snowdonia has signed an agreement to sponsor Rygbi Gogledd Cymru (RGC) which was set up to fast-track the region’s brightest rugby talents.

As part of the arrangement, players are able to enjoy the huge range of facilities at the pioneering complex in Dolgarrog in the Conwy Valley – including riding the waves in the UK’s first inland surfing lagoon

The club attracts players from across North Wales and Mid Wales, from as far afield as Newtown and Llanfair Caereinon.

The aim is for senior RGC players to make it all the way to the Wales international team.

Ex-RGC prop Sam Wainwright, from Bodelwyddan, has blazed the trail by making a spectacular debut for the senior team in the second test against the Springboks in South Africa over the summer.

Coming on as a late substitute, the rookie anchored the scrum well and won a late penalty that led to the winning try by winger Josh Adams.

Sam’s heroics in Bloemfontein have provided extra motivation for the new crop of players coming through the ranks at RGC.

Nearly 40 members of the Under 16 squad took a break from training at their base at Parc Eirias in Colwyn Bay for a fun-packed afternoon at Adventure Parc Snowdonia, tackling the Ninja assault course and having a go at surfing.

Among them was scrum half Gabriel Speakman, 15, who lives in Mold and attends Rydal School in Colwyn Bay, has been with RGC for three years.

He said: “It’s been a strange time with Covid but it’s really good to get stuck in again and we’ve got a lot of games lined up. I’m really looking forward to them.

“My ambition is to become a professional and play for my country, Wales. Sam Wainwright has shown the way. He’s a great inspiration.

“This is my second visit to Adventure Park Snowdonia. I love it here.

“I have surfed for quite a while before coming here and this is a great way to get waves without being by the coast.

“I love being in the water and when you’re on the board, the feeling is great.” 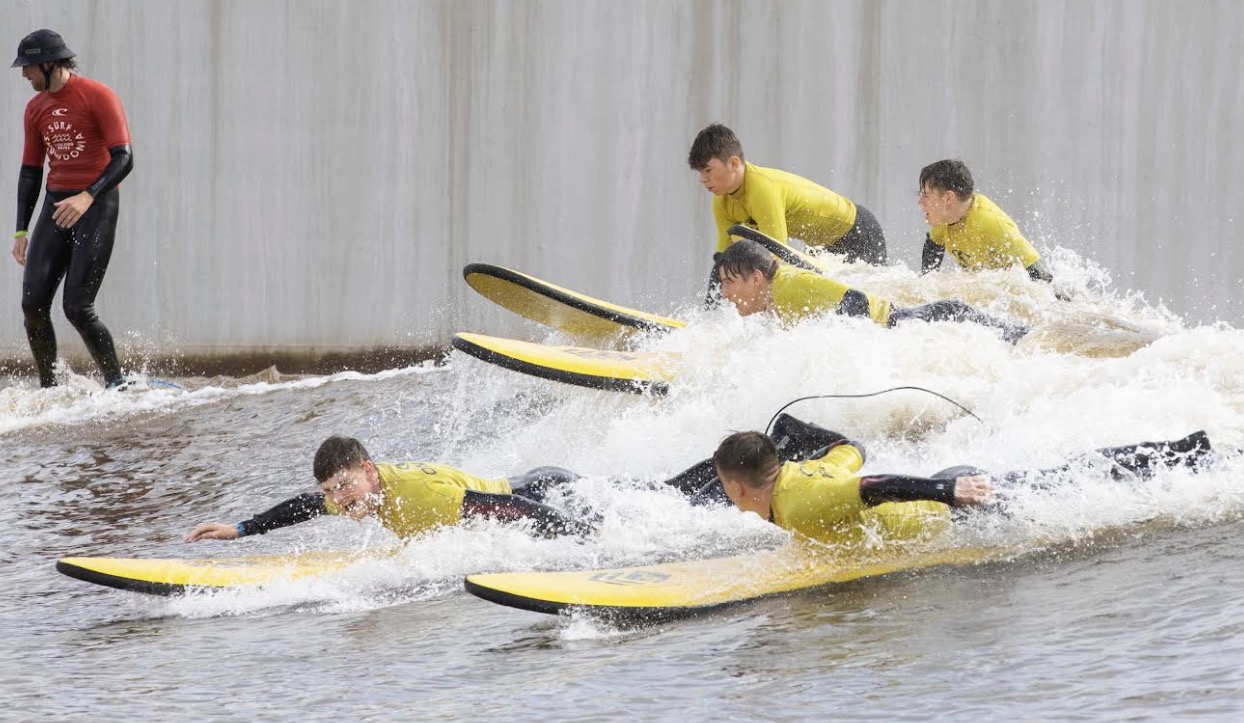 He said: “I’ve been with RGC since last December and my ultimate dream is to play for Wales like Sam Wainwright.

“There’s a great set up at RGC and a great bunch of lads as well.

“I’ve been to Adventure Parc Snowdonia a few times. It’s an amazing place and I really enjoy it.

Loose head prop Wil Hughes, 14, a pupil of Ysgol Brynhyfryd in Ruthin, also had a ball.

He said: “I’ve been playing rugby since I was six and I was very pleased to have the opportunity to join RGC.

Head coach Mike Stubbs hails from Ruthin where he followed in his father’s footsteps and played his hometown rugby club.

After a coaching career that’s taken him to different parts of the UK and Australia, he was delighted to return home to North Wales to take up his role with RGC’s Under 16s.

He said: “Things are pretty much back to normal now after Covid and the boys are training twice a week.

“Our plan is to push them all the way through and play professional rugby and at the very least, play for RGC.

“Our dream is to see more lads like Sam Wainwright coming through the pathway and playing international rugby.

“The partnership with Adventure Parc Snowdonia is really positive and it’s great for us to be able to bring the lads here.

“They’re just starting to gel as a group so this will really bring them together. It’s a great team building exercise.

“The facilities at Adventure Parc Snowdonia are incredible and we’re lucky we can make use of the resources here.

“They actually have a few surfing lagoons out in Australia so that people can get regular waves rather than wrestling with sharks, but they don’t have this amazing scenery. It’s incredible.”

Adventure Parc Snowdonia managing director Andy Ainscough said: “We were delighted to welcome RGC’s Under 16 squad here today for an afternoon of fun and team building.

“Like RGC, we are an extremely community focused organization, with a similar ethos and complementary goals.

“There are some exciting young players in the Under 16 set up and we’re hoping that one or more of them can follow Sam Wainwright’s example and fly the flag for North Wales on the international stage.”

Spotted something? Got a story? Send a Facebook Message | A direct message on Twitter | Email: [email protected]

Get notified about
news from across North Wales