West Ham are set for one of the biggest nights in their history on Thursday as they host Lyon in the first leg of their Europa League quarter-final.

With the French side languishing down in ninth in Ligue 1 and having conceded 12 goals in their last nine league games, the Hammers’ first European quarter-final since 1981 looks a favorable one.

But Lyon have been a different animal in the Europa League this season, with Peter Bosz’s side unbeaten in the competition after knocking out Portuguese league leaders Porto in the last round.

Sky Sports talks to French football expert Jonathan Johnson to get the lowdown on Les Gones, whom he believes can burst West Ham’s Europa League bubble…

How important is the Europa League to Lyon this season?

It’s hugely important, make no bones about it. It’s not gone Lyon’s way so far this season. The appointment of Peter Bosz hasn’t worked out, there’s been well-documented issues within the club at leadership level, so it’s quite an unbalanced ship at this moment in time.

For Lyon to have another season without Champions League football is really unthinkable and it does look unlikely they’ll get it via Ligue 1, so winning something like the Europa League is quite a good alternative.

I think it’s going to be a tough game for them against West Ham, but also Lyon tend to have saved their best form for the Europa League this season.

Why have Lyon struggled domestically?

I think there’s a lot of complacency within the squad. There’s a lot of players who feel that they’re capable of better than where Lyon are at present, but don’t necessarily realise that unless the collective clicks into gear they’re not actually going to get back to those heights.

Some of the key players perhaps felt they could have moved on at various points in the past, so they’re not necessarily as focused on what’s going on week in week out in Ligue 1 and save their best for these big games.

You see them go toe-to-toe with most of the big teams in France. They’re similar to PSG in a way, where if the players don’t feel like turning up and putting in a performance they don’t do that.

But whereas PSG have a lot of individual ability, that means they can canter to a league title, but Lyon don’t, which is why they find themselves closer to mid-table rather than the European positions.

How talented is the Lyon squad?

Lyon have some fantastic players who are capable of being some of the best in Ligue 1 on their day. It’s just a question of whether they feel like putting in a performance, but I think they’ll be highly motivated across these two legs against West Ham.

Karl Toko Ekambi, who is set to be fit for the first leg, has been one of the outstanding performers in the Europa League so far. I’m sure West Ham fans will remember Moussa Dembele from his time in England and also in Scotland; he’s started to come into a bit of form.

There’s Houssem Aourarwho when he feels in the mood to to put in one of his performances he can be fantastic.

Everyone will know Jerome Boateng at the heart of the defense, as well as Jason Denayer.

Lukeba Castle is is a player who I rate highly. He’s coming through at the moment and one of the latest academy gems. He’s become their strongest defender in terms of form at this moment in time so he’s definitely a player to keep an eye on.

I also really rate Romain Faivre, who was brought in from Brest back in January. And obviously there’s Tanguy Ndombele as well, who’s on loan from Tottenham.

So there is plenty of quality in that side and more than enough to pose West Ham a few problems, but it’s a question really of whether it all clicks or not?

Has Ndombele’s Lyon return been a success?

It definitely hasn’t been a disaster. He’s had his moments of him, like the team, but I think he’s come back to a team in transition.

I think really for Ndombele to make any sort of lasting impact with Lyon, he’s probably going to need to stay beyond the end of this season.

Everybody knows that he definitely has the ability to contribute, but I don’t think that Lyon will be in a position to be able to buy him outright this summer, unless Tottenham wanted a player in Lyon’s squad and then perhaps the deal could be done there. But otherwise, I don’t see Lyon being able to afford bringing in Ndombele, and certainly not if they fail to land Champions League football.

How has Arsenal target Aouar performed this season?

Aouar for a while now has blown very hot or very cold. He’s one of the players who I think felt like it was time for him to move on but he didn’t get that move.

Juventus were very strongly interested in him and his form has really gone off the boil since. I definitely think it’s kind of similar to Nabil Fekir in a way, where when they’re mentally not invested in what’s going on around them, they start to become almost more of a passenger within the team and that’s what’s happened to Aouar.

We know that he’s got the ability to turn it on his day, but I think now this Lyon side is less reliant on him than they were in the past. They’ve certainly got more forward-thinking players now that they’ve moved Bruno Guimaraes on to Newcastle and brought in Faivre who has hit the ground running.

Has Boateng’s Lyon move worked out?

No, it hasn’t. I don’t really know what they were expecting bringing in a veteran who doesn’t really have anything left to prove in his career of him.

I think he would have been quite disappointed by some of the stuff that he’s found with a lot of the issues behind the scenes that Lyon have been suffering from.

I think while the idea of ​​bringing in someone of Boateng’s experience was the right one, I don’t think he was necessarily the right fit for the club.

How can West Ham beat Lyon?

I definitely think that there is a potential for West Ham to get a lot of joy targeting that Lyon backline. 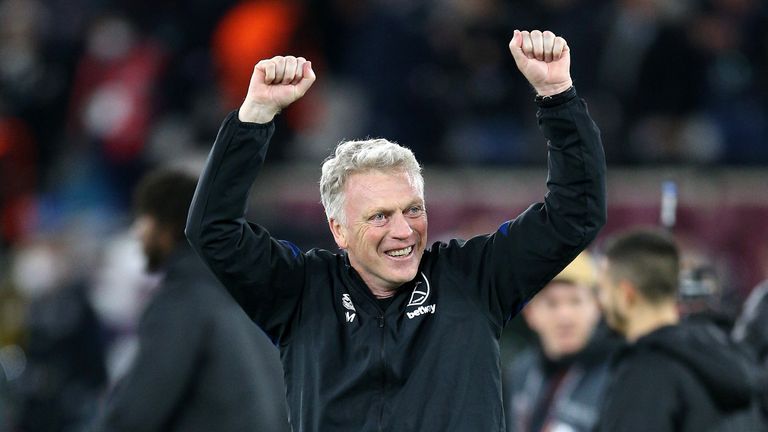 I think that what West Ham will probably have to try and avoid is allowing all of those technical players in Lyon’s midfield too much time on the ball, because if Lyon are able to dominate that and dictate the pace of the game, then they stand a chance of coming away with a positive result.

I definitely think ability down the wings is something that West Ham can look to capitalise on. Lyon don’t have the strongest set of fullbacks, either they’re limited in terms of their profiles, or they’re very young kids just coming through, like Bad taste for example.

So I definitely think that there’s potential for West Ham to have a lot of joy down both flanks, particularly on the left.

Who will reach the semi-finals: West Ham or Lyon?

With my French bias, I’m going to say Lyon shade this one narrowly. I think West Ham’s form has dropped off a little bit recently.

FREE TO WATCH: Highlights from West Ham’s win against Everton in the Premier League

I think for Lyon this is almost like a pair of cup finals and obviously they know that even if they were to get past West Ham, the task will still be massive in terms of trying to reach the Europa League final. This would not only be a big boom for Lyon but for French football as well and I think they’ll be motivated by that.

Lyon are one of the powerhouses of the French domestic game, and I think the importance of having them enjoy some success on the continental stage could really reinvigorate the club.