It was the 17th annual Ducky Derby for Special Olympics Illinois.

This is the biggest fundraiser of the year for Special Olympics Illinois. They raised $400,000 this year.

The owner of the winning duck gets a brand-new Chevy Equinox. Other prizes included a Caribbean vacation, tickets to the Windy City Smokeout, and cash.

Kyle Tuckey, this year’s Ducky Derby Ambassador, has competed in the Special Olympics since he was 8 years old. He’s a mile-high miracle.

“Kyle’s been through a lot. You know, he had some serious brain surgery a number of months ago but he’s so resilient,” said Dave Breen, President and CEO of Special Olympics Illinois.

Kyle Tuckey, this year’s Ducky Derby Ambassador, has competed in the Special Olympics since he was 8 years old. He’s got one big message for Chicago.

Tuckey is remarkable in every way, and a true hero to the thousands of travelers he has helped as a United Airlines service ambassador at O’Hare Airport.

“I love his outspoken, outgoing attitude and he is not shy by any means,” said Steve Suchorabski, Manager at Innovations and Solutions.

Earlier this year, United sent Special Olympic athletes to the USA games with the ultimate fan-fair, and Tuckey was there. He’s earned several gold medals in gymnastics.

“My golds were in vault, they were in high bar and also rings,” said Tuckey. 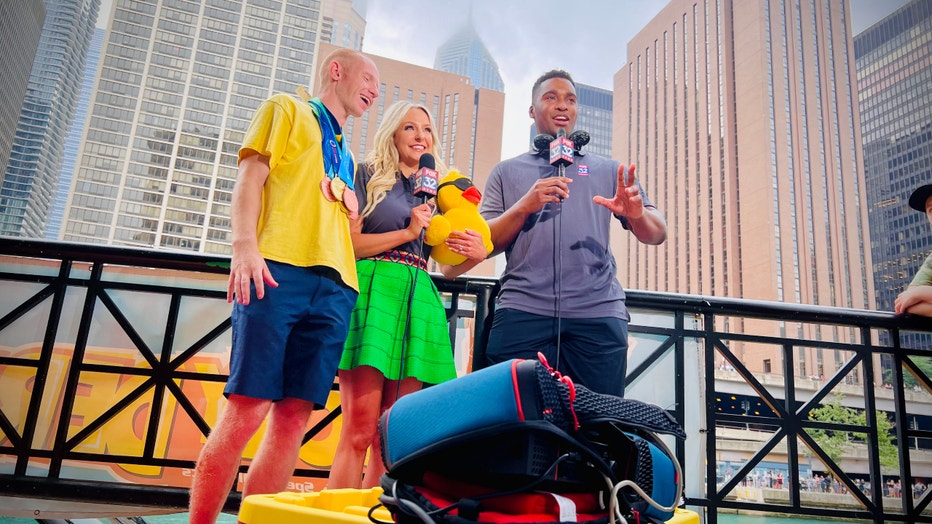 For 20 years, Tuckey has been lifted up, loved and celebrated as a Special Olympic athlete.

“I made all my friends through the Special Olympics and that’s a pretty big number,” Tuckey said.

Now, he’s giving back, making someone else feel like a winner by drawing some lucky ducks at this year’s derby.

He’s got one big message for Chicago.

“Keep doing what you’re doing because it is working. You are making us all shine as one,” Tuckey said.