Shohei Ohtani blasted a pair of home runs as the Los Angeles Angels went deep a season-high seven times in an 8-7 loss to the Oakland Athletics on Thursday.

Scoring all of their runs on solo homers, the Angels earned a dubious club record for the most homers in a defeat, according to MLB.com. 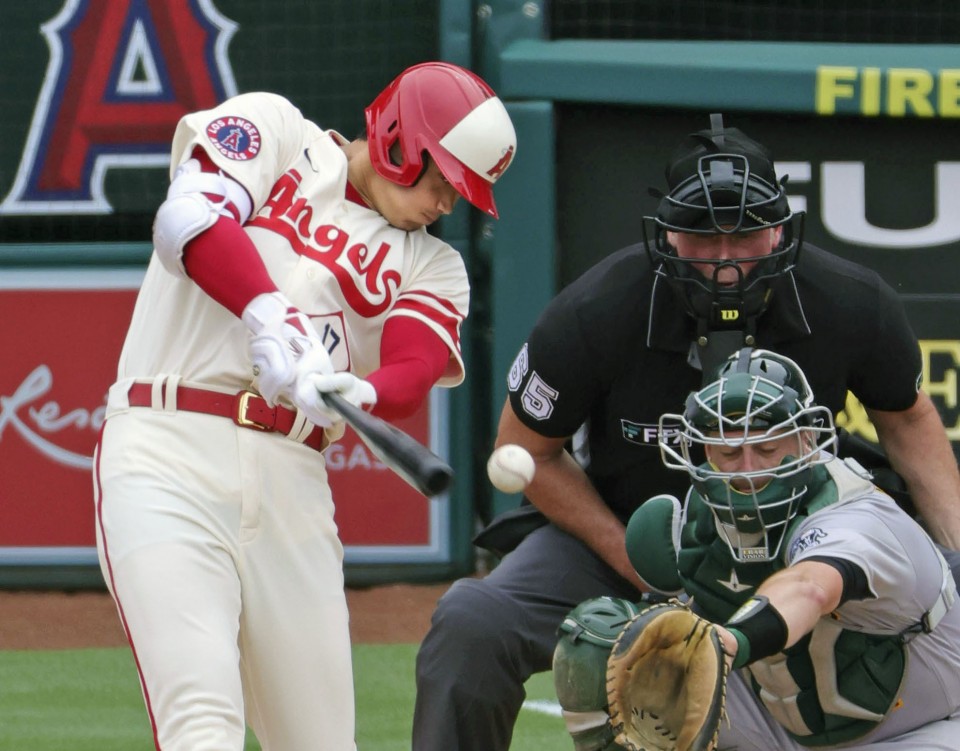 Shohei Ohtani of the Los Angeles Angels hits a single in the fifth inning of a baseball game against the Oakland Athletics on Aug. 4, 2022, at Angel Stadium in Anaheim, California. (Kyodo) ==Kyodo

Ohtani showed no sign of fatigue after throwing 5-2/3 innings in the Halos’ 3-1 loss to Oakland the previous day.

The two-way star opened the scoring with home run No. 23 off right-hander Paul Blackburn (7-6) in the bottom of the first, lifting it 123 meters over left field at Angel Stadium.

He launched No. 24 deep into the stands behind right in the seventh, narrowing his team’s deficit to 8-6.

It was the reigning American League MVP’s fifth game with multiple home runs this year and his first since hitting a pair in a loss to the Kansas City Royals on June 21.

Now with 117 career home runs in MLB, he is tied with Ichiro Suzuki for second most all-time among Japanese players. Only Hideki Matsui, with 175, has more.

The A’s did most of their damage in a six-run third, chasing starter Janson Junk (1-1) before capping their rally on Seth Brown’s two-run homer.

At Busch Stadium in St. Louis, Seiya Suzuki went 1-for-4 with an RBI and a run scored for the Chicago Cubs, who lost 4-3 to the St. Louis Cardinals in the opening game of a doubleheader.