AN Australian rugby league star suffered a HORRIFIC knee injury during a match on Friday as his leg dislocated and broke.

Gold Coast Titans player Aaron Booth planted his foot on the turf before his leg collapsed and dislocated during the clash with Melbourne Storm.

Nasty left knee injury for Aaron Booth, contact caused the knee to collapse significantly. Brings concern for stretching/tearing of medial knee structures (MCL) & possibility of fracture due to contact. Damage to ACL can’t be ruled out considering the amount of medial force. 🤞for him pic.twitter.com/BDqeSwx6jA

It was a shocking twist which National Rugby League physio Brian Seeney says may have done serious damage.

Speaking on social mediahe said: “Brings concern for stretching/tearing of medial knee structures (MCL) and possibility of fracture due to contact.

“Damage to ACL can’t be ruled out considering the amount of medial force. 🤞for him.”

Fox Sports journalist Lara Pitt later revealed that she had spoken to Booth following the horrible injury – with x-rays showing that he had also broken his leg. 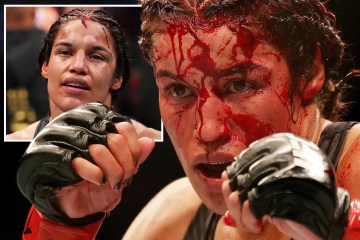 She tweeted: “Just spoke to a devastated Aaron Booth – said he felt the tibia dislocate and pop back in on the field.

After the game, Booth’s manager Justin Holbrook admitted it was a very nasty injury.

During an emotional post-match press conference, he said: “I feel for Boothy.

Most read in Rugby League

“He’s fought really hard to get his shot this year and it’s going to be really nasty for him unfortunately. It’s really bad for him.”

Speaking specifically about the knee, he then added: “He’s done everything you could do to it.

“He’s dislocated it and he’s done lots of other stuff.”

To further compound their misery, Gold Coast Titans went on to lose the match 32-14.

The result leaves the team at the bottom of the NRL with just eight points from 20 matches.