‘We are the kings of Europe’, read the huge banner that ran the length of the south goal at the Santiago Bernabeu. With Karim Benzema leading from the front, Real Madrid certainly played like it to knock Paris Saint-Germain out of the Champions League.

Most would agree that in Kylian Mbappe, the French side have the best player in Europe right now. But Benzema now has 30 goals for the season and has a fair claim to that crown, too.

His brilliant second-half hat-trick turned this game on its head after the young pretender Mbappe had looked set to put the tie beyond Carlo Ancelotti’s side. 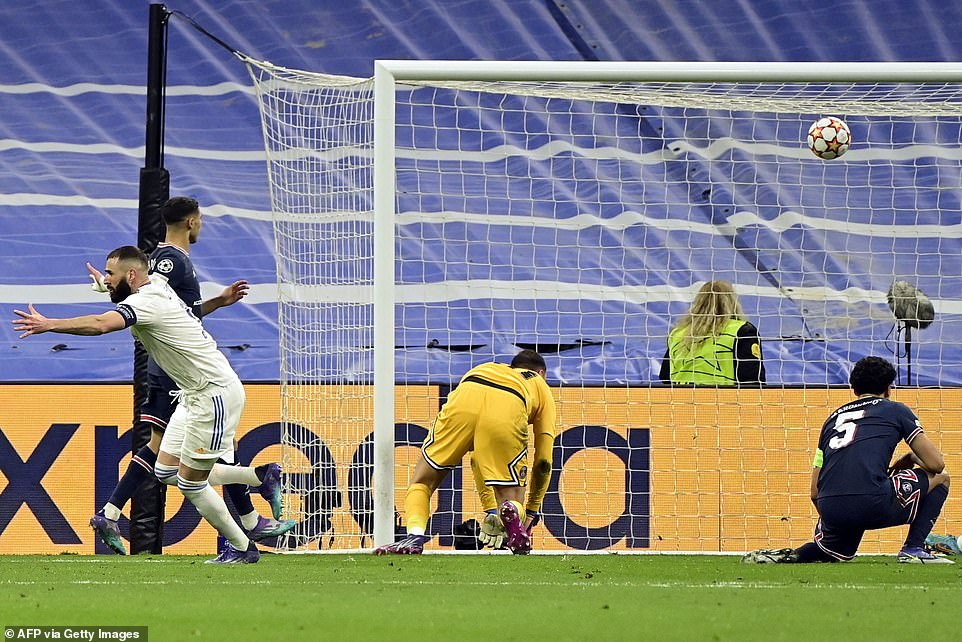 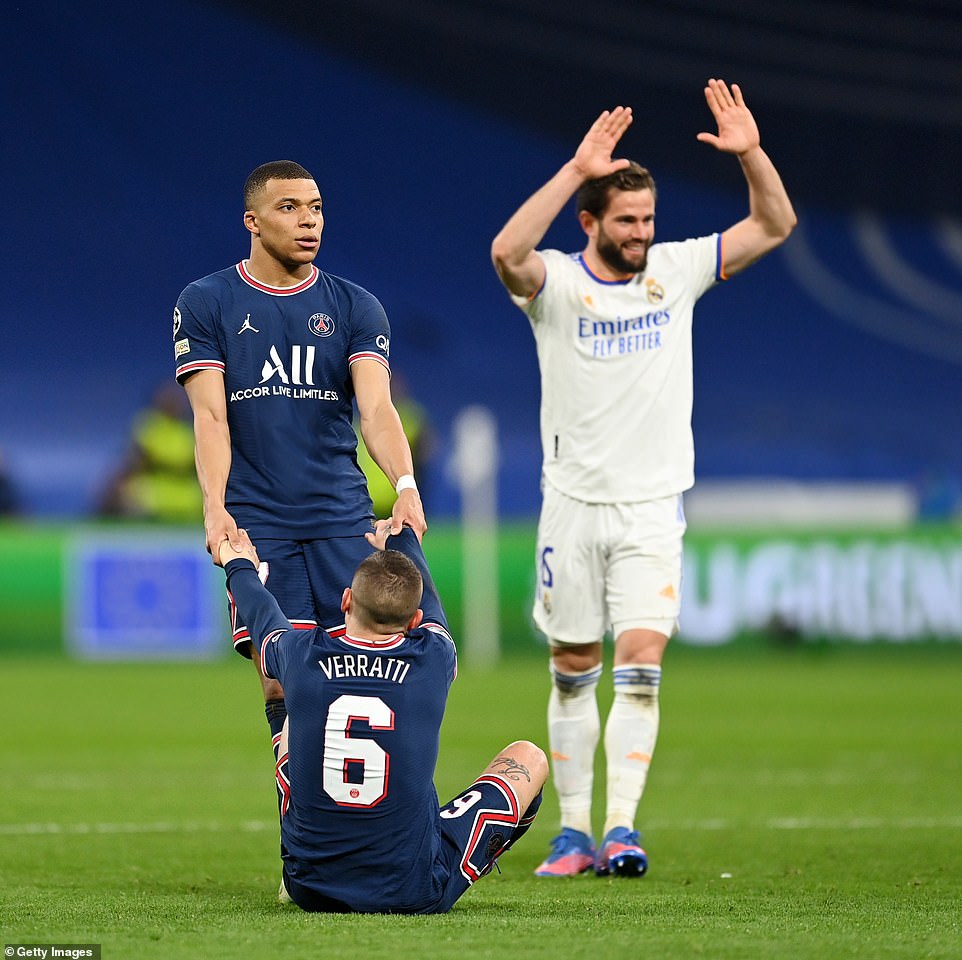 Kylian Mbappe (left), who netted on the night, looks set to be heading for Madrid at the end of the 2021-22 campaign 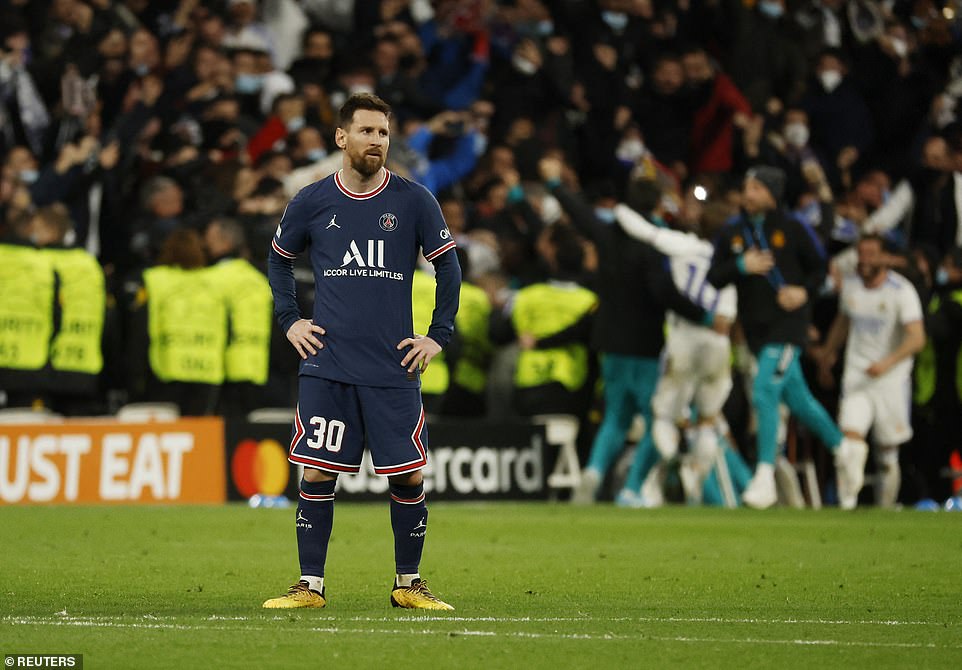 Back in Spain, Lionel Messi came out on the losing side, much to the delight of the boisterous locals who let him know about it

The old fox was left smiling at the end and Mauricio Pochettino is surely facing the sack sooner rather than later.

Lionel Messi’s arrival was supposed to bring the club their first Champions League title, but as it is they won’t even be in the quarter-finals.

Lots gets said about PSG’s front three being an indulgence the other eight players in the side can ill afford. But when it works, it works so breathtakingly well that it is hard to imagine there are too many complaints in the dressing room.

Neymar’s first-time pass over the top of Madrid’s defense towards the end of the first half was glorious enough, but when Mbappe raced onto it you sensed something even better was to come.

The 23-year-old had already been denied on several occasions by the towering figure of Thibaut Courtois but that didn’t stop him shooting early, hard and low to give PSG the lead on the night and double their advantage over the two legs.

Others might have continued the sprint towards goal – but not Mbappe. He could see enough netting between Courtois and his near post to let fly and PSG had the goal that their first-half performance deserved. 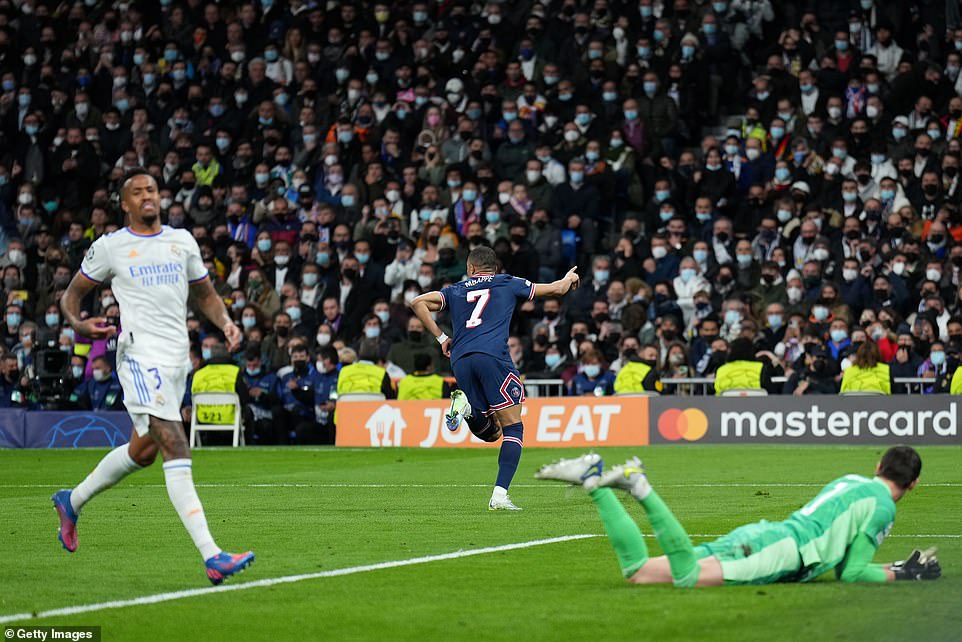 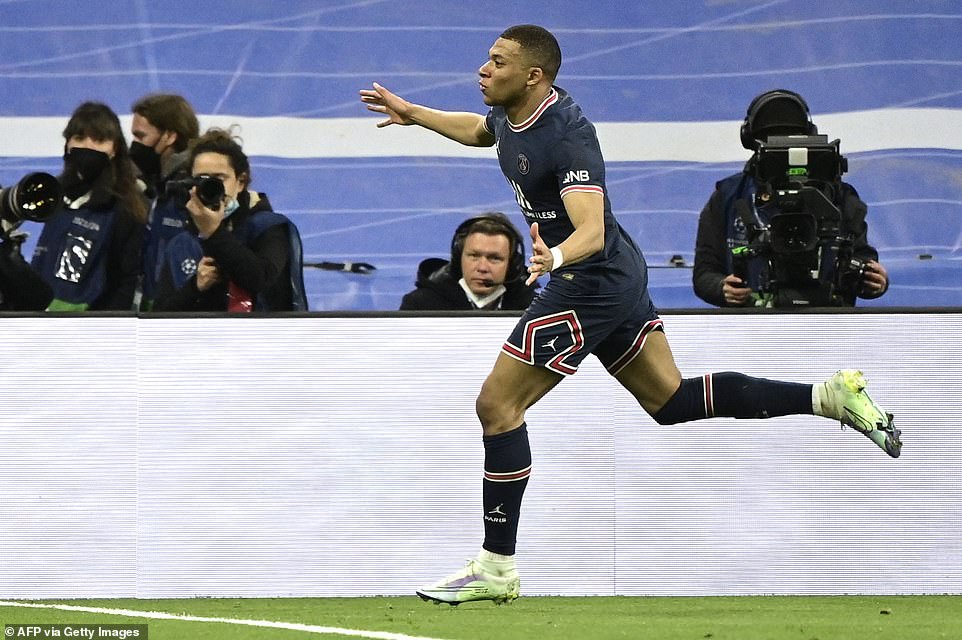 At just 23, Mbappe is making a credible case to be labeled as the best player in world football at this very moment 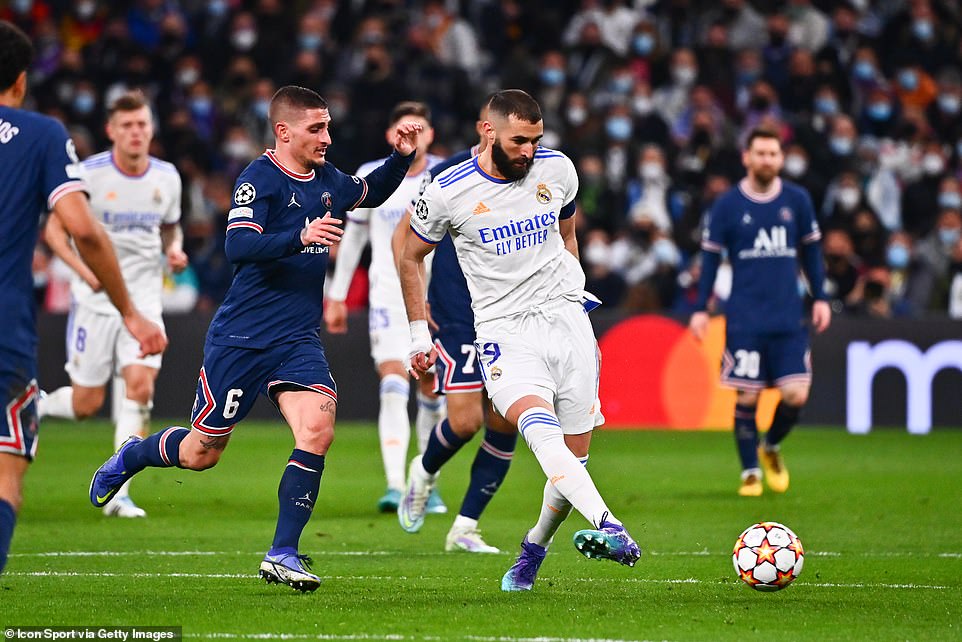 Thousands of Madrid fans had lined the streets around the stadium to welcome the team bus before the game but despite the flares and songs about their various Champions League conquests, there was a reticence every time the chant of ‘yes we can’ went up.

This was a big task, made more difficult by the absence of Casemiro and Ferland Mendy and the mere presence of the man they are convinced they will sign in the summer, Mbappe.

Belief grew at the start of the game and the home supporters were buoyed by a flying start for Vinicius Junior. He crossed for Marco Asensio and the forward saw his shot saved.

Vinicius then dribbled inside and found Benzema but Messi broke things up on the edge of the area and when he released Neymar, PSG were away. Mbappe finished the move off but Courtois saved his shot.

Courtois saved again from PSG’s leading scorer, this time after he had capitalized on a mistake from Eder Militao.

The goal was coming – all the warning signs were there.

Those two chances helped take the sting out of Madrid’s good start. Courtois had to save again, this time from Neymar, and there were nervous whistles as PSG’s spells of possession became increasingly sustained.

Madrid needed him on inspired form but the ball wasn’t reaching him enough and with Messi pinging short passes into Mbappe, PSG were looking comfortable defensively and quietly dangerous in attack.

Messi was next to go close with a shot from a tight angle after a one-two with Neymar that Nacho cleared in the six-yard box.

On 34 minutes, Mbappe had the ball in the back of the net. He celebrated the emphatic finish in front of Real’s supporters, but by the time he had turned back to his team-mates the goal had been ruled out for offside against Nuno Mendes.

He was not to be denied though – and from that superb Neymar pass he buried the next opportunity to put his team 1-0 up at the break. 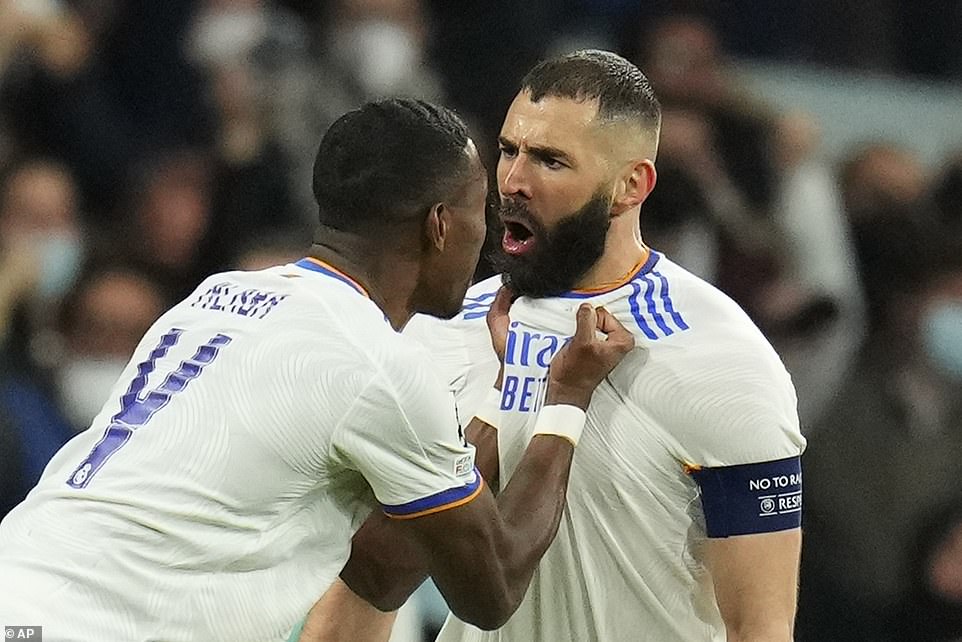 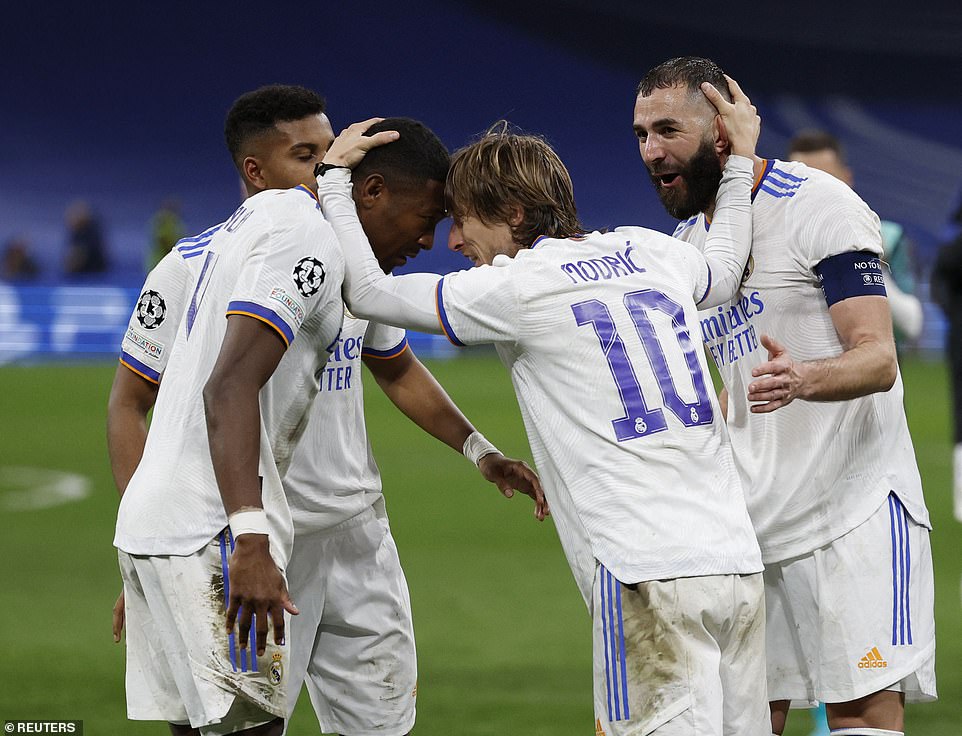 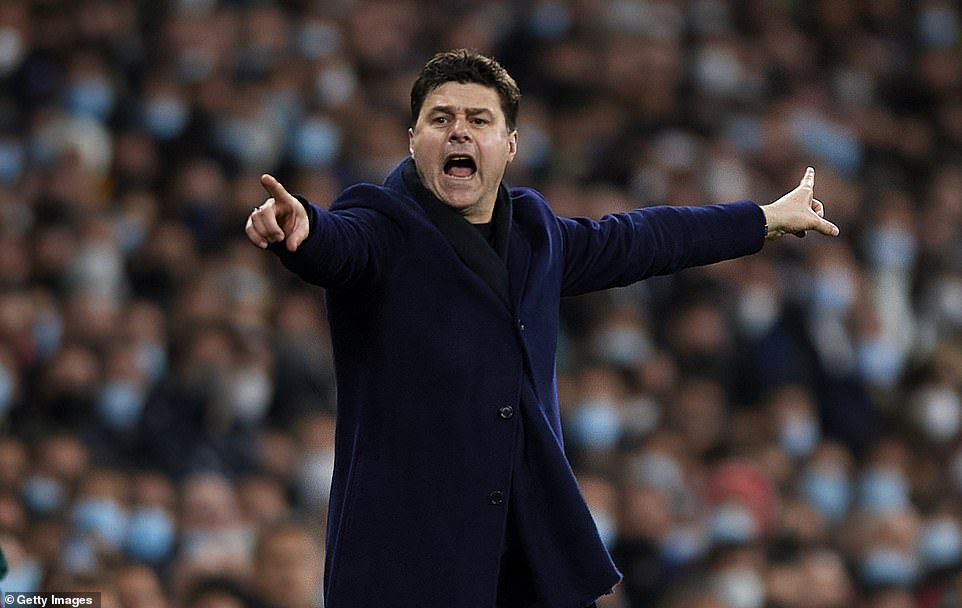