The Rays announced that they have signed a left-hander Jeffrey Springs to a four-year contract extension. The southpaw will be guaranteed $31MM over the course of the deal but there’s also incentives and a $15MM club option for 2027 with a $750K buyout. If Springs hits all the incentives and Cy Young award escalators and the club picks up the option, he’ll earn $65.75MM over five years. The exact details of those incentives and escalators are not known. He will earn a salary of $4MM this year, $5.25MM next year, followed by $10.5MM in each of the following two seasons. Springs was set to reach free agency after 2024, so this could allow the Rays to secure him for three additional seasons, if they end up triggering that option.

Springs, 30, has had a unique baseball journey. A 30th round draft pick of the Rangers, he drew little fanfare from prospect evaluators in his first few professional seasons. Although he got some rotation work for a few years, the Rangers used him exclusively in relief in 2018 to good results. He tossed 56 2/3 innings between Double-A and Triple-A that year. The 4.13 ERA might not seem very impressive, but it was surely inflated by a .438 batting average on balls in play. He kept his walks down to a reasonable 8.1% level while striking out an incredible 41.7% of batters faced. He got to make his MLB debut that year, throwing 32 innings over 18 appearances with a 3.38 ERA.

He took a step back in 2019, missing a few months with left biceps tendinitis and posting a 6.40 ERA. Texas designated him for assignment going into 2020 and then traded him to the Red Sox for Sam Travis. The change of scenery didn’t help Springs get back on track, as he posted a 7.08 ERA in the shortened 2020 campaign. He was designated for assignment again and then flipped to the Rays alongside Chris Mazza for prospects Ronaldo Hernandez and Nick Sogard. 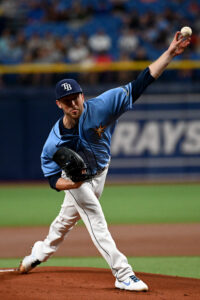 The move to Tampa appears to have been the one Springs needed, as his results have completely turned around since then. He registered a 3.43 ERA over 43 appearances in 2021, striking out 35.2% of batters faced while walking just 7.8% of them. In 2022, he started in the bullpen but the club began stretching him into a starter as the season went along. He responded well to the change, eventually throwing 135 1/3 innings with a 2.46 ERA, 26.2% strikeout rate, 5.6% walk rate and 40.9% ground ball rate.

After a few years of floundering and struggling, it’s not a huge surprise that Springs would jump at the chance to lock in some life-changing money here. He reached arbitration for the first time going into 2022 but only made $947.5K, a slight bump over the $700K league minimum. He was projected by MLBTR contributor Matt Swartz for a jump to $3MM this year, although he and the club did not come to an agreement prior to the filing deadline earlier this month. He submitted a $3.55MM figure while the Rays filed at $2.7MM. Instead, he’ll make $4MM and lock in some eight-figure salaries for the future.

For the Rays, they clearly believe Springs is capable of continuing as an effective starter, although there’s some risk here. Springs had excellent results in 2022 but it’s still just one season, and it wasn’t even a full one. As mentioned, Springs began the year in the bullpen and wasn’t stretched out until the end of May. He also went on the injured list for a couple of weeks in July due to right lower leg tightness. Concerns aside, the Rays are confident enough in the lefty that they’re willing to take a gamble on him.

For a low-spending team like the Rays, extensions are an important part of having talent on the roster. Since they don’t usually shop at the top of the free agent market, they need to keep guys around by locking them up before they get closer to the open market and increase their earning power. In recent years, they’ve given extensions to players like Kevin Kiermaier, Blake Snell, Brandon Lowe, Wander Franco, Manuel Margot and Tyler Glasnowwith Springs now joining them on that list.

This won’t have a huge impact on the club’s 2023 payroll but will add some decent commitments to 2025 and 2026. The club now has three players locked into the former season with Franco and Zach Eflin on the books there, along with a club option for Lowe. In exchange for putting that money on the table, the Rays now have arguably the most rotation stability they’ve had in years. Recent seasons have seen them rely on bullpen games and openers to get through a season but they now have Springs, Glasnow, Eflin, Drew Rasmussen and Shane McClanahanwith depth options like Yonny Chirinos, Luis Patino and Josh Fleming. Most of that group are still in their pre-arbitration years, giving the club years of affordable control. None of them are slated for free agency after this year and Glasnow is now the only one set to hit the open market after 2024. The club also has one of the top pitching prospects in the sport. Taj Bradleywho finished last year at Triple-A and could make his debut this year.