The final international break of the 2021-22 season is over, leaving us to focus on the business end of a gripping domestic campaign – and what a weekend of Premier League football we have in store.

It has the potential to be a hugely significant round of fixtures at both ends of England’s top flight.

There could be a change at the top of the table, with just a point separating leaders Manchester City and second-placed Liverpool.

The race for the top four continues, with Tottenham and Manchester United looking to put pressure on Arsenal.

And many of the teams at the bottom face tough matches as they desperately scramble for precious points to try to preserve their place in the division.

A crucial change at the top? 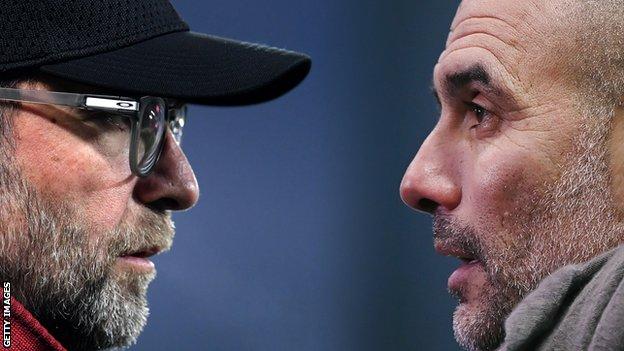 This weekend could see a crucial changing of the guard at the top of the Premier League.

If, as expected, Liverpool beat Watford at home in Saturday’s lunchtime game, Manchester City will be knocked off top spot for the first time since early December.

Granted, that may only be for a couple of hours, with Pep Guardiola’s side facing Burnley at Turf Moor at 15:00 BST, but it still represents a significant psychological moment.

Jurgen Klopp’s team have been the form side in the division, winning their past nine league games on the bounce to whittle away a gap between themselves and City that at one stage was 14 points.

“The good thing is my team never care about their league position,” said Klopp. “They listen to me. I am honest in meetings and don’t make a team sound stronger or weaker than they are.

“Whatever they think about us we have to have to surprise them [Watford] with intensity and positivity. It is for sure not an easy weekend for us or for City. Burnley is the last place you want to go.

“Burnley has a big chance to stay in the league and they cannot make the choice where their points come from.”

City’s loss to Tottenham in February and draw at Crystal Palace in their last top-flight outing has opened the door for the Reds ahead of the potentially defining tussle between the top two at the Etihad on 10 April.

“At the end of the weekend we will know the position that we are but whether we are points in front or backwards we have to do our job,” said City boss Pep Guardiola.

“I think there are nine games to play, so game by game and we see what happens. We know what we have to do is win games. It’s a lot but we’re going to try.”

As past title races between these two have shown (most notably that settled by a single point in 2018-19), an advantage, no matter how slender, can be crucial going down the closing straight. 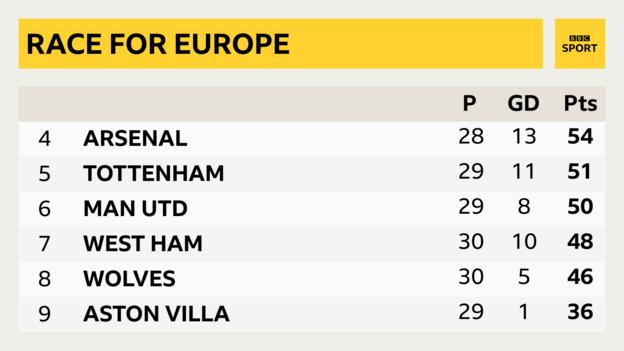 The simple reality is that a ‘big six’ into the top four just won’t go.

As it stands, Tottenham and Manchester United are the two members of England’s top sextet set to miss out on that all-important Champions League football.

However, with fourth-placed Arsenal not playing until Monday, when they visit Crystal Palace, United and Spurs have the chance to apply some pressure.

Antonio Conte’s side can even replace their north-London rivals in the top four, for a day at least, if they beat Newcastle by two or more goals on Sunday.

Before then, though, Ralf Rangnick’s Red Devils host Leicester in Saturday’s evening game, with victory pretty much essential if they are to get themselves back into the Champions League following their disappointing last-16 exit at the hands of Atletico Madrid this month.

Should both United and Spurs slip up, West Ham may well be there to capitalize when they host Everton on Sunday.

Desperate times for the bottom three 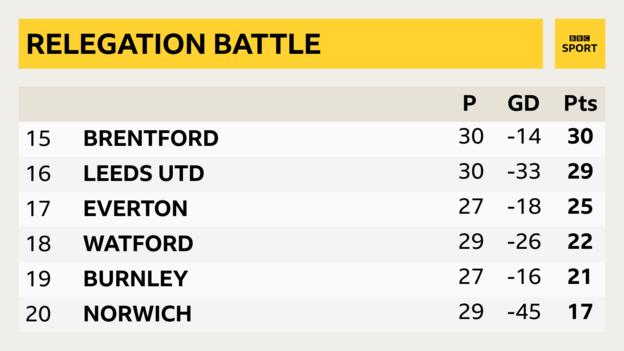 This weekend’s fixtures are not favorable for the current bottom three.

Watford are away at Liverpool, the opponents the Hornets have lost the most top-flight games against.

They have lost 14 of their 16 away matches against the Reds in all competitions and were beaten 5-0 in the reverse fixture this season, back in October.

Burnley host Manchester City, against whom they have lost seven consecutive Premier League matches, by an aggregate score of 24-1. The Clarets have won only one of the past 28 meetings between the two.

Brighton are on a six-game losing streak at the moment, but then so are bottom club Norwich, who travel to the Amex on Saturday. They go there having failed to score in four of their past five league matches against the Seagulls.

Before the international break, Frank Lampard questioned whether his players have the right mentality to play for Everton after they were heavily beaten by Crystal Palace in the FA Cup quarter-finals.

We will find out at West Ham on Sunday if his message – which some have criticized for its tone and timing – has cut through.

Come Sunday, the Toffees will know if a win will only preserve their current advantage over the bottom three or extend it to what could be a crucial six points, especially with them also having games in hand on many rivals.

It is one of those wonderful quirks of fate that the game sees Lampard return to his first club, now managed by one of his predecessors in the Everton job, David Moyes.

Another club looking to steal a potentially pivotal march on their rivals this weekend is Leeds, who have won their past two games courtesy of injury-time winners and host out-of-form Southampton.

A third Whites win on the bounce for the first time this season, coupled with favorable results elsewhere, would really strengthen the place of Jesse Marsch’s side in the division.

They could go as high as 14th if Brentford and Newcastle fail to win at Chelsea or Tottenham respectively.

However, Wanderers have lost four of their past six league games, the latest of which – the 3-2 home defeat by Leeds – was hugely damaging to their bid to finish in the European qualification spots this season.

It also cost them key striker Raul Jimenez for two games, starting with the visit of Midlands rivals Aston Villa on Saturday.

Steven Gerrard’s side are 10 points behind Wolves and unlikely to force their way into the European reckoning, but will love nothing more than throwing another spanner in the works of Bruno Lage’s side.