The Hollywood property got a much-needed boost when Indiana became the 13th state to legalize sports betting three years ago. The 25-year-old casino raked in more than $ 400 million a year in its heyday, but hasn’t exceeded $ 200 million since 2014, when Ohio’s 11 casinos and racinos fully opened.

Hollywood rebounded by establishing itself as the top-performing retail sports book in Indiana, generating $ 15.5 million in revenue last year.

Of course, its gains are a drop in the bucket compared to the sports betting apps that dominate the industry. DraftKings and FanDuel own two thirds of the online market in the Hoosier state, with a combined $ 137 million in gross receipts, which is the money gaming operators keep after all bets are paid.

Indiana’s total handle, or how much gamblers bet, was $ 3 billion, with 86% of that money going to online sports books.

Into this mix now comes Ohio, which is developing rules to launch several new sports-betting options by January 1, 2023. That’ll bring up to five retail locations to Hamilton County and up to 25 statewide license holders who can offer mobile apps for betting.

Downtown’s Hard Rock Casino and Belterra Park are expected to seek licenses. So are the Cincinnati Reds and FC Cincinnati. Beyond that, the Ohio Lottery will make sports-gaming kiosks available in about 2,500 bars and restaurants statewide, likely including dozens within a 40-minute drive of the Hollywood Casino.

“I would expect Ohio to probably be double the size of Indiana,” said John Atkinson, development director for 888 Holdings, a UK-based online gambling firm that announced a mobile betting platform with Sports Illustrated last year. “But that won’t be right off the bat. That might take two or three years to develop. “

Atkinson said most states have continued to grow their sports-betting revenue after rival states brought new options to the market. Ohio’s launch will make Kentucky the only border state that doesn’t allow sports books, but a bill to legalize sports betting cleared a KY House committee this week.

The bill’s sponsor, Rep. Adam Koenig of Erlanger, said Kentucky could generate more than $ 22 million in new tax revenue from sports betting, based on a three-year-old estimate that gamblers would place about $ 2 billion a year in bets.

“All I know is, it’s more than we’re getting now,” Koenig said. “The bookies and the offshore accounts will keep taking your money either way. So, let’s do it the right way. Let’s provide a safe, legal method and we’ll generate money for the state’s pension system. “

If the bill passes before the General Assembly’s current session ends April 14, Koenig said Kentucky’s sports-betting industry could be up and running before Ohio launches.

Keeping up with a changing landscape

With new threats emerging, Hollywood Casino is rising to the challenge.

“How do you build loyalty? You offer them the products that they want, right? And that’s why we’re expanding the space. That’s why we’re trying to develop an environment that’s all-inclusive, ”Calle said.

The new sports book is nearly twice as big as its 4,400-square-foot replacement with over 50 new slot machines and electronic table games, 20 self-service betting kiosks, five new blackjack tables and a new betting window for VIP customers. An expanded dining area added 50 new seats and a refreshed menu. The expansion brings 14 new jobs to the property, with about 700 total employees.

Calle said sports book gamblers “skew younger” than the slots players that generate most of a casino’s revenue. He estimates about 1,000 gamblers in Penn National’s loyalty-card database are regular gamblers at Barstool Sports. He’s hoping to grow that number as Ohio rivals ramp up. 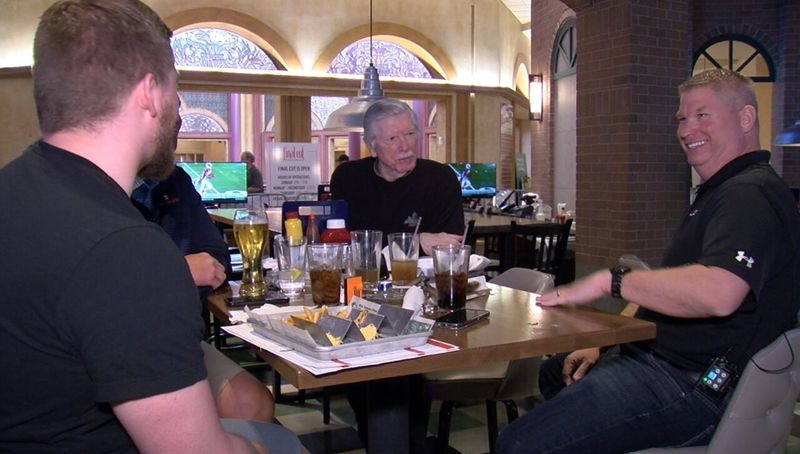 “I think it’s gorgeous,” said Nathan Guard of Liberty Twp., Who visits the Sports Book once a week to have lunch with family members from Lawrenceburg and Northern Kentucky.

“Now with the expansion, it might be twice a week,” Guard said. “More TVs, more service, more options. It’s more of a fun experience, visiting or having a cigar, some food, that’s more enticing to me to gamble. “