That was how Barcelona captain Alexia Putellas described playing in front of a record-breaking crowd of 91,553 fans at the Nou Camp.

It was the team’s first appearance in front of supporters at the iconic stadium and the occasion did not disappoint.

The players produced a sensational display to thrash rivals Real Madrid 5-2 and reach the Champions League semi-finals, but all eyes were on the crowd, and whether it could surpass 60,739 and set a new record attendance for a women’s club game.

It went much further, beating a 23-year record of 90,195 from the 1999 World Cup in the United States, to become the largest crowd to watch a women’s football match.

Ballon d’Or winner Putellas, who grew up watching the men’s team at the Nou Camp, said the turnout had left her “speechless”.

“This has been utterly magical. When the match finished the fans simply didn’t want to go home, there was such a connection between them and us while we celebrated,” she said.

“I saw a lot of girls, children with that spark in their eyes. It’s amazing to be part of history.”

Putellas was among the goals as the defending champions came from 2-1 down to win 5-2 on the night and secure an emphatic 8-3 aggregate victory.

Fellow goalscorer Aitana Bonmati said: “We’ve recently been through some wonderful experiences, especially winning the Champions League. But maybe this was more special.

The night started with Barcelona’s team bus having to squeeze through thousands of fans singing and waving flags outside the stadium long before kick-off.

Inside the ground, a giant mosaic was formed before the start of the match, spelling out the words “more than empowerment”.

The club had said that filling the biggest stadium in Europe would “send out a clear message to aspiring young girls all around the world – you can do it too!”

Nearly all the 99,354 tickets for the El Clasico had been snapped up after a huge engagement campaign by the club, but with some tickets given away for free, there were question marks over how many fans would turn up.

The match started with the stadium only half full, but fans slowly arrived and by the end it was almost at capacity, with those in attendance creating a carnival atmosphere.

Barcelona coach Jonatan Giraldez said: “I told my players before the match that it wasn’t enough to simply qualify tonight. We had to put on a show for our fans – and we did.

“What a great day this has been! We’ll remember it all our lives. The match was magical. It’s complicated, though, to explain all the emotions you feel on a night like this.”

Despite seeing his side on the wrong end of a thrashing, Real Madrid coach Alberto Toril agreed, describing it as “a great spectacle, a fiesta for women’s football”.

He added: “Two super teams who wanted to compete, to attack and a huge crowd. Women’s football is unstoppable, it’s going to grow and grow.” 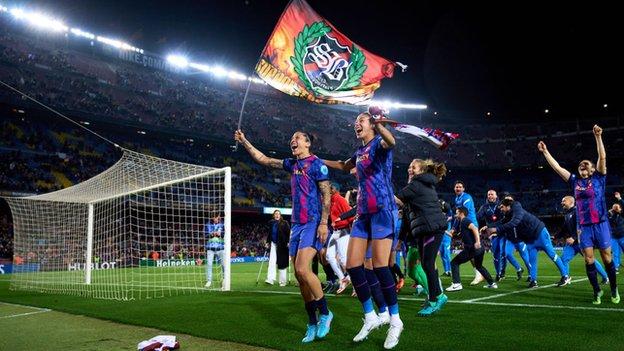 And it wasn’t just those involved in the match who enjoyed the occasion, as footballers around the world relished seeing women’s football on the biggest stage.

Former England and Arsenal defender Alex Scott told DAZN how when she had faced Barcelona with the Gunners they had played in a different stadium in front of “a couple of hundred people”.

“To have this game played here shows how far the game has come,” she added.