Rafael Nadal and Nick Kyrgios will meet in a blockbuster showdown on Friday in the quarter-finals of the BNP Paribas Open, their first clash in more than two years.

Nadal currently leads their ATP Head2Head 5-3, but will Kyrgios spring the upset to narrow the deficit in their rivalry? ATPTour.com looks back at the pair’s previous meetings.

2020 Australian Open R16, hard, Nadal d. Kyrgios 6-3, 3-6, 7-6 (6), 7-6 (4)
It is clear that Kyrgios brings his best to challenge the likes of Nadal on tennis’ biggest stages. So when the pair walked onto Rod Laver Arena to compete in front of the Aussie’s home crowd, there was little doubt Kyrgios would bring the fight to the legendary Spaniard.

Nadal took control early, but one slip in the second set allowed Kyrgios to dig into the match. And dig he did. The Aussie found a great serving rhythm to push the lefty to the brink, but Nadal was a bit too consistent in the tie-breaks to triumph.

“I’m shattered to have lost tonight,” Kyrgios said. “These are the matches that I want to win the most.”

Rafa was unable to capitalize on his big win, losing a grueling quarter-final, which lasted more than four hours, against Dominic Thiem in the next round.

Rafael Nadal is the top seed at the Australian Open. “/>
Photo Credit: Clive Brunskill / Getty Images
2019 Wimbledon R64, grass, Nadal d. Kyrgios 6-3, 3-6, 7-6 (5), 7-6 (3)
Five years on from the pair’s first clash at Wimbledon, Nadal and Kyrgios arrived at Wimbledon at different levels of form. The Spaniard, No. 2 in the ATP Rankings, was fresh off his record-extending 12th Roland Garros title, while the Aussie had won consecutive matches just twice all year.

But Kyrgios had defeated Nadal en route to the Acapulco title earlier in the season, and the World No. 43 did not fear his opponent. He even brought out the underarm serve and threw everything but the SW19 grass at the Spaniard. But Nadal was too solid under pressure, clawing through tie-breaks in the third and fourth sets before eventually reaching the semi-finals, in which he lost against Roger Federer.

“With his talent and with his serve, he can win a Grand Slam, of course,” Nadal said of Kyrgios. “He has the talent to do it.” 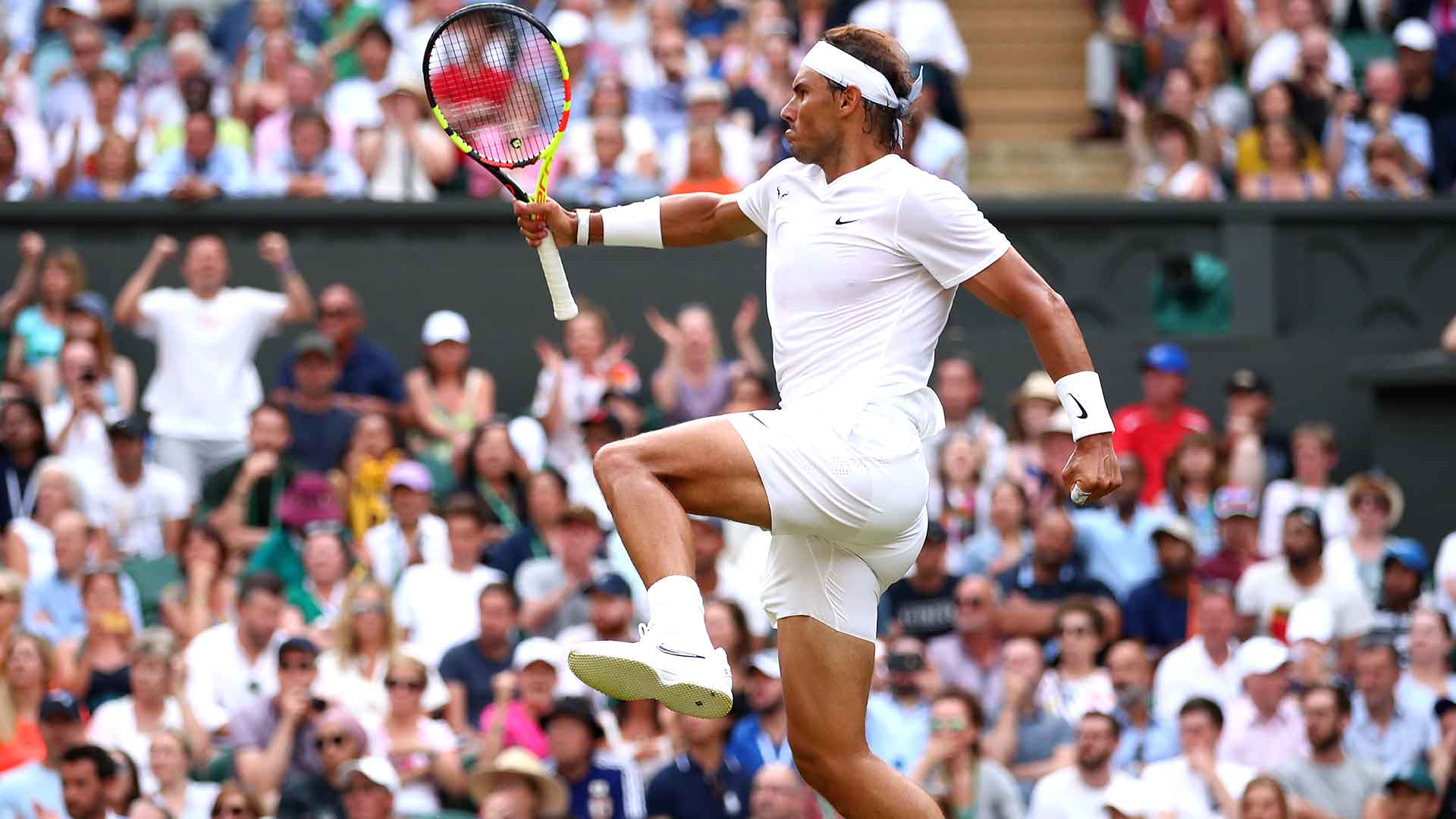 Rafael Nadal beats Nick Kyrgios at Wimbledon “/>
Photo Credit: Clive Brunskill / Getty Images
2019 Acapulco R16, hard, Kyrgios d. Nadal 3-6, 7-6 (2), 7-6 (6)
Put Kyrgios in a lively atmosphere with fans craving entertainment and a legend across the net, and you will probably be in for a show. It is safe to say the crowd got what it wished for at the 2019 Abierto Mexicano Telcel presentado por HSBC.

Kyrgios battled hard at the ATP 500 in Mexico, going for his shots against the top seed. Even still, he was in a losing position. Nadal led the final-set tie-break 6/3, but was unable to capitalize on three consecutive match points, with a Kyrgios backhand drop volley at 4/6 hitting the top of the net, but bouncing over. Nick completed the comeback when the Spaniard missed a backhand long on match point.

“That’s what we play for. To come to Acapulco, Center Court, a packed crowd. They were never silent, ”Kyrgios said. “They were cheering Rafa’s name, cheering my name. It’s a match I will never forget. “

It was a week Kyrgios will never forget, as he battled past Stan Wawrinka, John Isner and Alexander Zverev in his next three matches to lift the trophy and complete the most impressive week of his career.

2017 Beijing F, hard, Nadal d. Kyrgios 6-2, 6-1
Nadal nearly lost his opening match at the China Open, where he saved two match points against Lucas Pouille. From there, the recent US Open champion found fire. His performance of him in the final against Kyrgios was most impressive of all.

The lefty saved all four break points he faced against the Aussie and won an astonishing 52 per cent of his return points against one of the ATP Tour’s best servers to triumph after 92 minutes.

“I have lot of respect for Nick. He’s one of the players with more talent on the Tour, ”Nadal said. “Of course, when he’s playing well, when he really wants to play, he without a doubt he is one of the toughest opponent to play against.”

2017 Cincinnati QF, hard, Kyrgios d. Nadal 6-2, 7-5
The day Kyrgios and Nadal met at the 2017 Western & Southern Open was an interesting one, and not just because they played each other. The pair had to compete twice that day to catch up on the order of play due to rain.

Kyrgios snuck by Ivo Karlovic in three tight sets and Nadal eliminated Albert Ramos-Vinolas just to set their blockbuster later in the day.

“As soon as I finished, I went back to the hotel. I had a nap. Showered up. Went to the barber shop. I chilled, ”Kyrgios said. “I knew I had to sort of just chill out for tonight’s match.”

The break apparently worked, as the Aussie came out flying against Nadal. At 5-1, he even took a backhand return from near the service line, much like Federer’s “Sneak Attack By Roger” tactic. Kyrgios let slip one opportunity to serve out the match, but managed to close out his rival in straight sets. The next day he made his first ATP Masters 1000 final in Cincinnati, where he eventually fell against Grigor Dimitrov.

2017 Madrid R16, clay, Nadal d. Kyrgios 6-3, 6-1
Entering the third round at the Mutua Madrid Open in 2017, Nadal had lost just two sets in his clay-court season. Not even a motivated Kyrgios was able to trouble the Spaniard.

One of the biggest servers in tennis, the Aussie managed to win just 51 per cent of his first-serve points and 45 per cent of his service points overall against Nadal, who cruised to victory in only 72 minutes.

“I think it’s great news,” Nadal said. “I think it’s not normal to win against an opponent like this because Nick is a really good opponent.”

Nadal followed up his triumph against Kyrgios by defeating three consecutive Top 10 opponents – David Goffin, Djokovic and Dominic Thiem – without dropping a set. The Spaniard later captured his 10th Roland Garros trophy, earning the crown in Paris without losing a set.

Kyrgios was no longer new on the scene, though. The Australian was up to World No. 20 and fresh off a victory against a Top 10 star in Milos Raonic on the Roman clay. Nadal had won clay-court titles in Monte-Carlo and Barcelona earlier in the season, but he could not gain the upper hand early on.

Nadal was unrelenting, though. He converted four of his 15 break points to battle on after two hours and 40 minutes.

“When you lose a set, I think everybody is worried. If somebody comes here and says, ‘I was not worried after losing the first set’, [they] probably [are] lying, ”Nadal said. “When you lose a set, you can lose another one. If you lose the second or the third, you’re out. And especially playing against a player like Nick, that he has a huge serve, very aggressive player, great shots… it’s difficult to play under pressure after losing the first. “

Hardcore tennis fans knew the Aussie was on the rise entering Wimbledon. But to the casual fan, Kyrgios was a 19-year-old ranked No. 144 whose run would surely come to an end in the fourth round against Nadal, a two-time Wimbledon champion.

But the teen, who just two weeks earlier had been playing an ATP Challenger Tour event, looked at home on Center Court. He put his big serve and bold game to good use on the slick SW19 grass to announce himself as one of the ATP Tour’s brightest young talents.

“That’s the biggest win of my career obviously, and that’s something I’m never going to forget,” Kyrgios said. “I’m going to draw so much confidence out of that no matter where I play now. To have that under my belt, it’s massive. “ 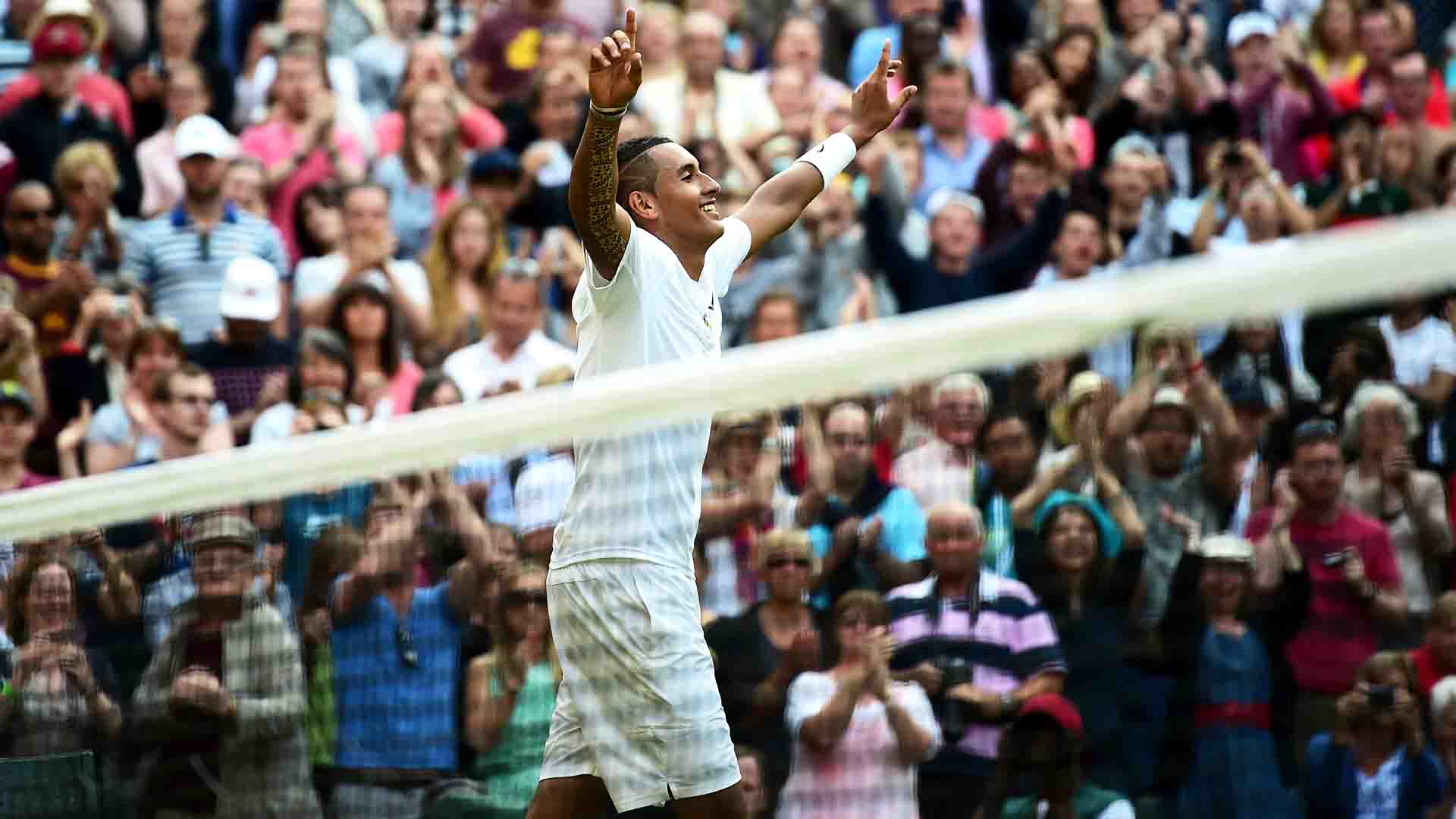