Stephen Curry is out at least 2 weeks with a left foot injury.

After Golden State Warriors guard Stephen Curry tumbled to the floor, Boston Celtics guard Marcus Smart inadvertently dove toward his knees. Will the Warriors’ NBA title chances also dive because of that sequence?

The Warriors said they will reevaluate Curry in two weeks after an MRI revealed that he sprained a ligament in his left foot ligament following Smart’s collision in last Wednesday’s loss to Boston. That ensures that Curry will have missed seven contests, which includes Sunday’s loss to San Antonio as well as games against Orlando (Tuesday), Miami (Wednesday), Atlanta (Friday), Washington (Sunday), Memphis (March 28) and Phoenix ( March 30).

But what about after that? Will Curry play in any regular-season games? How about the playoffs?

There are lots of unanswered questions about him and it’s no wonder, then, that a few Curry-related questions have appeared in this week’s mailbag.

For future mailbags, send your question to me through email or Twitter.

How worried should the Warriors feel about Steph’s absence?

The Warriors should have two reactions to Curry’s injury.

The half-glass full reaction? The news could have been a lot worse. At least Curry didn’t suffer a season-ending injury. At least the Warriors hold a healthy position for the No. 3 in the Western Conference reaction. The Warriors have three other All-Star caliber players (Draymond Green, Klay Thompson, Andrew Wiggins) and a handful of young players (Jordan Poole, Jonathan Kuminga) to hold things down. The focus for Golden State can shift to bolstering their defense with Green’s guidance. Lastly, Warriors coach Steve Kerr told reporters that Curry could even return for some regular-season games.

The half-glass empty reaction? The Warriors have only had 1 1/2 games to feature Curry, Green and Thompson because of overlapping injuries. Though the Warriors ‘stars have built enough chemistry through three NBA championship runs, the majority of the Warriors’ players have never played with Curry, Thompson and Green together. That may put pressure on Green and Thompson to assume a heavier workload just as they are returning recently from their own injuries. That could put too much responsibility for Poole, Wiggins and others to assume. All of which may result in more losses, too.

Stephen Curry is remaining optimistic as he heals up from his foot injury.

Nonetheless, the Warriors will likely tolerate short-term pain both because of their philosophy and circumstances. Kerr has historically placed health as the team’s most important variable to manage. Therefore, don’t expect Green and Thompson to have an increased burden since that would not only leave them more vulnerable to further injury. Poole, Wiggins and Kuminga have shown varying degrees of consistency, but they have all become capable of assuming larger short-term roles.

Either way, the Warriors are neither good enough to surpass the Phoenix Suns nor the Memphis Grizzlies in the standings. Nor are the Warriors bad enough to fall below where the Utah Jazz or Dallas Mavericks are in the seeding. That framework gives the Warriors some relative comfort level that they can simply concern themselves with maximizing health and building good habits so that they are ready to make a title run once Curry returns.

Will Kerr put Steph on minutes restriction when he comes back for the playoffs?

I suspect that Kerr will have Curry on a minutes restriction, even to open the playoffs. Consider how Kerr handled Curry’s workload in the 2018 postseason. After missing a combined 10 regular-season games and six playoff appearances because of a Grade 2 MCL sprain in his left knee, Curry came off the bench and played only 27 minutes in the Warriors’ Game 2 win against the New Orleans Pelicans in the West semis. Curry started after that, but still logged limited minutes in Game 3 (29 minutes) and Game 4 (31). 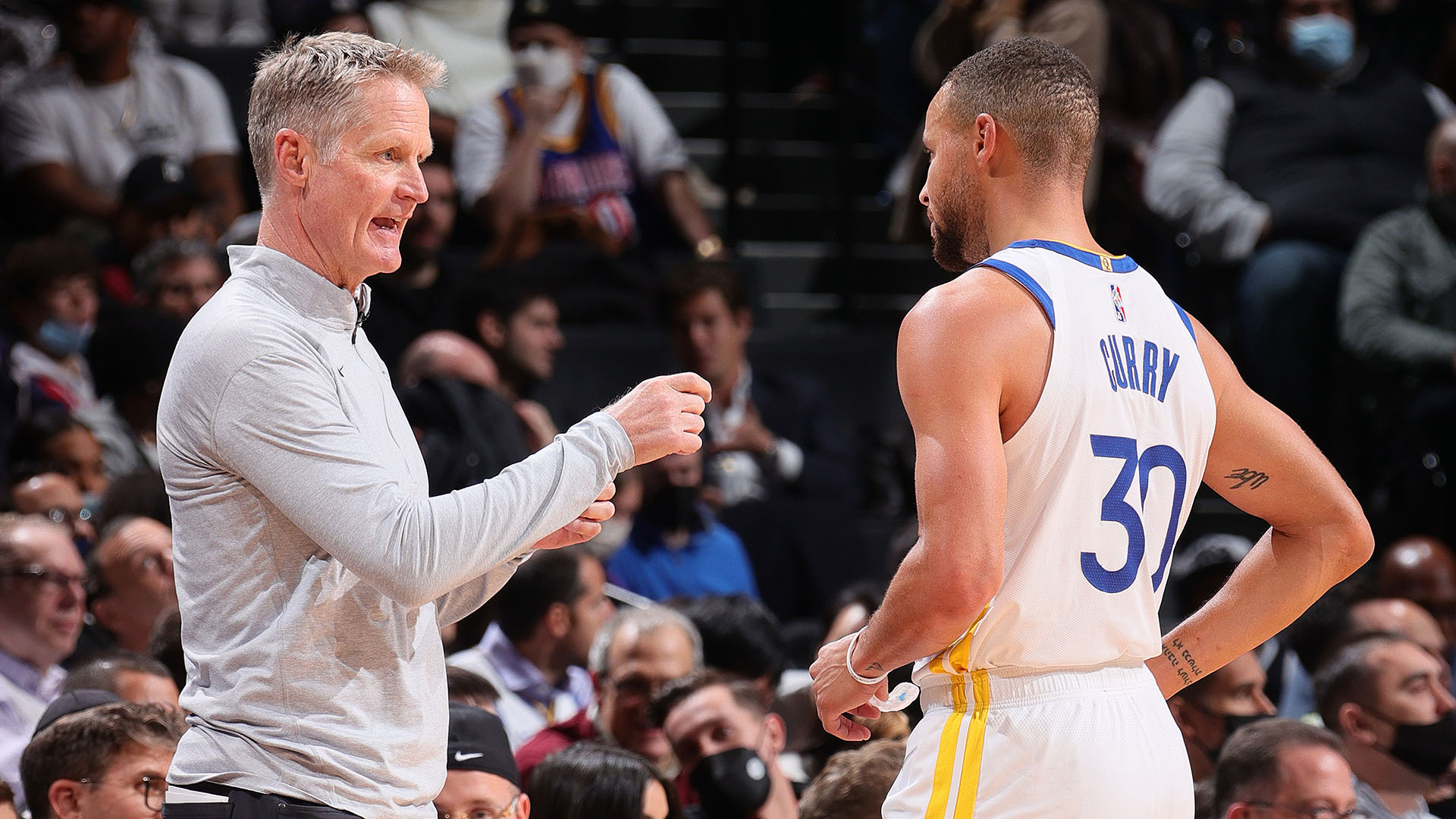 Warriors coach Steve Kerr may have to have star guard Stephen Curry on a minutes restriction once the playoffs begin.

I need to acknowledge the apples-to-orange comparisons here. One, the Warriors could also rely on Kevin Durant during Curry’s initial absence in 2018. Two, it initially appears Curry won’t have the same severity of injury as he did toward the end of the 2017-18 campaign. But the Warriors historically have always placed health as their biggest priority. Expect that the Warriors will neither rush Curry back nor give him a heavy workload once he returns.

What has to happen for the Lakers to get into the Play-In? Could AD be ready by then?

The Lakers have to finish anywhere between seventh to 10th in the Western Conference to ensure a spot in the Play-In Tournament. Mathematically, the Lakers have a chance to climb up in the standings. Realistically, they don’t. The Lakers have yet to prove they can build off of tremendous efforts, the latest including their overtime win on Friday in Toronto. Otherwise, the Lakers have become mired in inconsistency. Through that lens, the Lakers just need to ensure they can collect a handful of wins so that neither the Pelicans, Trail Blazers nor the Spurs supplant them.

Given the Lakers’ slim margin for error, however, they have no use to number crunch these scenarios. They just need to win as many games as they can. No doubt, Anthony Davis’ availability could factor into the Lakers treading above water. When that will happen, though, remains uncertain. Davis has completed shooting drills in the past week, but has yet to receive medical clearance to practice.

LeBron James piled up a 38-point triple-double in the Lakers’ win vs. Cleveland on Monday.

Regardless, the Lakers only face a best-case scenario with winning two Play-In games before losing to the Phoenix Suns or Memphis Grizzlies in the first round. Even with a fully healthy roster, the Lakers have not shown they can play consistently well enough to beat the NBA’s best teams.

Nuggets can win the NBA championship if ______?

There are so many qualifiers. If Nikola Jokic continues to play at an MVP level. If Michael Porter Jr. returns from injury. If Jamal Murray does the same thing. If the Nuggets’ role players play consistently. If the other top Western Conference teams have star players suffer major injuries.

The Nuggets deserve all the praise for their resiliency and team-oriented play. But assuming the Suns, Grizzlies and Warriors stay healthy, the Nuggets don’t have enough to beat any of those teams in a playoff series.

A unique talent with a special journey to the NBA, here’s an all-access look at reigning Kia MVP Nikola Jokic of the Denver Nuggets.

Would the Celtics be more dangerous putting Jayson Tatum in the point guard position rather than trying to get a star point guard?

Jayson Tatum is so talented that he can play at any position. Before joining the Celtics’ front office, former coach Brad Stevens played Tatum at the point guard spot last season when the team nursed some injuries to its backcourt. Philosophically, I’m not opposed to this idea so long as the Celtics acquire other wing players to relieve Tatum’s workload.

It’s not like Tatum is trying to fight Father Time – he’s 24 years old and in his fifth NBA season. But it wouldn’t be fair to Tatum to have him play a hybrid point guard / wing role without any reinforcements. The Celtics are better off trying to ensure that Tatum and Jaylen Brown have good complementary teammates around him than asking them to do more. They already have done enough.

Jayson Tatum continues to stay hot as the season wears on for Boston.

Question: What was the lowest-seeded team that won the NBA championship? (via @mrjongjongz)

Answer at the bottom

Hoops Around the World

Got a good basketball story to tell? Write it up and send it my way. The best essays will be used in this feature throughout the season.

We’d also love to see a photo of the hoop you play on, whether it be in your neighborhood gym or in the backyard of your driveway. Got a good image? Then pass along and we’ll feature it.

The 1994-95 Houston Rockets. Despite entering the NBA playoffs as a sixth seed in the Western Conference, the Rockets defended their NBA championship after overcoming two 2-0 deficits in the first round (Utah Jazz) and the semifinals (Phoenix Suns). With Hakeem Olajuwon, Clyde Drexler and a strong supporting cast, the Rockets then breezed through six games in the Western Conference finals (4-2 series win vs. San Antonio) and four games in The Finals (Orlando Magic).

Watch how the Rockets earned the title of dynasty with their back-to-back championship in 1995.

* * *
NBA Digital Sr. Analyst Mark Medina will be answering questions each week in his NBA Mailbag.