Those associated with Chelsea have long since known that their club exists on the footballing equivalent of a fault line. There has been nothing as seismic as events of recent weeks, of course, but amid the aftershocks of change silverware has invariably fallen into their cabinet.

Chaos off the field usually precipitates consistency on it, and this was a fourth straight win since government sanctions were imposed on their soon-to-be former owner Roman Abramovich just 10 days ago.

Much like their midweek Champions League victory in Lille, it moves Thomas Tuchel’s side one round closer to a trophy that is beginning to feel like something of an inevitability if history is to be repeated. 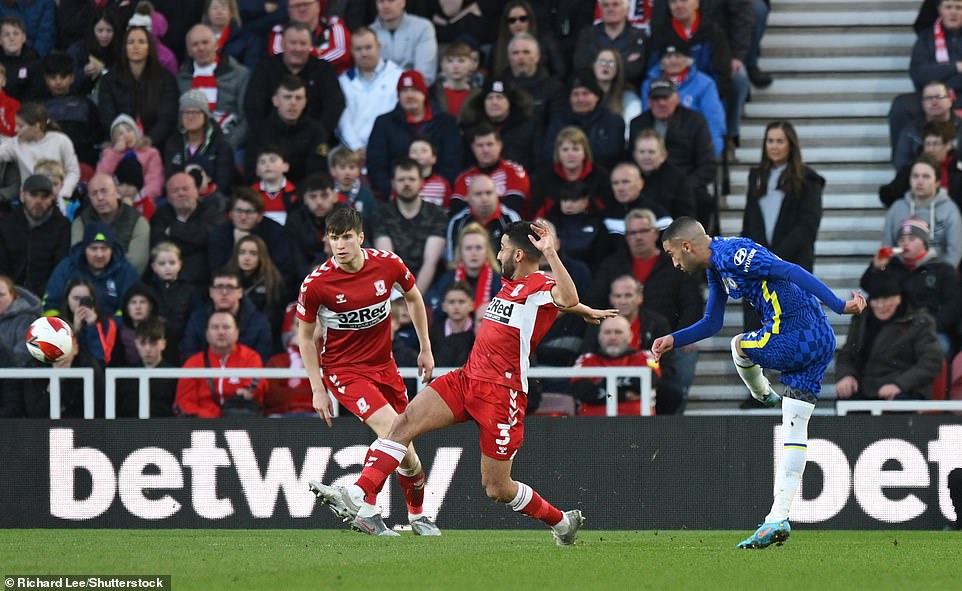 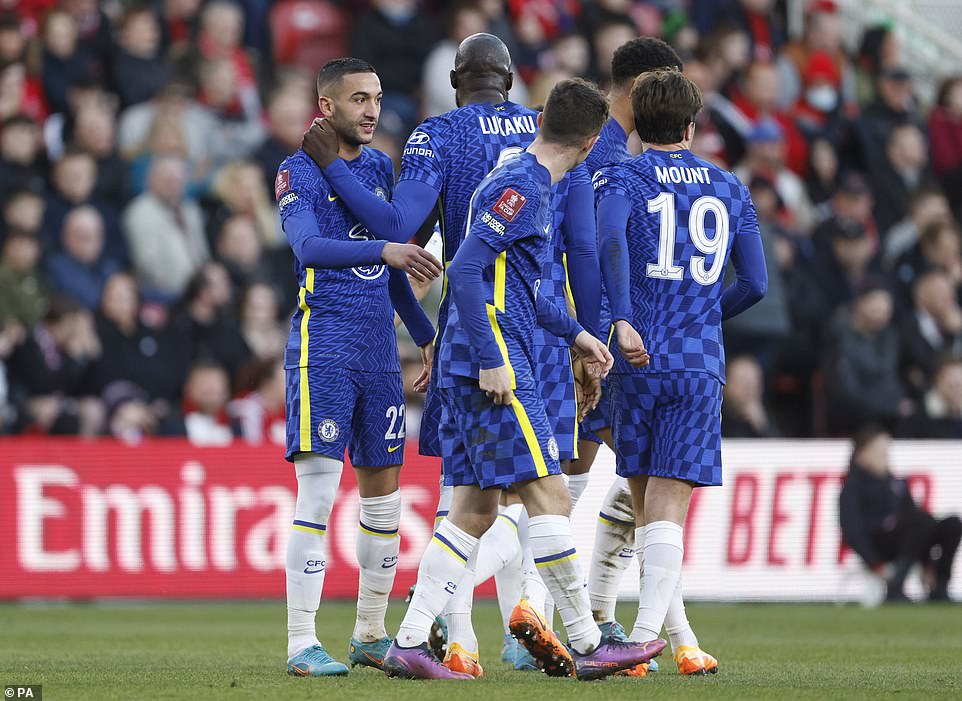 It was only last season that the sacking of club legend Frank Lampard and Tuchel’s subsequent arrival brought about an improvement culminating in a second European crown of the Abramovich era. The first was achieved in 2012 under Roberto Di Matteo, a caretaker in the job for less than three months. When Chelsea throw their cards in the air, they tend to come back down as ticker tape.

And here we are again, to the backdrop of turbulence, a team who look the picture of calm. An FA Cup semi-final at Wembley is the reward for this comfortable win, secured thanks to goals from Romelu Lukaku and Hakim Ziyech.

‘I am super happy,’ declared Tuchel. ‘We were very focused. We defended as a team and attacked as a team. On the ball, we were calm and controlled the match. ‘ 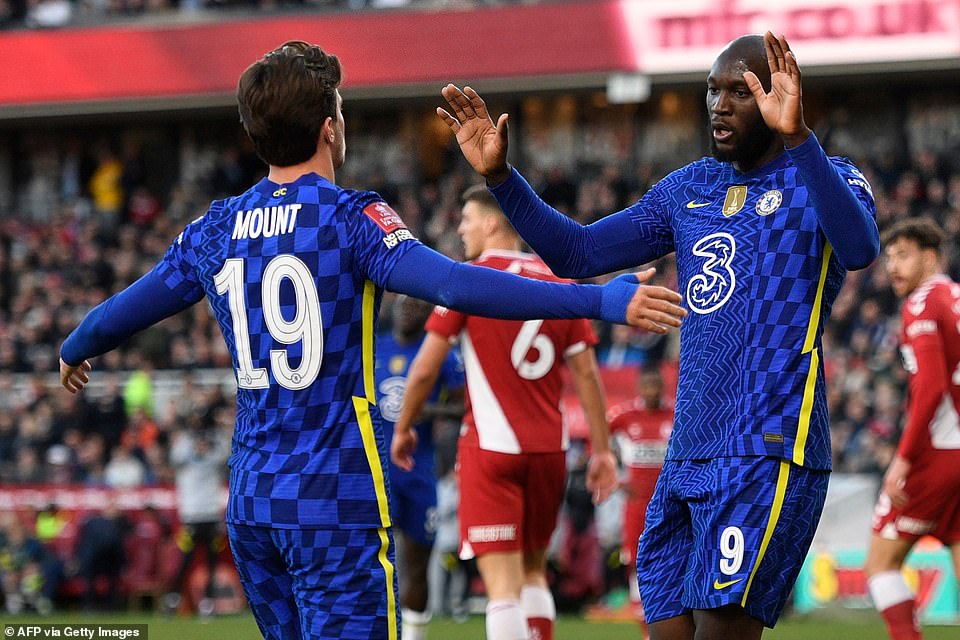 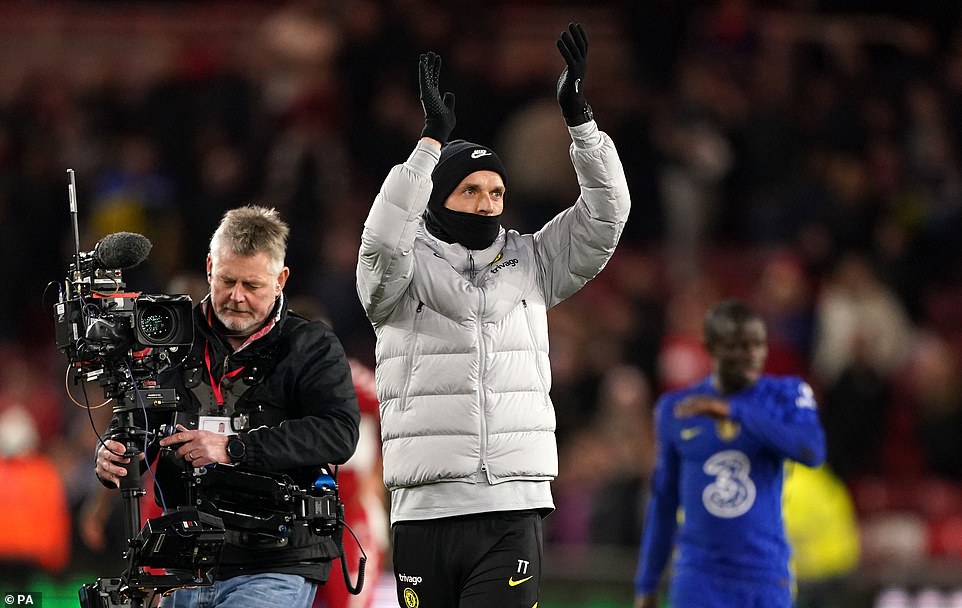 Second-tier Middlesbrough failed to match the gallant effort of previous rounds against Manchester United and Tottenham. There is no real shame in that considering Chelsea are the current world and European champions, but boss Chris Wilder has standards that demand better than what his players showed in allowing the visitors to cruise into a two-goal lead inside half an hour. They showed plenty of desire thereafter and exit the competition with pride.

‘I am still disappointed,’ said Wilder. ‘The goals were obviously difficult for us to take and were preventable. But their counter-attacks were excellent and they just showed their quality in key moments. ‘

It might have been different had the Blues been forced to journey by bus to Teesside. A late reprieve under the terms of the government license allowing them to operate meant they instead took a flight to the North-East. It was Boro, by contrast, who never got off the ground.

They lacked the spikiness of their chairman Steve Gibson, who this week branded Chelsea’s hierarchy ‘abhorrent’ and ‘rotten to the core’ after their request – later withdrawn – for all fans to be barred from the game on grounds of ‘sporting integrity’, given their own support was limited to 500 amid those sanctions.

You suspected Chelsea would be walking into a bear pit on the back of such animosity. What they found, at least in those opening 30 minutes, were teddy bears.

Tuchel had even picked what he must have considered a weakened team, given that Lukaku started. The last time the £ 97.5million striker was in from the off was the previous round at Luton, in which he scored the winning goal. His only other domestic effort of this calendar year came in the third round against Chesterfield, form figures to support the notion he acts best on the flattest of tracks. Here was another.

Chelsea’s opening goal, on 15 minutes, was a little too easy. It felt like one of those training-ground exercises often decried by players as pointless. You know the ones, the shadow drills against no opposition.

Ziyech rolled a pass down the right channel for Mason Mount to chase, unattended. He used that freedom to sweep a ball across goal and Lukaku, unmarked despite the nearby attendance of two red jerseys, turned in.

Their second was even easier. Knives have been met with more resistance when tackling butter. The attack began in Chelsea’s goalmouth and climaxed less than 10 seconds later in Boro’s goal.

Blues keeper Eduoard Mendy played the ball to defender Malang Sarr. From there, a simple slide into midfield to Mateo Kovacic and, in turn, onto Mount. He found Ziyech on the right and the winger, celebrating his 29th birthday di lui, slammed home from 25 yards. Even at this early juncture it had the feel of a cherry on his cake di lui. 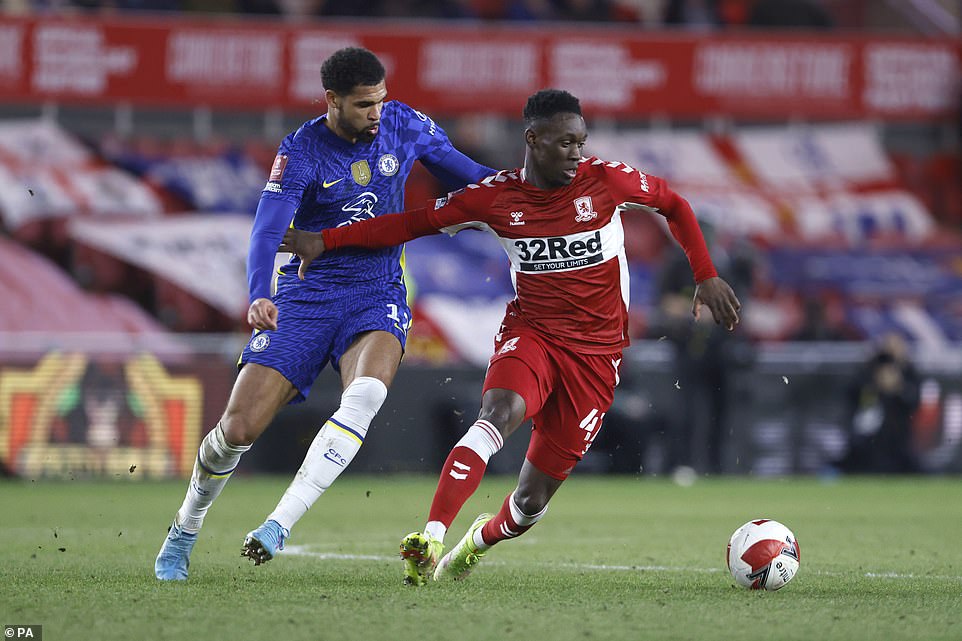 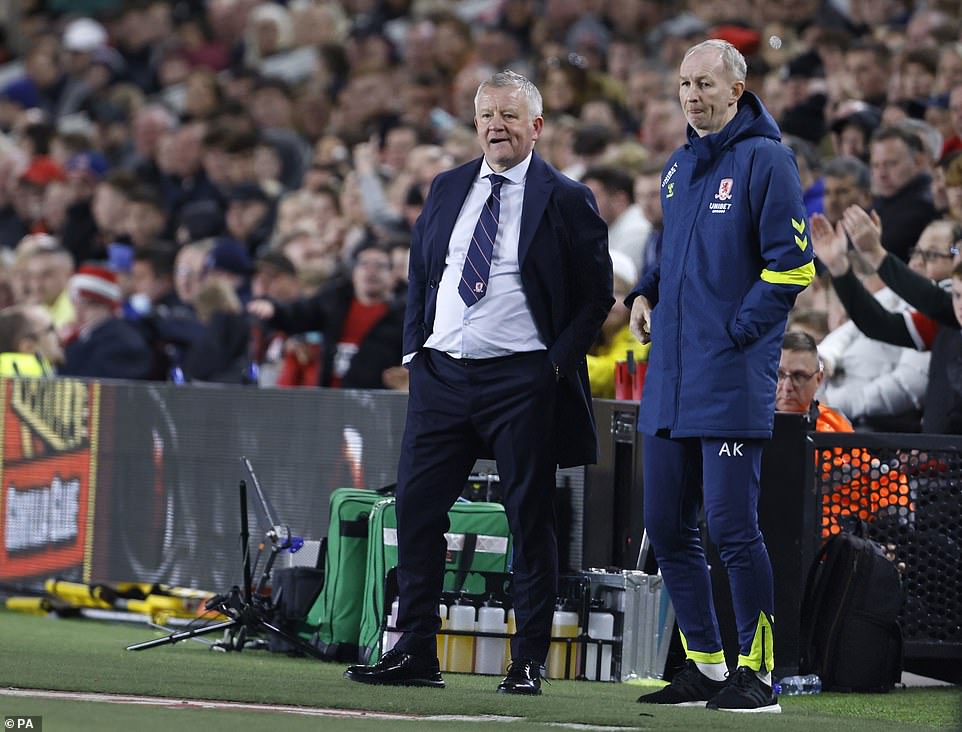 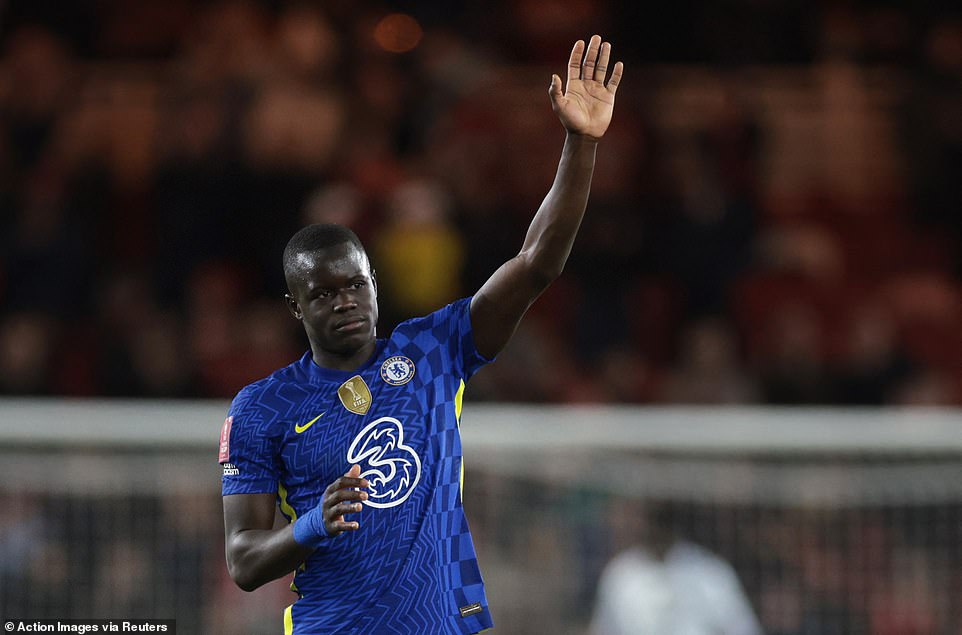 From there on in it was all relatively straightforward – and that is one word you would not use to describe the immediate future of Chelsea. The deadline to submit offers for the club passed on Friday night and a consortium led by American businessman Todd Boehly is seen as the leading candidate.

Tuchel said: ‘The offers are in now and the board tries to find a decision with the government as soon as possible.

‘But I am absolutely OK. I feel a responsibility because there are people at the club who are worried who are not in the spotlight or as privileged as me.

‘For them, it’s also my responsibility and everyone’s responsibility to show the right spirit, positivity, and not go into self-pity and worry about a situation we didn’t cause and can’t change.’ 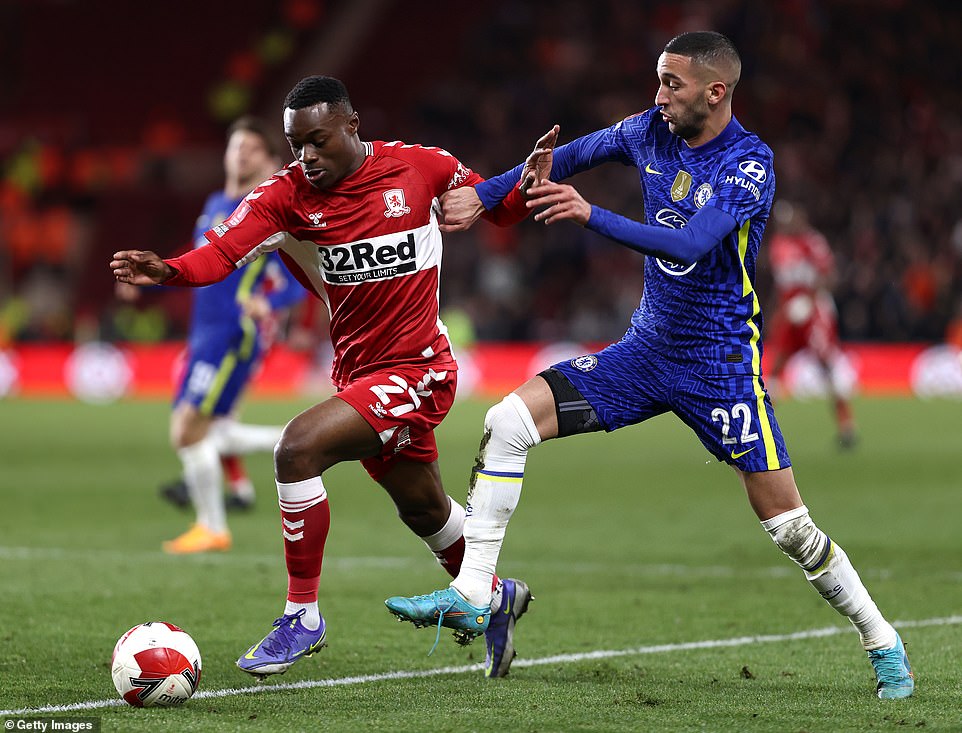 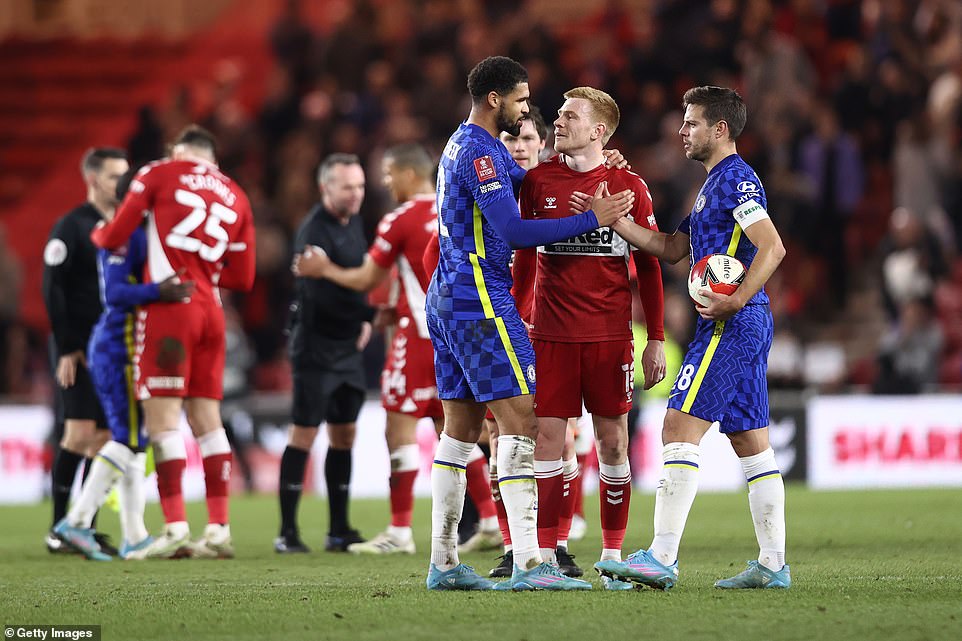 Tuchel insists his own future remains at Stamford Bridge. The German is working on the assumption that any owners prepared to pay the money to take on Chelsea must be motivated by winning trophies as opposed to financial gains. Maybe he has never heard of the Glazers. Ironically, it is their club, Manchester United, who are being urged to poach Tuchel. Frying pans and fires spring to mind.

And why would he abandon a club where turmoil has long been a key ingredient for success? It might not be popular in the wider context of current world matters, but Chelsea appear well set for an assault on two cup fronts as we head for the business end of the campaign.

Taking care of business off the pitch might not be so easy, but those on it are at least doing their bit to make their club a very attractive proposition.