Ralf Rangnick said Manchester United’s thrilling 4-2 win against Leeds was the “best possible answer” to dressing room stories about the club as he praised his players’ togetherness and maturity.

Elland Road’s first Premier League clash between these old foes in front of fans since 2003 lived up to the billing in torrential rain on Sunday afternoon in West Yorkshire.

Harry Maguire and Bruno Fernandes put Manchester United two goals up on enemy territory at half-time, only for Leeds to roar back with two goals inside a minute early in the second half.

The efforts from Rodrigo and Raphinha had Elland Road rocking, only for substitutes Fred and Anthony Elanga to seal a 4-2 victory for Rangnick’s men against their bitter rivals.

“We knew that it was an important win today,” interim boss Rangnick said after a week in which Harry Maguire and Marcus Rashford publicly dismissed talk of a divided dressing room.

“It was similar to the one against West Ham. That was similarly emotional at the end with the last-second goal. But today it was more important, not only that we won the game but the way that we reacted after conceding the equalizer.

9 – Manchester United have scored nine Premier League goals versus Leeds United this season, the most they’ve netted against the Whites in a single league campaign. Downpour.

“That was the best possible answer the team could give,” he added. “It was perfect with regard to maturity, unity and the best reply that they could give to some articles last week that there was some disruption in the locker room.

“I think a game like this one today you can only win as a team and with the mentality of a team and this was, apart from the three points, the most important thing.” 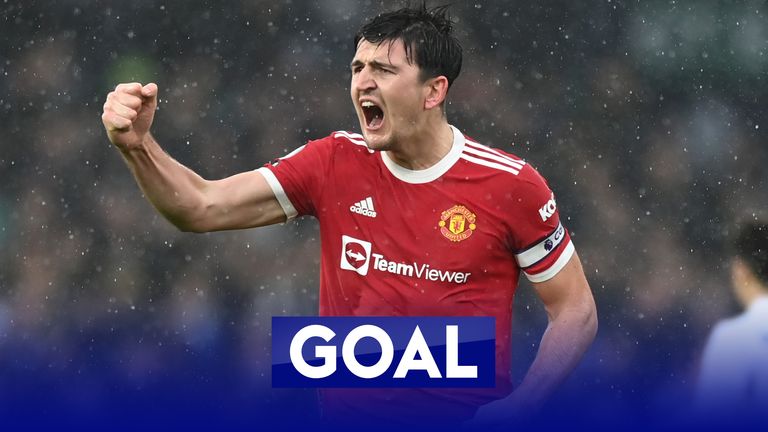 At the 139th attempt this season, Manchester United finally score from a corner as Harry Maguire heads in at Leeds

Incredibly, Maguire’s header was United’s first goal from a corner this season at the 139th attempt in the Premier League.

“I’m a big part of that set-play routine and trying to score from corners.

“But as a team, we’ve been nowhere near good enough. If we scored more from set-pieces, we’d be higher up the table.”

Elanga struck by object thrown from the crowd

Rangnick punched the air in front of the traveling fans at the end of a game in which supporters traded unsavory chants.

“As far as I know, there is some investigation going on from Leeds United,” Rangnick said. “I don’t think that anything happened in the end. Anthony Elanga looked well and he was happy about scoring his goal.

“Obviously things like that should not happen and I think even more so this game. The atmosphere was great.

“At times we had to cool down things on the pitch a little bit but this is what I did when I walked onto the pitch (during a late melee). I didn’t want anything to happen – no yellow or red cards.

“In moments like this, I think it’s important to try and cool things down.”

Leeds counterpart Marcelo Bielsa said he did not see the incidents involving objects being thrown but condemned such actions.

“Any excess other than sporting should not be approved,” he said. “I can’t evaluate what you spoke about because I didn’t see it.”

Bielsa worried by Leeds’ fall down the table 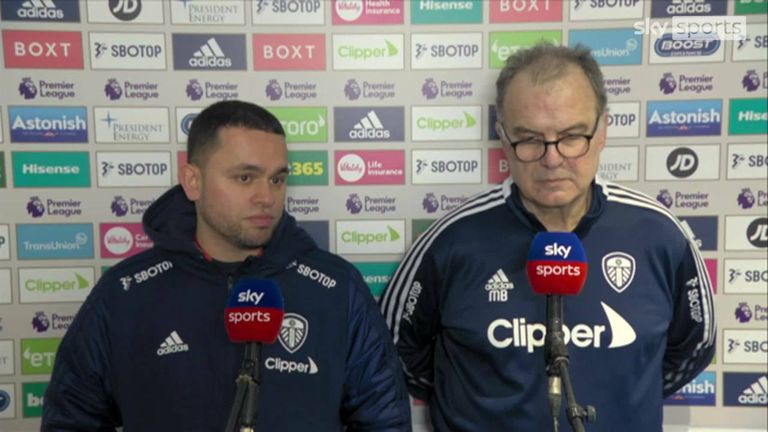 Marcelo Bielsa admits he is worried by the number of goals that Leeds are conceding, after a 4-2 defeat to Man Utd meant the Yorkshire club have now conceded 50 goals in the league

But Bielsa acknowledged his concern over Leeds’ ongoing defensive fragility and their proximity to the relegation zone.

“It is impossible not to be worried,” he said. “We have conceded 50 goals.

“Do you think I cannot be worried? How can I not feel responsible?”

However, the Argentine said he was proud of his players’ fighting spirit and that they did not get what he felt they deserved from the game.

“The effort the team made you can value it, but the relationship between what you get and what they produced is enormous in football,” the Leeds boss said.

“To not fight would be a sign that is worrying and to fight is a starting point. But it is not the only thing.”

Leeds, who have taken one point from their last four matches, remain five points clear of the relegation zone and face Liverpool, Tottenham and Leicester in their next three games.

When asked if he saw enough from his side to make him confident of retaining their Premier League status, Bielsa said: “Yes, I did.”

Bielsa: Lack of a defensive midfielder cost us

Bielsa has refused to blame his side’s struggles this season on a catalog of injuries, but conceded they came unstuck against United due to the lack of a defensive midfielder.

Kalvin Phillips has been sidelined since December, Robin Koch was forced off after a collision and Pascal Struijk was deployed in defense.

“It’s difficult for us to prevent the opponent from creating danger and to form a more compact block is not simple,” Bielsa said. “The fundamental problems are in the recovery of the ball in the middle of the pitch.

“Due to the absence of three players who can do that function, the composition of the midfield doesn’t have a defensive profile and that had an influence in the defensive behavior of the team today.”

Watch free highlights of the four midweek Premier League games – including Liverpool vs Leeds and Burnley vs Spurs on Wednesday – on SkySports.com and the Sky Sports App shortly after full-time.

Watch Soccer Special on Sky Sports PL and SSN from 7pm on Wednesday.