Alexis Sanchez must have felt his miserable days of loathing in England’s north-west were behind him. He was wrong.

Sanchez – now an Inter player after such a dismal time at Manchester United – had a defining influence on events at Anfield but for entirely the wrong reasons.

Having just seen his strike partner Lautaro Martinez drive the Italian team into a second-leg lead with a superb goal on the hour, Sanchez was doubtless readying himself to be part of a late cavalry charge towards the Anfield Road End. One more Italian goal and this tie was heading for extra-time. 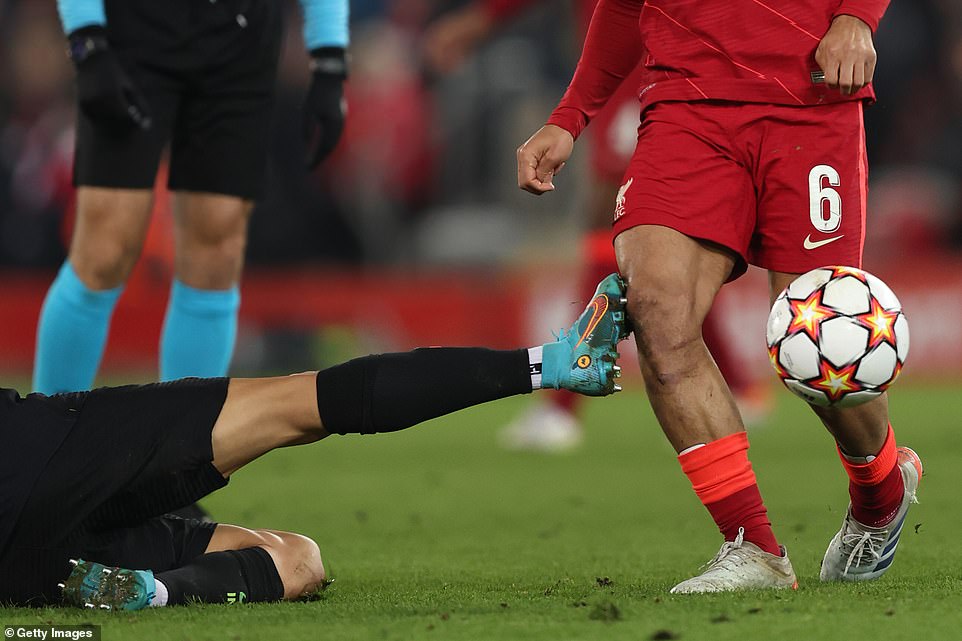 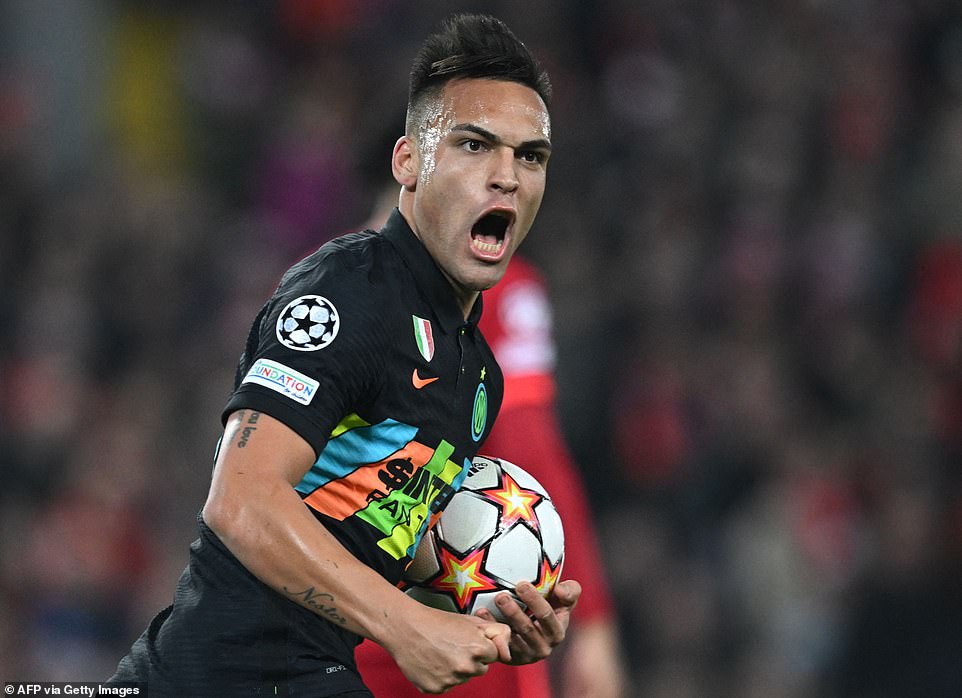 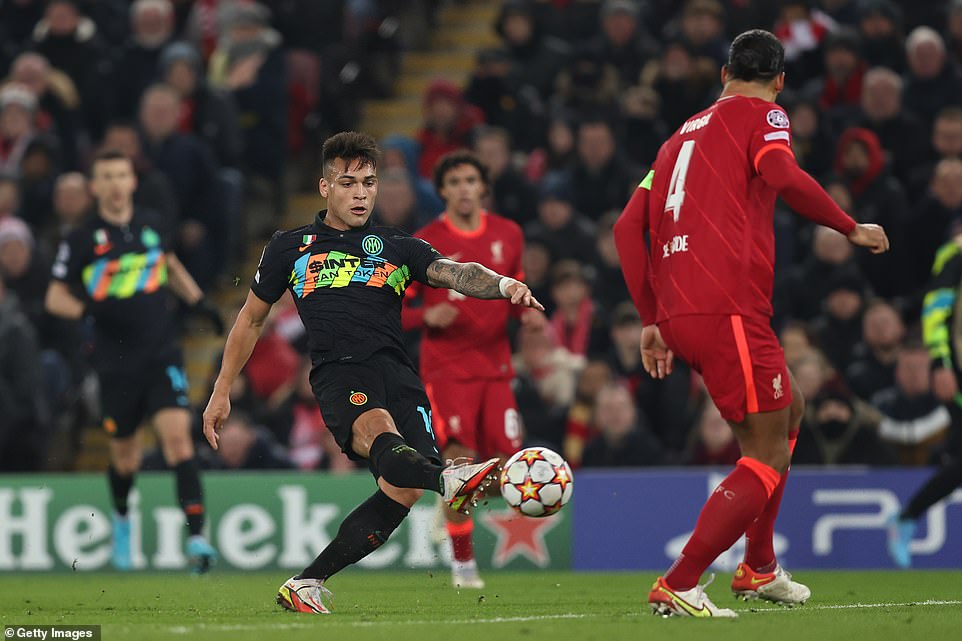 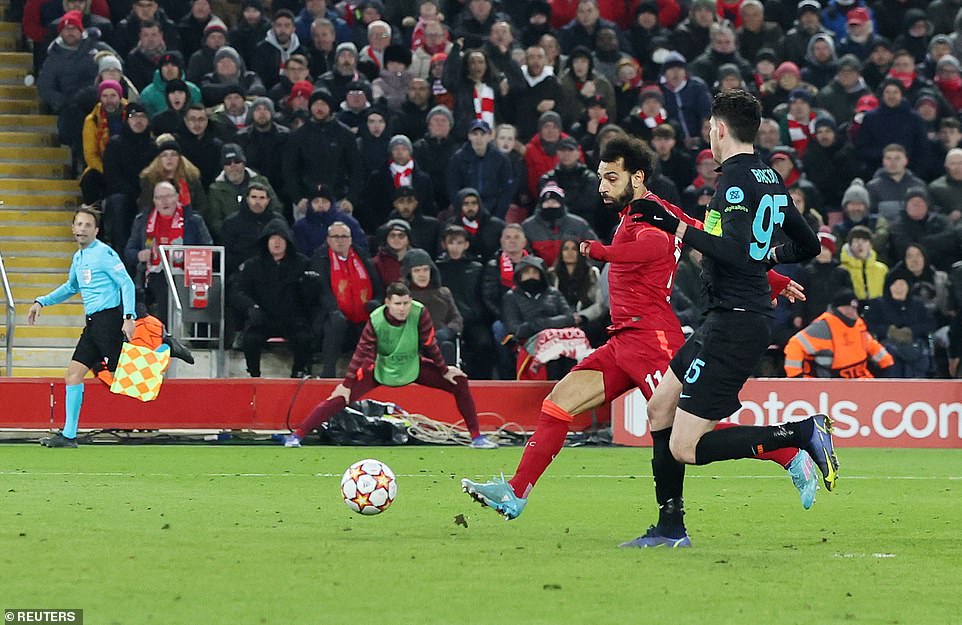 Mohamed Salah hit the post twice on the night, and Liverpool three times, but the Reds still managed to hold on to progress 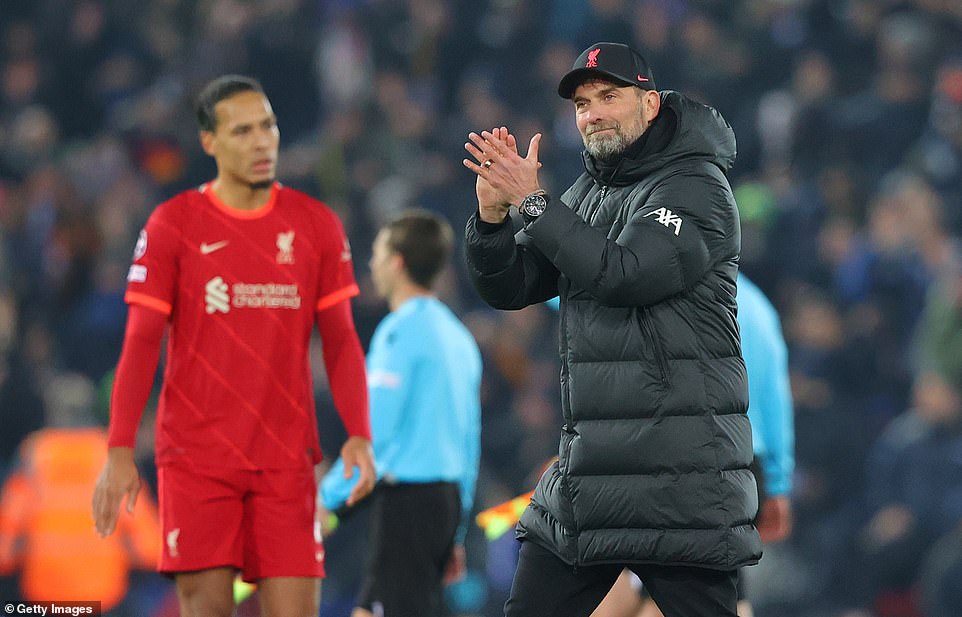 But within minutes the Chile forward was off the field.

Booked in first half added time for a foul on Thiago Alcantara, Sanchez was clumsy again in making contact with another Liverpool midfielder, Fabinho.

This time, Sanchez’s contact with his opponent looked less than intentional as he stretched and initially made contact with ball. But the 33-year-old could not claim to have been in control and amid prolonged Italian protestations, Sanchez eventually left the field and took the wind from Inter’s sails with him. After that, Simone Inzaghi’s team failed to create a single further chance of note.

So Liverpool are through to the last eight of their favorite competition once again. They largely have their 2-0 first leg victory at the San Siro thank and now have a first home defeat in a year to reflect on. But that is nothing more significant than a statistical anomaly. Liverpool’s momentum in league and across cup competitions remains.

Jurgen Klopp’s team were not at their best here but there is a resilience about them at the moment and it was largely this that got them through on night when conditions made it difficult to play consistently productive football.

Across the north-west earlier in the day, it felt very much as though spring was almost with us. Here at Anfield, perched on its hill above the Mersey, winter quickly reminded us that it was not ready to release its grip just yet. It was cold and, more pertinently, windy which did little for the quality of the football.

At one point in the first half, Mo Salah looked to control a ball dropping from the sky with all the certainty of a fielder looking up in to the sun at third man.

Salah, it transpired, was to be the recipient of Liverpool’s two best chances in the second half. He was to strike both of them against either post at the Kop End.

Prior to that, there was a first half that was mildly engaging but lacking enough energy to ever bring the home crowd in to the contest.

Liverpool central defender Joel Matip headed a free-kick against the crossbar just after the half hour and then his partner Virgil van Dijk nodded the resultant corner wide off the shoulder of a defender. At the other end, Inter threatened to create opportunities but much of their better football broke down with the final pass. 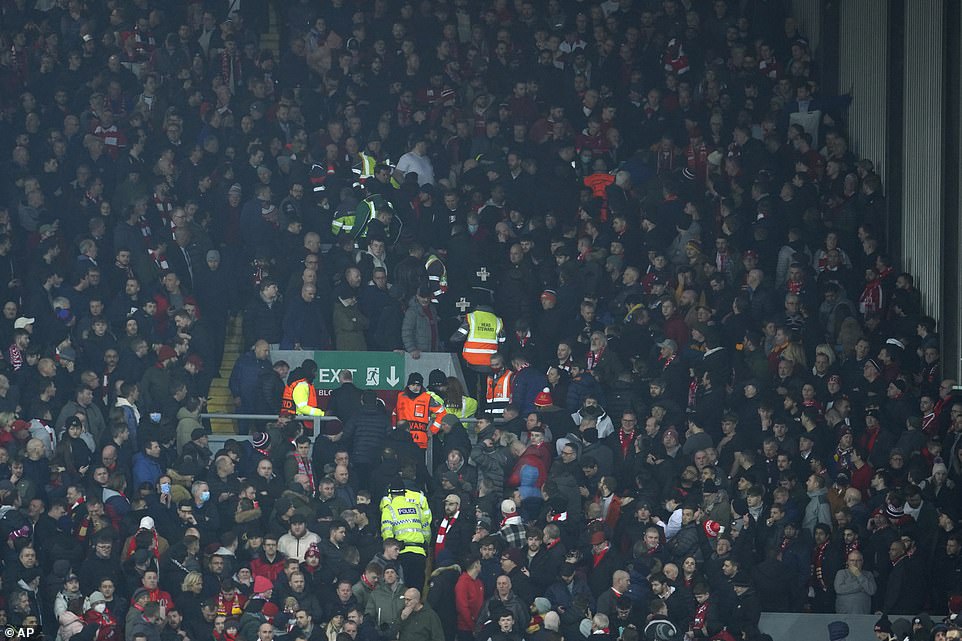 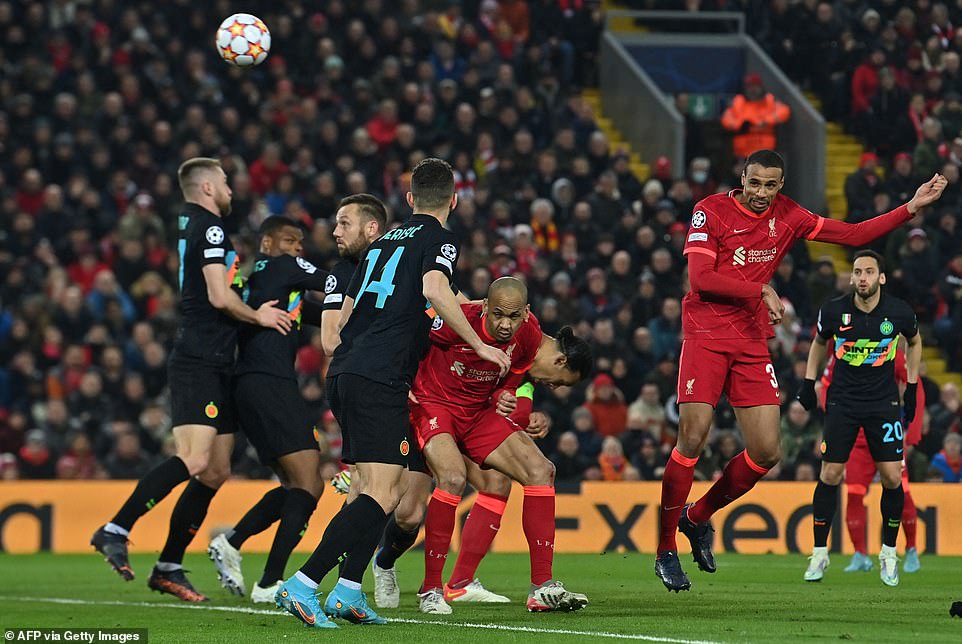 Joel Matip came the closest to scoring in the first half, planting his header from Trent Alexander-Arnold’s free-kick on the bar 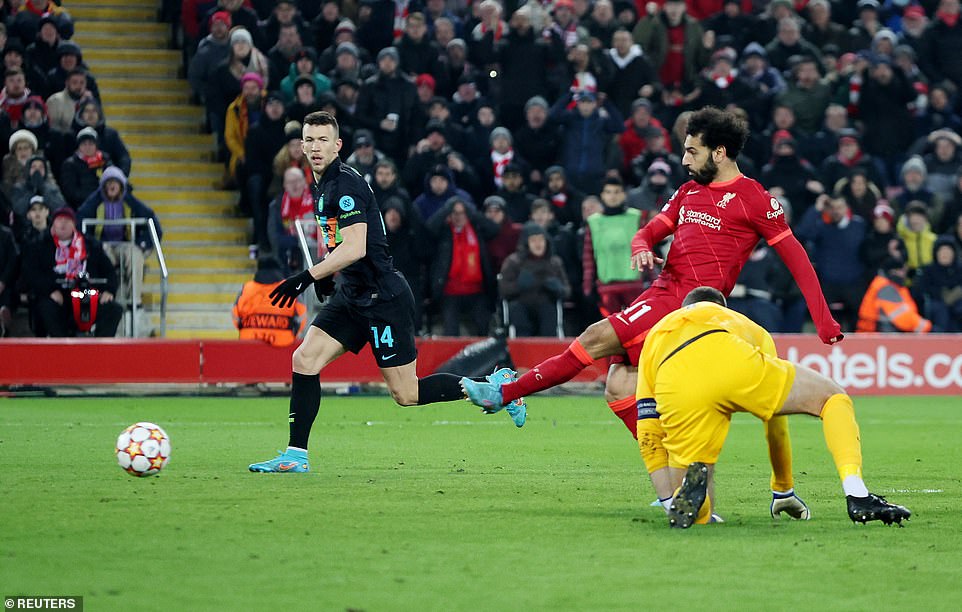 Salah should then have scored in the 52nd minute, striking a post after goalkeeper Samir Handanovic had left his goal open

Trent Alexander-Arnold – in good form at the moment – cut out a dangerous pass from Sanchez towards Martinez while Liverpool goalkeeper Alisson had to watch a low free-kick from Hakan Calhanoglu right on to his gloves as it came at him, swerving through a crowd of players.

Early in the second half Liverpool were on top. Salah should have scored after Inter goalkeeper Samir Handanovic had left his goal to dive at the feet of Diogo Jota. Instead the Egyptian struck a low shot against the post.

And then, almost out of nowhere, Inter scored.

A clearance up the line from Matip was not struck well enough and allowed Inter to return the ball forward. Sanchez moved it on to the dangerous Martinez and the shot from the angle of the penalty area that followed flew like an arrow past a rather ineffective challenge from Van Dijk across and above Alisson in to the far top corner.

In an instant, there was an electricity surge across Anfield. Liverpool had seemed utterly comfortable to the point that they were almost coasting. Now, with the Italian support ready to aid their team’s comeback, Inter appeared set for a tilt at parity over the course of the tie. 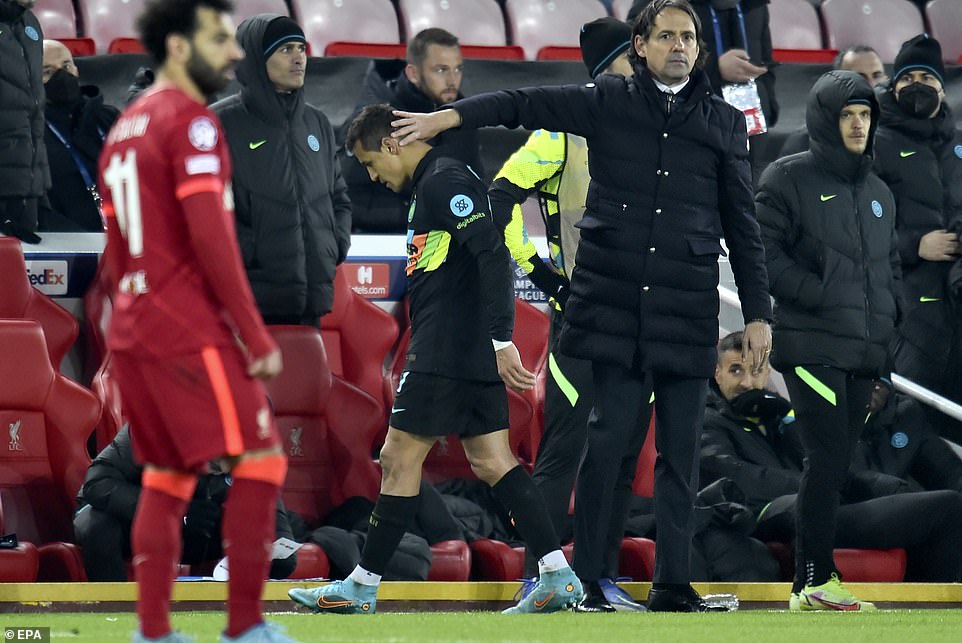 But just as an assault on the Liverpool goal seemed likely, Inter were reduced to 10 players after Sanchez caught Fabinho 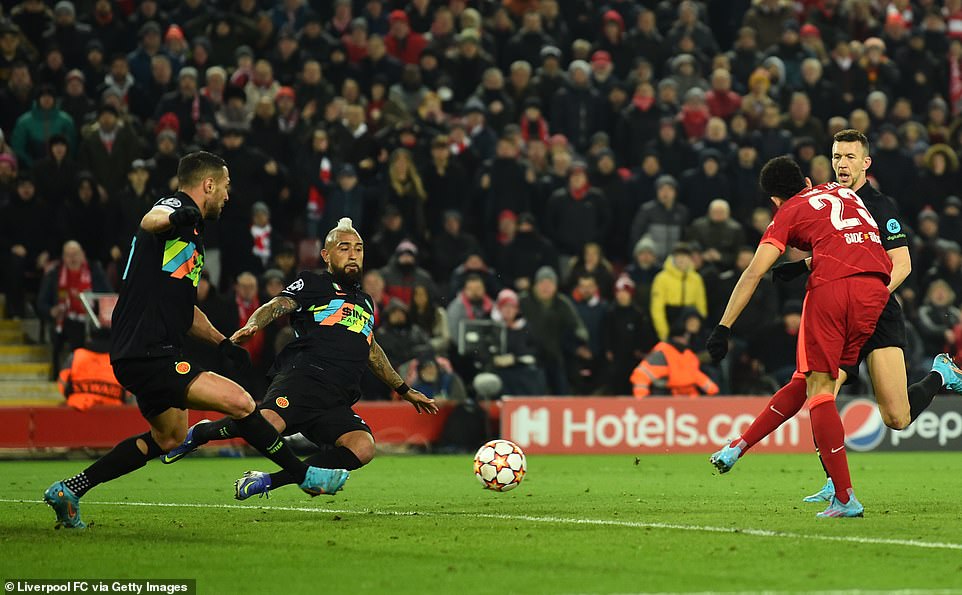 Sanchez’s exit changed everything, for sure. It took all of Inter’s newly discovered momentum from them and from that point on Liverpool were able to see the game out.

Salah could have scored in the 77th minute after a drifted pass from Sadio Mane found him free of Italian attention inside the penalty area. The shot was taken first time on the half volley back across the goalkeeper but this time the other post got in the way.

Late in the day substitute Luis Diaz was denied a first European goal for Liverpool by a fabulous tackle on the six-yard line by Arturo Vidal. By then, though, all that mattered was that Liverpool kept late drama out of the conversation.

After the game as Inter coach Inzaghi spoke of his upset, Klopp suggested everything had turned out ‘just about fine’. It was a neat way of putting it.

RE-LIVE ALL THE ACTION WITH SPORTSMAIL’S KIERAN JACKSON: