STUMPS, DAY 2!Another day of Test cricket, and another day that belonged to India. They first bowled SL out for 109 and then piled on the runs thanks to fifties from Pant and Iyer. They got to 303/9 before declaring with a lead of 446. Thereafter Bumrah does what Bumrah does best and struck in the first over to give India the advantage going into the last half hour. However, Sri Lanka did well to see the Indian bowlers off, batting out the required 7 overs with no further damage, ending the day on 28/1, behind by 419. Join us tomorrow to see if Sri Lanka can fight back, if at annex Goodnight and bye bye!

Bumrah strikes in the first over with Thirimanne trapped leg before.He reviews but to no avail. The ball swung in and the batter couldn’t get his bat down in time. Sri Lanka are 0/1.

India declare with a lead of 446.Praveen Jayawickrama finishes with 4 wickets while Lasith Embuldeniya has 3. Shreyas and Pant got fifties but India overall scored at a very good rate. This is the last time Lakmal has bowled for Sri Lanka. He’s retiring after this Test. Sri Lanka’s batters have 11 overs to negotiate today.

Shreyas is given out leg-before. He reviews.Three reds and he has to go for 67.

An edge and the keeper takes it.Ashwin falls and India are 7 down

But Jadeja is bowled in the same over!The delivery clipped the front-pad and then bounced onto the off-stump.

50 for Shreyas!His second fifty in the Test. Gets there in quick time as well.

Shreyas Iyer was given out three short of a 50.But he reviews and survives.

We’re back for the final session

DINNER! India lead by 342 going to the break at 199/5.Another session where India scored over 100 runs. This time led by Pant’s 50 – the fastest for an Indian in Tests. He scored all around the park as India piled on 138 runs in the session in 29 overs at a rate of 4.76. Sri Lanka would’ve been happy with those early wickets, but they couldn’t stop Pant. How long before India declares? Join us after the break.

Pant is caught & bowled off a skier after that entertaining fifty.Jayawickrama has his third. India’s lead is 327.

FIFTY FOR PANT! What an innings this has been!50 in just 28 balls – the fastest ever by an India. This stand is demoralizing for Sri Lanka. He attacked from the onset and there was no relenting. 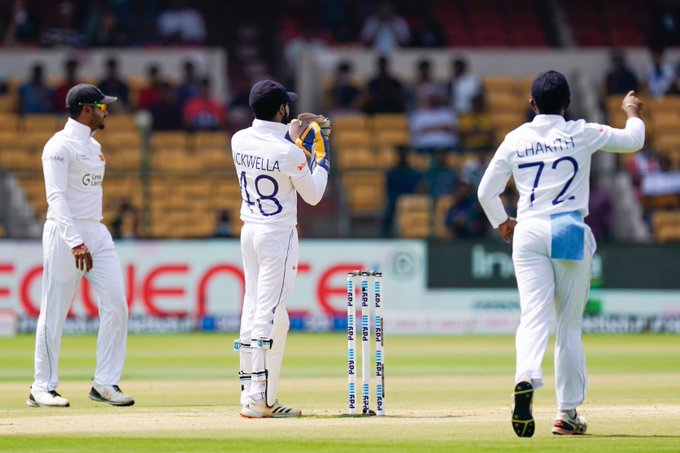 Wasted review for Sri Lanka!They thought Shreyas Iyer would’ve nicked it, but the sound was of the ball clipping the pads. They review, but to no avail.

Kohli falls and silence engulfs the Chimmaswamy Stadium!This one from Jayawickrama kept low and struck Kohli plumb on the pads. Two in two for him.

Vihari follows his skipper. Looks to play the sweep but misses. Vihari departs for 35 – he was looking solid in the middle. Big wicket for Sri Lanka. Jayawickrama, who returned after he had injured his foot picks a wicket.

Rohit and Vihari have added over 50 runs together

We’re back for the second session

TEA: India extend lead to 204.India’s session again – they go into the break on 61/1 to pile on the agony on Sri Lanka. The visitors folded in just 35 balls this morning, after which a couple of missed chances have pegged them further back as India’s batters have made the most of the reprieves. Can Sri Lanka pick up quick wickets in the middle session? Join us after the break.

OUT! Agarwal edges to slip and is caught this time.Throws away a good start – falling for 22. Sri Lanka strike! He was looking to defend, but gets an edge.

Dropped!Rohit is handed a life after being dropped at slip by Thirimanne. Was a regulation catch and it should’ve been taken.

Ouch!Jayawickrama seems to have done something to his ankle there. He leaves the field … he’s unable to even walk. Supported by the physio and the support staff.

India’s openers are in the middle

Sri Lanka are bowed out for 109!Didn’t even take half an hour into Day 2 for India to pick up the remaining 4 four Sri Lankan wickets. India pick up a massive 143-run lead. Just 35 balls were needed on the day to bowl the opposition out. Superb from India who kept the pressure on. Fernando was the last man to go, stumped off Ashwin. It’s Sri Lanka’s second-lowest total against India. They haven’t reached 200 in this series yet.

Bumrah has a 5-wicket haul!A quick bouncer and Dickwella gets some glove on the way to the ‘keeper. It’s Bumrah’s first 5-fer in India.

Got ‘im!The carrom ball from Ashwin, was quicker and fuller and has Lakmal knocked over. Sri Lanka are 8 down.

Oh, India have struck already! It’s a dolly for Pant with Embuldeniya gifting his wicket away. Bumrah has his fourth. SL are 7 down …

Hello and welcome to the second day’s play at the Chinnaswamy Stadium in Bengaluru. 16 wickets fell on Day 1, the pink ball again proving to be a tough challenge for batters in both camps, but India’s No. 6 Shreyas Iyer stood out with a score of 92 on a difficult track that had a lot in it for the spinners and pacers. Sri Lanka then looked all at sea against India’s pacers under the lights, what can they conjure today?

While we wait, why don’t you read this match copy from Kaushik Rangarajan. He’s digs deep into Iyer’s fantastic innings. “The knock was for most parts a workshop in batting on a turner, and in lesser parts recipient of Sri Lankan benevolence,” he writes.