File this one under ‘sucker-punch’ for Jesse Marsch. Leeds United had dominated, managed four times as many shots as Leicester City, then were undone by a simple one-two.

Harvey Barnes scored and from the Leeds supporters came a chant: ‘Marcelo Bielsa, Marcelo Bielsa.’ Not what Marsch wanted to hear, really – a reminder of what he must try to live up to.

At full time, Marsch ordered each and every one of his players, substitutes and staff members on to the pitch. They stood in a huddle in the center circle and he delivered a speech.

You imagine he was reminding them of how, on another day, they take their opportunities and win this clash. 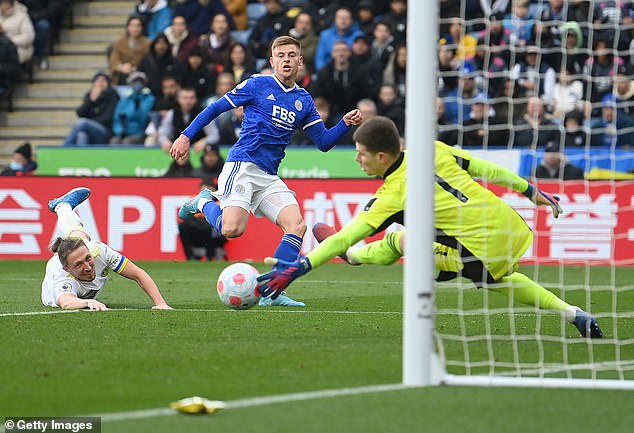 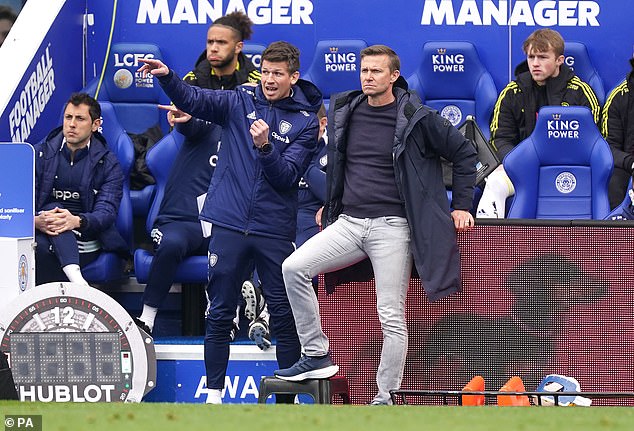 That was the lesson here for the American making his Premier League managerial debut: take your chances.

Leeds could have scored through Dan James, Raphinha, Rodrigo, Jack Harrison, Joe Gelhardt – take your pick, all had crucial chances at the King Power Stadium – but they just couldn’t beat Kasper Schmeichel.

It was an encouraging performance for Leeds if nothing else. They started at 100mph, flying forward whenever they won the ball and looked lethal on the counter-attack, but the win simply wasn’t to be.

When Leeds next take to the field against Aston Villa this Thursday, it will mark 100 days since their last clean sheet in a 1-0 Premier League win over Crystal Palace on November 30.

That’s a problem, and one Marsch will try to solve over the coming days on the training ground.

They sang his name. They unfurled Argentinian flags. They held up a banner bearing his nickname ‘El Loco’ and another which said: ‘Thank you for the memories.’ Leeds supporters won’t forget Bielsa. Now he’s gone, though, it’s over to Marsch to show what life under him will be like.

We had our first taste after a single minute. Leeds won possession in midfield and Harrison’s first thought was to play it forward. He found James, who forced Schmeichel into a finger-tipped save. Not a bad start for the lively-looking visitors.

Cameras cut to Marsch, who scribbled tactical something in his notepad. Either that or he underlined the word ‘fast’ next to Jamie Vardy’s name.

The Leicester striker was stretching his legs on his first start since December with Pascal Struijk cautioned for dragging him down during one race behind the Leeds back line.

Schmeichel was needed to make another smart save in the 10th minute when a lightning counter ended with Harrison striking for the far corner. An outstretched leg from the Leicester goalkeeper denied Leeds the lead. 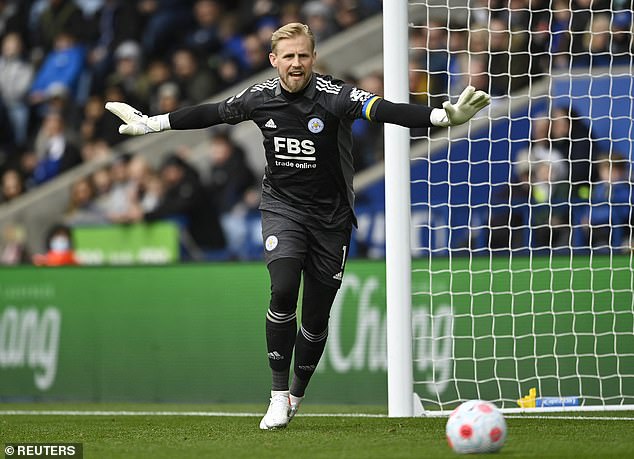 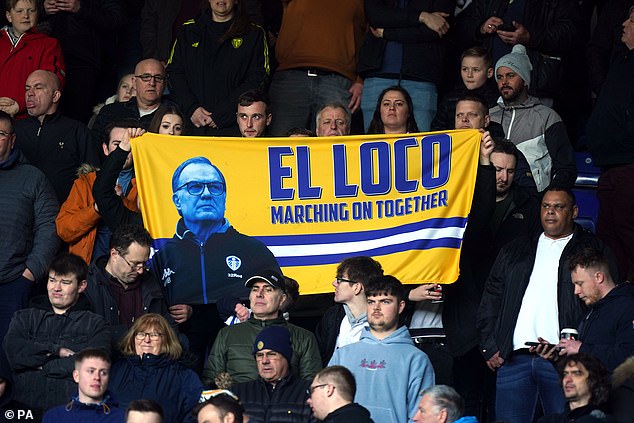 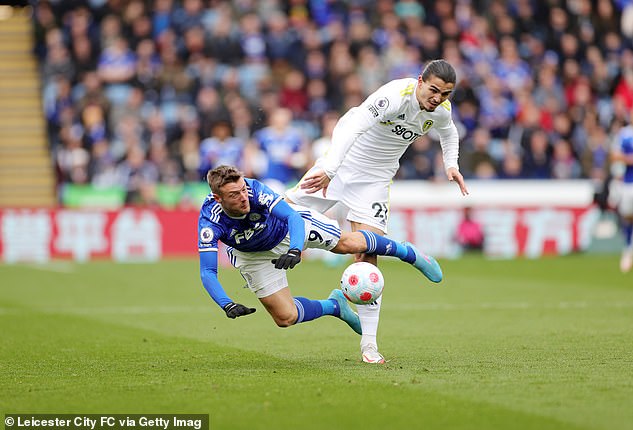 Marsch had his men set up narrow when they had the ball and so it was down to the Leeds full backs to give the team width. Good job their last manager had them run drills called ‘murder-ball’ in training. They were fit enough to do as told.

Leeds could have scored after 22 minutes but Rodrigo’s radar was off as he fired over from Harrison’s cut-back. Still, the supporters liked what they were seeing. What followed was a first chant for the new coach. ‘Jesse, Jesse Marsch,’ they sang. It was music to his ears di lui.

Harrison then fired a low cross through the six-yard box which was begging to be buried. The 25-year-old had been at the heart of everything for Leeds, creating more chances than he’d managed in any other Premier League match this season. Talk about impressing the new boss. 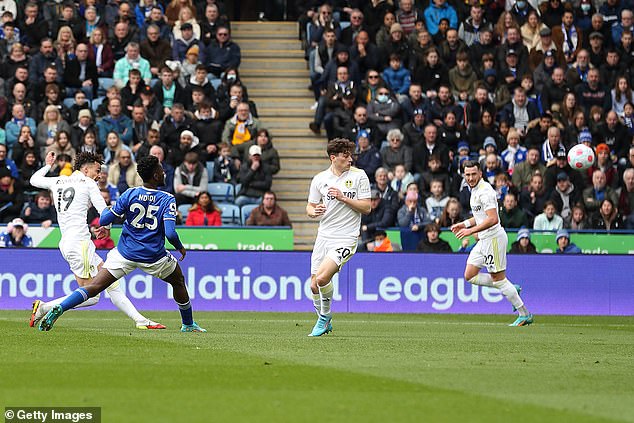 Leeds wanted a penalty when Caglar Soyuncu swung for the ball but only kicked Rodrigo’s foot instead. The 30-year-old dropped down like a ton of bricks to try to force referee David Coote into a decision. He gave nothing, and neither did VAR Jarred Gillett.

After 40 minutes, Rodrigo’s cross fell to Junior Firpo, 10 yards out and with all of the goal to aim at. He struck his shot with venom, but Soyuncu made the block to keep it 0-0.

Raphinha then had a chance to score but again, Soyuncu blocked.

There was applause from the away end at the half-time whistle. For the first time in five games, Leeds had made it to the break without conceding. That was progress.

Looking at who could score themselves out of trouble in the Premier League’s relegation race, Leeds should be right up there. They have talented attackers and that includes Patrick Bamford and Gelhardt, both of whom were on their bench here. 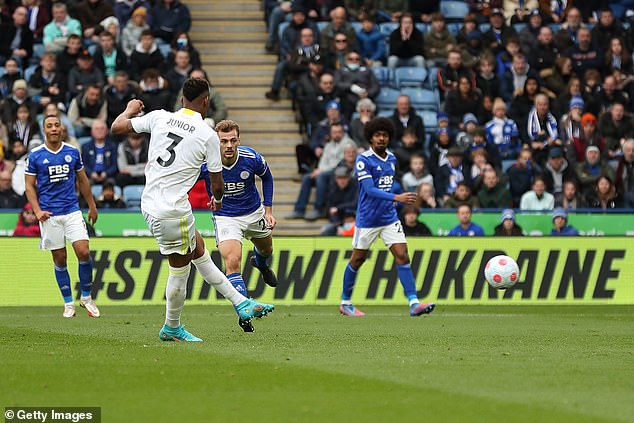 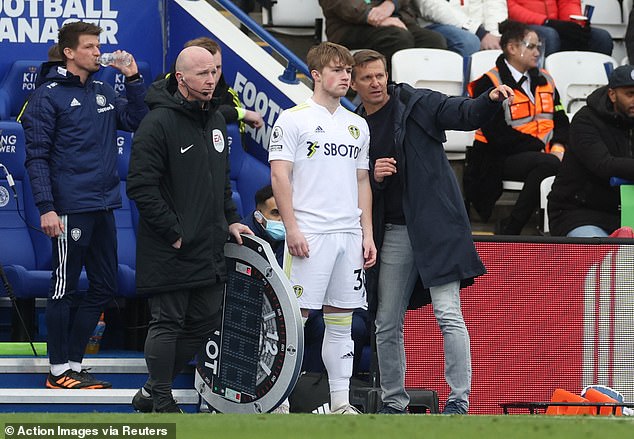 Marsch’s men continued to create chances. Harrison’s 20-yarder was deflected over, while Schmeichel was needed to deny Rodrigo from heading in at the near post.

The Leicester goalkeeper then stopped Raphinha from scoring from three yards. A glorious chance it was for Leeds to score the first goal of their new era.

Annoyed at what he was seeing – it was all Leeds, basically – Brendan Rodgers tweaked things by replacing Vardy and Hamza Choudhury with Kelechi Iheanacho and Ademola Lookman.

In response, Marsch introduced Gelhardt for Rodrigo. The 19-year-old might have opened the scoring with his first touch, too, but the ball’s spin sent it down the wrong side of the post.

Then came the sucker-punch for Marsch. After all of Leeds’ chances, it was Leicester who took the lead. Barnes created it. He played a one-two with Iheanacho then beat Illan Meslier, cool as you like and through the legs of Luke Ayling to find the far corner.

Leeds had managed 17 shots to Leicester’s four, but it was 1-0 to the hosts and that’s how it stayed. Defeat for Marsch on his first match day as manager.