Go behind the scenes with the stars who were together in Cleveland in ’97 for the NBA at 50 celebration.

And no matter what the NBA pulls off in its celebration of the league’s diamond anniversary this weekend, it can only tie – at best – the previous All-Star weekend held in this city back in February 1997.

The mood and ambitions were similar, but when the NBA pulled together its honorary 50 Greatest Players, the reality so far exceeded the idea that it was breathtaking.

Consider this scene at halftime of the 1997 All-Star Game at what then was known as Gund Arena: One by one, those legendary players strode to the court as their names were called, from Michael Jordan (who – along with several others that day – had played in the first half) all the way back through the mists of the NBA’s history. Each man took his spot on a broad, multi-tiered podium, Hall of Famers, All-NBA selections, No. 1 draft picks and truly household names standing shoulder-to-shoulder.

Forty-four, 45, 46. As the introductions wound down and fans in the building blinked in amazement, the great George Mikan – the NBA’s first marquee name, the Babe Ruth of the sport for his bespectacled work as the star of the Minneapolis Lakers ‘dynasty – walked gingerly from the tunnel to the court. Stepping up onto that top tier was going to be a challenge.

“Probably the most striking thing for me, I was sitting under the basket and looking to my right as they were coming out, calling their names,” said Jim Chones, the center turned longtime Cleveland Cavaliers broadcaster. “They called ‘George Mikan’ and I remember Bill Russell grabbing him up under his arm and helping Mikan. I was like, ‘Oh my God!’ I almost cried. “

Legendary centers (from left) Wilt Chamberlain, Bill Russell and George Mikan all were present for the NBA at 50 celebration in 1997.

Time frozen is now time past. So pay attention as the festivities unspool this weekend because 25 years from now they’ll all be memories, maybe a few of them equally poignant.

“It was unique. NBA history was coming alive. I was talking to someone the other day about the history of the league and how far it has come. “

Landing this weekend was no small get for Cleveland. It’s not as if the city holds a special place in the NBA’s history – heck, the current franchise didn’t join the league until another round of expansion in 1970. The Cleveland Rebels of 1946-47 went belly-up in one year in the old Basketball Association of America, the precursor to the NBA.

But Cavs owner Dan Gilbert’s initiative and the city’s ability to hold and throw the big party 25 years ago had the league calling Cleveland’s number again for this living, breathing Hall of Fame-like weekend.

David Gilbert of the city’s sports commission estimated recently that the event will bring an infusion of $ 100 million or more into the community.

“I’ve been in Cleveland forever, it seems like,” said Cavs TV analyst Austin Carr, the team’s All-Star point guard soon after its inception. “This really helps the community and the image of the city. When you have something like this, it helps you take the next step. “

Take a look back at what made each member of the NBA’s 75th Anniversary Team a superstar and legend.

Even in the dead of winter, with an ice storm descending on the city Thursday night, the tourism is expected to breathe life into downtown businesses still reeling from coronavirus restrictions. The media attention will remind the basketball world of the Cavaliers’ current post-LeBron James resurgence. And will give Cleveland a chance to shine for something besides Rock and Roll Hall of Fame enshrinements and the occasional big-time Cleveland Browns game.

“I think it’s more than big,” Chones said, “because we’re like the ugly duckling. We’re always trying to fight to show we’re just as good as any other big city. We’ve had our struggles because of the industrial change, and the poverty level is worse than the national average. So we’re struggling. But we’ve got a lot of hope. We have a new young mayor [Justin Bibb] and he’s ambitious, and he wants everybody to do well in the city.

“What this does, it brings light to all the positive things we have going in Cleveland. So this game becomes part of our positive identity and we’re looking forward to it. You and I both know, this is global. “

Global wasn’t anything the NBA or pro sports in America talked about much 41 years ago. That was the first time this event was staged here: the 1981 All-Star Game was held at the Coliseum in Richfield, the Cavaliers’ home from 1974-94 located about halfway between Cleveland and Akron.

The East won that day, 123-120, led by MVP Tiny Archibald’s catalyst performance (nine points, five rebounds, nine assists, three steals in 23 minutes) off the bench. Julius Erving, the top vote-getter in fan balloting (a mere 304,600), launched six 3-point shots in 29 minutes, at a time when teams were averaging only two 3FGAs per game. (The Doc missed all six.) 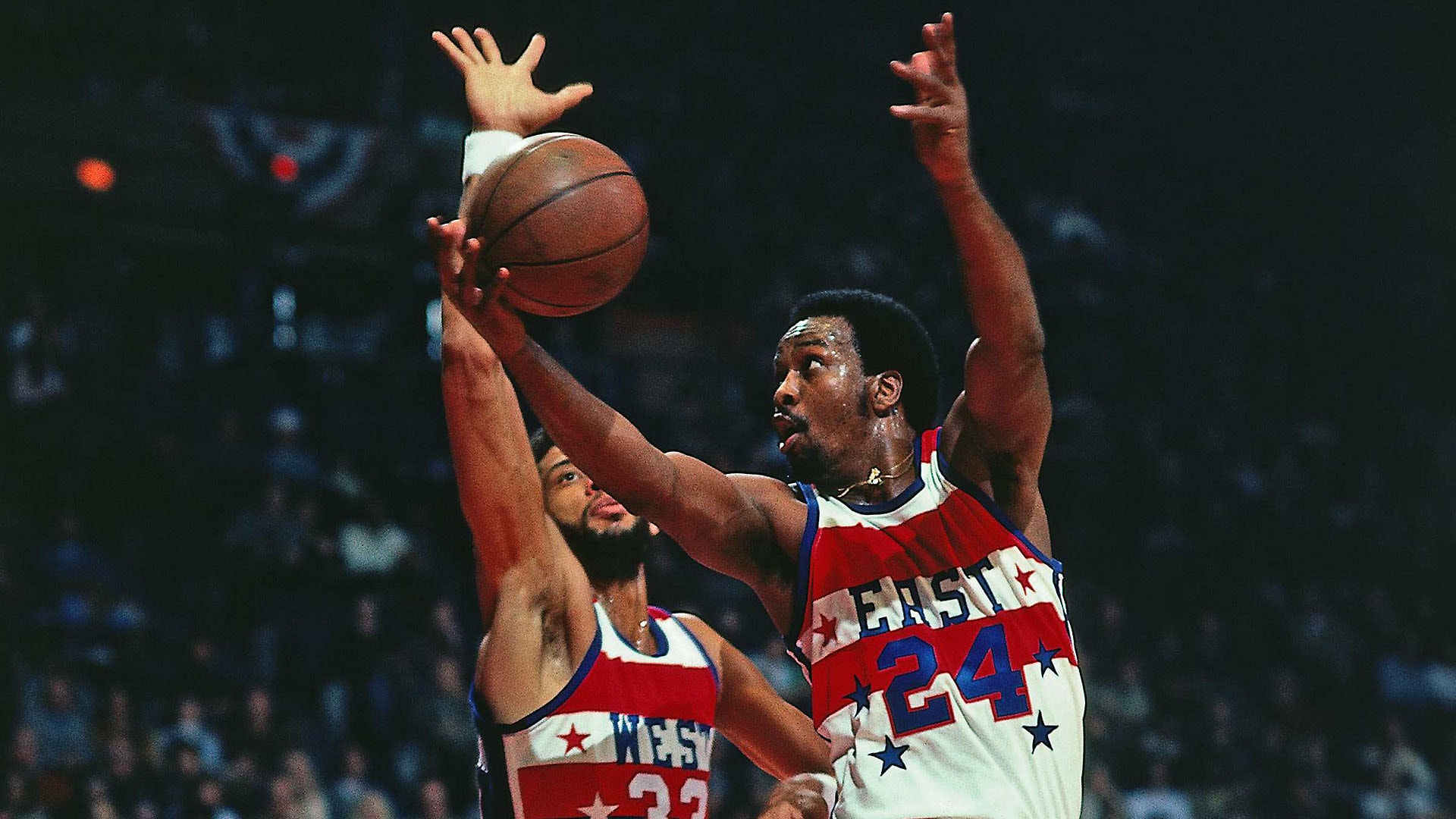 Moses Malone was 1 of 14 future Hall of Famers to play in the 1981 All-Star Game in Cleveland.

Wilt Chamberlain jokes with Kevin McHale and Dave Cowens at NBA at 50 team gathering in 1997.

Beyond the jaw-dropping marvelousness of the 1997 showcase, with Mikan there for the old guard and a rookie named Kobe Bryant showing up to win the dunk contest, there was this fascinating takeaway for many: The NBA was so very, very young.

Fifty years is a long time, yet here these giants of the game still were walking the Earth. In many cases, they still were vibrant, impressive specimens, and likely still would have been working if they’d gone into any other profession.

Those who normally inspired awe suddenly found themselves feeling it, to pinch-me levels. At the Friday afternoon “mixer” for the legendary players, Russell greeted Mikan by sharing with him, “You were my hero. I studied everything you did. ” Chamberlain, within ear shot, said, “‘Put me in that category, too.”

Said Chones, laughing as he recalled the Sunday game: “I sat next to Wilt. Of course he was so big and I’m so big [6-foot-11], there was a chair between us. I remember looking at him, I was in fear of him even as he sat there. And he hadn’t played in more than 25 years. “

Magic Johnson greets Karl Malone in 1997, who jokes around with he and Billy Cunningham about his play.

Eleven of the 50 Greatest were active players in 1997, including the five who played that day.

“It was unique. NBA history was coming alive, ”said Wayne Embry, a Hall of Fame player who became an executive with Milwaukee and worked as the Cavaliers’ GM, then president from 1986-99. He earned the NBA’s Executive of the Year award in 1992 and ’98.

“I was talking to someone the other day about the history of the league and how far it has come,” Embry said the other day. “To celebrate the 50th anniversary and have all those people come together, it was unbelievable. Now they’re doing it again. “

Another 25 years have taken their toll on the legends. Fifteen of the 76 individuals being honored this weekend have passed, 14 from among the original 50 Greatest. Bryant died in January 2020 in a helicopter crash in southern California. Eleven of the 76 still are active.

In this clip from 1997, Walt Frazier talks about making memories during the NBA at 50 celebration.

Bryant, who had been in high school nine months before, gave an early glimpse of his coming greatness by taking the dunk contest. In what then was known simply as the Rookie Game (now the Rising Stars game), the Lakers’ young star scored 31 points in 26 minutes. But his side di lui lost, so Allen Iverson – 19 points and nine assists – was named MVP. And got booed by the Kobe-wowed crowd.

Oh, and the coaches for that game: Red Auerbach and Red Holzman, two of the NBA’s biggest names and winners ever.

Steve Kerr, who had spent three seasons with the Cavaliers, won the 3-point contest. The actual All-Star Game was almost anti-climactic with all the star power around it. Charlotte’s Glen Rice earned the MVP trophy by scoring a game-high 26 points, 20 in the third quarter, in the East’s victory – and somehow overshadowing Jordan’s 14 points, 11 rebounds and 11 assists, the first All-Star triple-double.

Memories for years begin this weekend 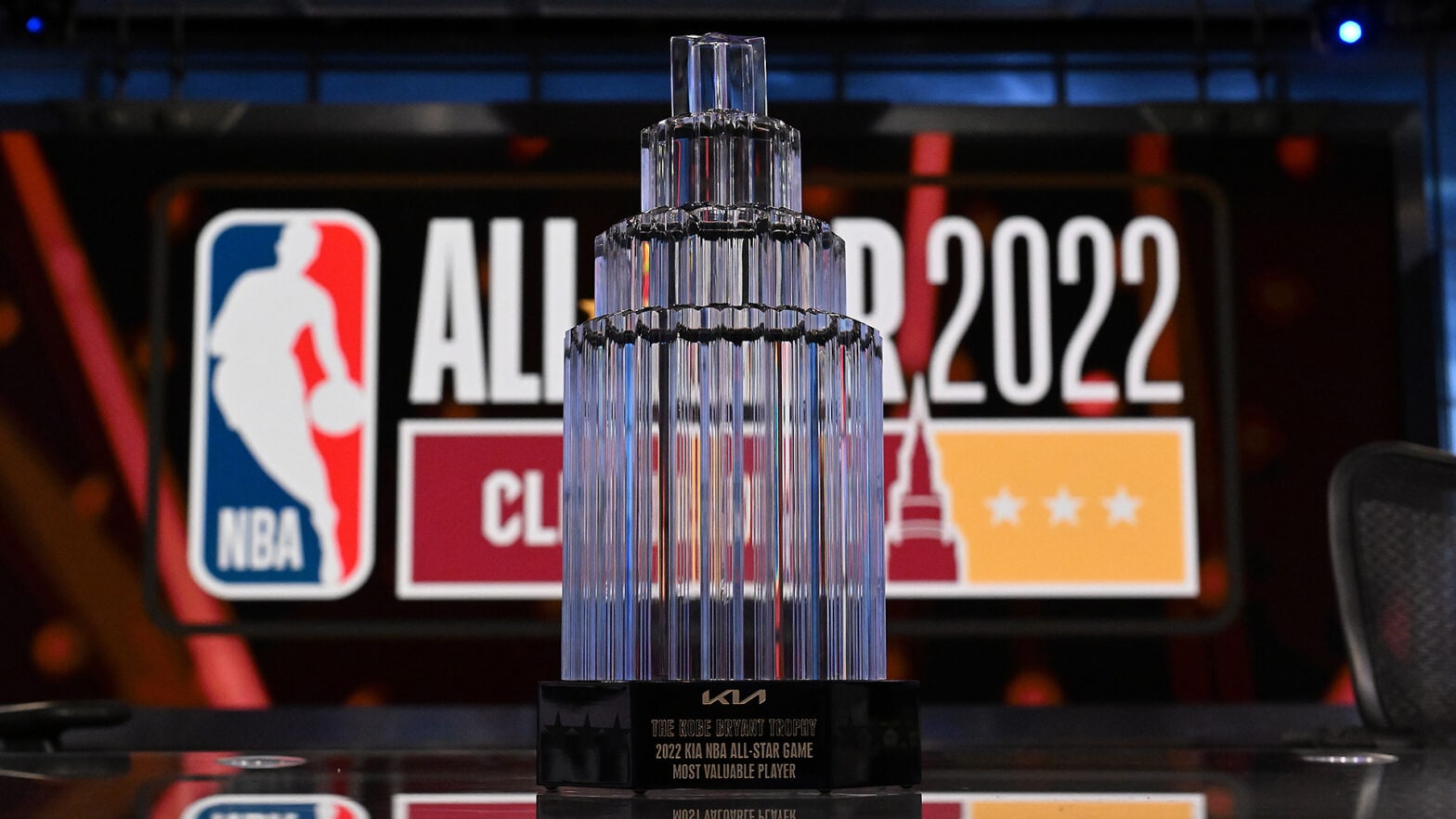 The 2022 All-Star Game will serve as the stage for a new, iconic moment in NBA history.

The host Cavaliers have sent 17 different players to the All-Star Game for a total of 41 selections. LeBron James was good for 10 of those in his two separate stays in Cleveland. Center Brad Daughtery played in five, and guards Mark Price and Kyrie Irving played in four each. James (twice) and Irving took home MVP trophies.

This year, Cavs guard Darius Garland became his team’s first All-Star since James and Kevin Love in 2018. His teammate Jarrett Allen was added as an injury replacement for Brooklyn’s James Harden. Evan Mobley and Isaac Okoro will participate in the Rising Stars and Skills events.

The schedule demands that today’s players and tomorrow’s stars take care of business. But if they’re savvy, they’ll pay attention to all that goes on around them this weekend, realizing either in the moment or years later how special it is.

“We’re not like football, where you’ve got 40 or 50 players [on a team], ”Chones said. “This is a pretty select group. I like to call it a culture.

“We all had different upbringings, we all learned to play together. We all sort of showed the world that people from different parts of the world and country, and different colors, can play together under one common cause and be successful. Y’know, all those basic principles that we grew up believing in have always been exemplified by basketball. “

Steve Aschburner has written about the NBA since 1980. You can e-mail him here, find his archive here and follow him on Twitter.