The England captain has found a new lease of life under the Italian after a quiet start to the season, scoring seven goals in his last 11 games in all competitions.

Conte has called the 28-year-old “world-class” but wants to take him to a new level.

“Surely when you have a player like Harry, you have to try to involve him in your tactical idea of ​​football,” Conte said.

“He’s an important player for us and he has to be a point of reference when we develop our football offensively.

“We’re trying to work with him in many aspects. I think every single player can improve until he decides to stop his career.

“We’re talking about a really good person who shows desire every day in training. He’s available for his team-mates and is always ready to speak about football, to improve and to see new tactical situations.

“I repeat: We’re talking about a world-class striker and I’m trying to help him to become also better and better. Me, my staff on the physical aspect are working – but not only with him, with all the team .

“To reduce the gap, it’s very important to improve every single player in many aspects.

“If this player is Kane we’re talking about a world-class striker, but it’s the same with (Dane) Scarlett. We have to improve every single player in this way to be more competitive as a team than before.”

Kane scored one goal in nine Premier League games under Nuno Espirito Santo and also took a month under Conte to start firing.

But the Italian was never in any doubt about his striker’s quality.

“Honestly I wasn’t worried before in the past when he didn’t score a lot,” Conte said.

“Because his performance was always very, very high, he played very well in every game for the team, he worked a lot for the team and is a fantastic player for me.

“He’s not selfish but now that he’s scoring I’m happy for him and the team. Because if he scores we have more probability to get three points or go to the next round in a trophy competition.

“As I said to you before, in the past his performances were very, very, very positive for me, despite him not scoring a lot in the past.

“We’re talking about a world-class striker. He’s able to score in every game. We’ve also to try to help him to score.” 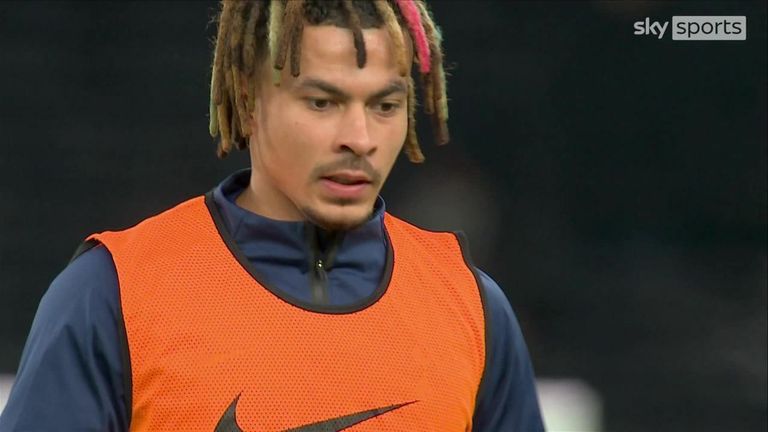 Tottenham head coach Antonio Conte said Dele Alli’s move to Everton was positive for all involved, but says the number of players that left the club in January suggests mistakes have previously been made

Kane will be hoping to continue his scoring streak against Southampton on Wednesday, but Spurs will be without Eric Dier, Oliver Skipp and Japhet Tanganga.

Dier is still out with a recurring thigh injury which troubled him before the recent winter break.

Conte said: “He had the same problems that he had in the past before playing the last game against Chelsea. He had a little muscular problem in his thigh.

“It’s not serious but the problem is in the same place as the last time, so for this reason the doctors told me to be patient and not to take risks with him.

“It’s a pity because you know the importance of this player to us.” “For this reason I try to push my medical department because we need Skipp to be available. We’re talking about a good and important player for Tottenham.”

Follow every Tottenham game in the Premier League this season with our live blogs on the Sky Sports website and app, and watch match highlights for free shortly after full-time.

Want the Tottenham latest? Bookmark our Tottenham news pagecheck out Tottenham’s fixtures and Tottenham’s latest resultswatch Tottenham goals and videokeep track of the Premier League table and see which Tottenham games are coming up live on Sky Sports.

Get all this and more – including notifications sent straight to your phone – by downloading the Sky Sports Scores app and setting Tottenham as your favorite team.