COURSE KUDOS—Jeff Lucatero, left, and Art Belmontes congratulate each other following a round of golf Sept. 5 at Rustic Canyon Golf Course in Moorpark. RICHARD GILLARD/Acorn Newspapers

When the pandemic arrived two years ago and shuttered the economy, many people turned to the outdoors in their desire to interact with others. As small gatherings defined by social distancing slowly gained acceptance, the migration outdoors grew and aligned itself perfectly with the game of golf. 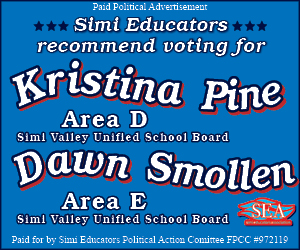 In 2020—especially during the second half of the year in the public’s fight to escape COVID—the popularity of golf experienced a rebirth and swung back to the glory days of Tiger Woods when the game neared its peak.

Over the past two years, a record 6.2 million beginners have taken up golf in America, statistics show. The Southern California Golf Association boasted a 25% increase in player participation, with members from more than 800 social clubs affiliated with the organization hitting the links regularly. It’s a number that includes several popular local groups. 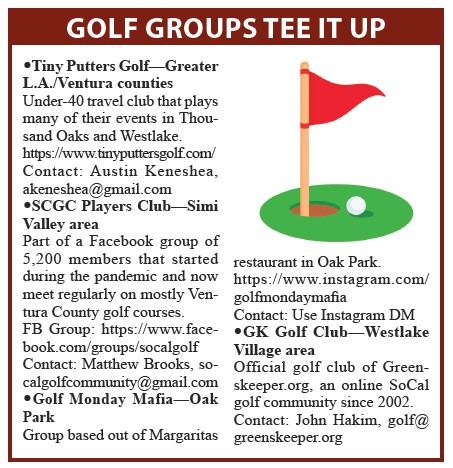 Across the region the golf clubs span multiple age groups, ethnicities and skill levels—and the shared theme of having fun in a relaxed outdoor environment.

Lorrie Mullick, a 30-year resident of Thousand Oaks, already had some talent playing the game but said she was looking for more.

“I like the concept of teamwork and camaraderie,” said Mullick, a retired educator.

She joined the Los Robles Greens Women’s Golf Club and became its vice president of membership in pursuit of a philosophy that says while there is the competitive aspect of the game that must be accounted for, golf should also be a fun sport, a game for life and an activity not limited by one’s level of talent.

“I think it is really important to know that women should not be inhibited by their skill level,” Mullick said.

“You feel comfortable coming out because there’s so much support, and you can play into your 80s and 90s. I encourage women to come out because they can start at any level, as long as they are willing to learn.”

Although she had more experience with the game than most—she started at age 8—Joni Omlor, a retired computer programmer, was looking to meet new people to share time with.

“I moved (to Moorpark) three years ago from Laguna Niguel. I was retired and my goal was to find a club. It’s been great. I’ve met women I feel will be friends for life,” Omlor said.

The Los Robles women’s group plays for chits redeemable at the golf course. No money prizes are given out.

Generally, the golf social clubs are divided into different levels of competition and stimulated by the occasional friendly wager as players compete on various courses throughout the area. The SCGA clubs also compete at the Tierra Rejada, Olivas Links, Simi Hills, Camarillo Springs and Westlake courses, among others.

Wherever they are playing, there are certain protocols players must follow.

“We play every Tuesday. While we’re there to have fun, we are part of the SCGA and follow their rules. We don’t do gimmes and that kind of thing,” said Omlor, as she talked about the scope of activities for her 39-member Los Robles women’s club.

“We have intra-club team play and also play matches against other clubs. We play for money weekly, and we have two major tournaments, the Presidents Cup and Club Championship. We go out and play different courses once a month, but we also do more than golf, like holding banquets and going out to lunch,” she said.

Going to lunch (and dinner) are popular attractions for the members of Golf Monday Mafia, the group run by Lucatero and his brother Jon.

“We play golf in a way that always includes the 19th hole,” Jon Lucatero said. “Our restaurant is how we’ve met all our members. My family started the Margaritas in 1998. Our Oak Park restaurant was opened in 2015, and Oak Park is part of a big golf community.”

“With my family restaurants in Oak Park and Valencia, it was tough because during the pandemic they kept shutting me down. Opening up, shutting down. And when they ended up shutting down the public putting greens, I built one here on our Oak Park restaurant patio with six holes to putt on,” said Jeff Lucatero.

Through it all, it was a combination of drinking margaritas, enjoying Mexican food and testing their skills at putting that united the club members. One of the first to belong was Art Belmontes, 72, retired from the Los Angeles County Sheriff’s Department and a fine golfer with a 10 handicap.

“When I first went into their restaurant years ago and I asked if they played golf, they said, ‘Yes, why don’t you come join us on Mondays?’ And we’ve been playing ever since,” said Belmontes, an Agoura Hills resident.

Jeff Lucatero, who played collegiate soccer at Cal State Fullerton where he earned his business degree, explained how he got into the sport.

“My knees were giving out and Jonnie got me into golf,” said the older sibling as he talked about how the club came about.

“It started with Mondays being my only day off,” Jeff Lucatero said. “So we had a motto: ‘extend your weekend.'”

And so Monday Mafia members began taking time off at the beginning of the work week and coming to play on a course that was far less crowded than on weekends—because every golfer knows how much more fun it is to play when they don’t have to wait to hit at every tee box.

Although his plate is full, the restaurant entrepreneur dreams of one day combining his two favorite activities.

“We play by the rules, we gamble a little bit and simply emphasize fun. All good. Now, if I ever had an opportunity to run a restaurant on a golf course, that’d be a hole-in-one, baby!”