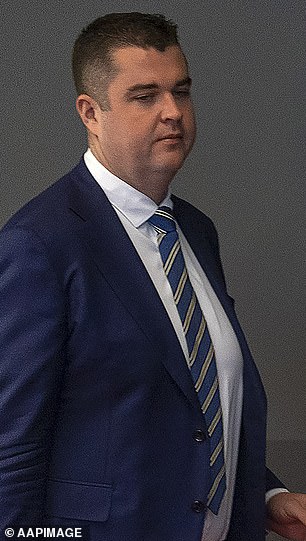 Former Cricket Australia chief Timothy Whittaker has been charged with two counts of sexual assault against male colleagues. He will plead not guilty

A former Cricket Australia chief attended Melbourne Magistrates Court on Thursday after being charged with two counts of sexual assault.

Timothy Whittaker, 37, was the organization’s long-serving head of communications and now faces jail time if convicted of the two separate charges.

According to the Herald Sun, the charges relate to an incident in 2016 involving a young male cricket worker, employed at Cricket Victoria, while the other allegedly occurred in 2019 against a young Cricket Australia employee.

Whittaker’s lawyer, Mark Sturges told the court the 37-year-old would contest both charges and plead not guilty.

The matter will return to the court for a seven-day hearing next May.

The 2019 incident is alleged to have taken place at Whittaker’s residence. The court heard that after inviting people back following a night out, the alleged victim fell asleep on Whittaker’s couch and ‘woke up to Whittaker feeling his penis and giving him a hand job’.

That incident was reported to the police and a second male came forward after charges were brought against Whittaker.

The court heard the 2016 incident also allegedly occurred at Whittaker’s residence when the alleged victim fell asleep and woke up ‘to the feeling of movement in his underpants and a hand stroking his penis’.

The second man spoke with Cricket Australia last month before providing a statement to the police.

Whittaker was not working in a position of authority above either alleged victim, and could face a prison sentence of up to 10 years if he is found guilty.

He was a senior official who traveled to Cape Town following the ‘sandpapergate’ ball-tampering scandal in 2018 and was also aware of the Integrity Unit investigation into former Australia captain Tim Paine.