If you meet enough Aussies in your life, you’ll eventually encounter one who will drink booze out of their own shoe. And if you know the Formula 1 star Daniel Ricciardo, you’ve already met an aficionado of what is dubbed the “shoey.”

The fun-loving Australian race car driver has punctuated his wins (of which he has eight in the top tier of the sport) by chugging the celebratory Champagne from his racing boot and getting others on the podium to join in with him.

Some might be surprised that a person so well versed in the dark arts of imbibing from a sweaty shoe would have a genuine appreciation for good wine, but Ricciardo does. So much so that the McLaren driver has partnered with Australian producer St. Hugo and its head winemaker Peter Munro to make his own Cabernet Sauvignon and Shiraz.

The collaboration, called DR3 after his F1 car number, debuted last year in Australia, quickly selling out. This year, the second edition has a 2018 Cabernet Sauvignon from the South Australian wine region of Coonawarra as well as a 2020 Shiraz blended from grapes across multiple growing regions Down Under. The latest duo of wines dropped in Australia earlier this year along with a $700 crystal decanter shaped like his racing boot—which sold out in just a week.

He’s kept some of that wine back though, with plans to sell it in America this fall. So, as Ricciardo takes the F1 summer break (races don’t resume until August 28), he’s traveled to the states to talk about the wine before the waiting list to purchase a bottle in the US opens on August 4. And though he calls his wine collaboration a healthy distraction from the grind of the racing calendar, there’s still no avoiding the sport’s “silly season.” With the scheduled time off from racing, people around the sport are filling the void with wild speculation on behind-the-scenes moves and what teams drivers will be on next year. And he’s once again found himself a topic of that gleeful parlor game among Formula 1’s fans and pundits, in the face of it he has recently reaffirmed his commitment to McLaren for 2023.

So we sat down with Ricciardo and St. Hugo’s Munro to talk wine, the growth of F1, the impact of Drive to Survive and life after racing.

How did you first connect with St. Hugo to kick off this wine partnership?

Daniel Ricciardo: I think it was 2020—or 2019—I got so confused because of Covid. It was at the track through F1 at Melbourne and we got connected—but I’d known St. Hugo pretty much my whole life—and then it all took off pretty quickly after that.

Why did you think a collaboration with St. Hugo was a fit for you?

DR: I got a lot of opportunities thrown my way, but this was something that not only I thought was fun, but I was passionate about it. To give you some background, I grew up around wine. I’ve got an Italian background so there was always wine at the table with family always eating dinner together—no TV at the table. Dad and [my grandfather] would do homemade wine, which would taste like vinegar, so it was always something I was involved with. Of course, not in the professional sense, but just like a bit of a way of life. Once we got talking, I was sold straight away. Being an Australian company and an Australian brand, that was the last tick of the box. 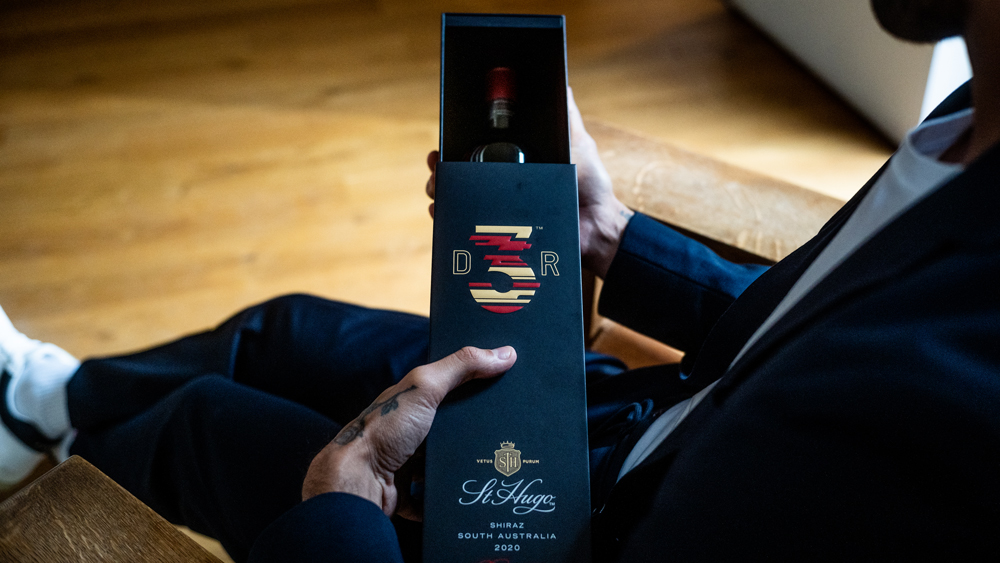 Shiraz is one of Ricciardo’s favorite varietals.

When you’re drinking wine, what do you lean toward—any favorites?

DR: I got a little bit of it from my dad, because he collects wine and has a cellar, so early on I learned from him. When in doubt, I’m a Shiraz and a Cab Sav. It’s very patriotic of me that I love an Australian Shiraz, that’s my favorite. I do love American Cabs, too.

With dad, as I said, he would try to make some homemade stuff and at times I was put off by wine because it tastes like his stuff [laughs]. He’s probably never going to read this so I can say it, his stuff was really bad. I’m the one now filling good bottles to his collection. I’m like, “Dad, drink the good stuff. You’re starting to get on so at least have the good stuff for the rest of your life [laughs].”

We’ve profiled CJ McCollum, an NBA star who also makes wine, and he discussed how there’s a real community in the league of wine lovers—have you found the same thing in F1 where you talk wine with some of the guys?

DR: A few days ago I gave Valtteri Bottas a bottle of the year one, I gave it to him after the driver’s meeting on Friday—he’s massively into wine and Australian wine, too—and asked him to let me know what he thought. I saw him on Saturday and he said “Oh, it’s really good.” And I was like, “You had it last night?!”

I’ve given a bottle to Pierre Gasly as well and to a few team team managers as well as other teams. So, yeah, there is a little bit of sharing wine together going on.

The Cabs are grown in Coonawara, how would you describe that growing region, Peter?

Peter Munro: It’s quite a cool region and the way I describe the Cabernet, for me, it’s quite a serious wine. So, when you’re with friends and the conversation starts into the meaningful, that’s where the Cabernet comes to the fore, whereas the Shiraz is a little more open and fruit forward.

You’ve described the DR3 Cab as a departure from the St. Hugo house style, how would you say it differs?

PM: It’s got more opulent fruit, really quite dark blackberry characters, whereas St. Hugo is probably a little more restrained and structural. It’s just letting the fruit come to the fore and be quite expressive.

When it comes to the Shiraz, how would you describe the regions you’re pulling from there to blend?

You’ve described the DR3 blend as a modern take on Australian Shiraz—how does it differ from tradition and what people have come to expect of Shiraz?

PM: It’s modern in that it’s probably a little more fruit-forward. Daniel is very much about having this powerful, ripe, generous fruit and so that generosity comes through in the wines. Therefore, I’d describe that as a little more modern style as opposed to being a little bit more tannic and structured. 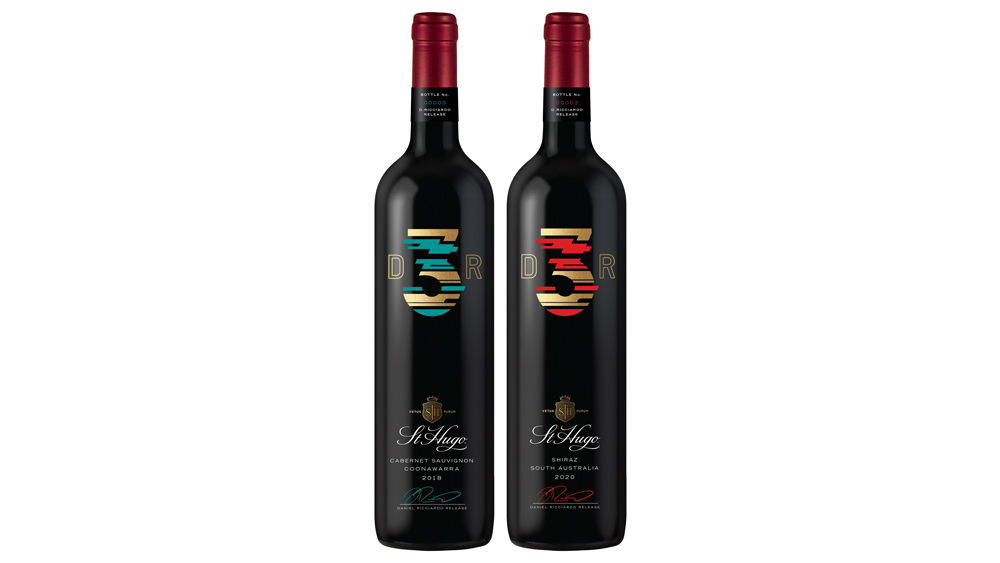 Both bottles will go on sale in the US this fall.

You mentioned what Daniel likes, how do you two work together to create the wines—and how was the first year different than the second?

DR: So this year one was quite restricted with Covid and travel and not being able to be on the ground. And I was also trying to educate myself through Pete and figure out what I like and what I’m able to taste and describe. And then year two, that’s when we really got into blending together and that was the proper tutorial. We started going back and forth trying to get the blends and mixing a ton together.

Were you able to relate it to your day job?

DR: I feel like there’s a lot of ways I can relate to the process in terms of there’s a lot of technical stuff that is the same as Formula 1, like when we’re going back and forth with the engineers trying to fine tune the car so it’s more comfortable for me. Some of the terminology is quite similar, and we’ll go back and forth with Pete and myself. It’s all just small details, and that’s what’s really fun when you’re trying to chase that perfect taste, whatever that perfect taste is for you.

PM: And Daniel is actually very good when we’re going through all the blend components and being able to pick what each component brings to that blend. That’s the interesting thing about blending: Nothing is perfect, but you got to pull a lot of different things together to make the perfect one. I’ve been very impressed with his palate and his ability to communicate that.

Danny, have you drunk this out of your shoe yet?

DR: Funny thing, you’re not the first person to ask me this.

Your reputation precedes you.

DR: I feel it’s too good to do that. But when we got into year two, you sit in the table and come up with all these ideas and that was one, we got to get you doing a shoey with this. And lo and behold, we’ve ended up doing a shoey decanter, which we were like, “I don’t know are we pushing it too far?” Then the bloody thing sold out in seven days and I was like what the hell? So, there’s an appetite for shoes and wine, I believe [laughs]. 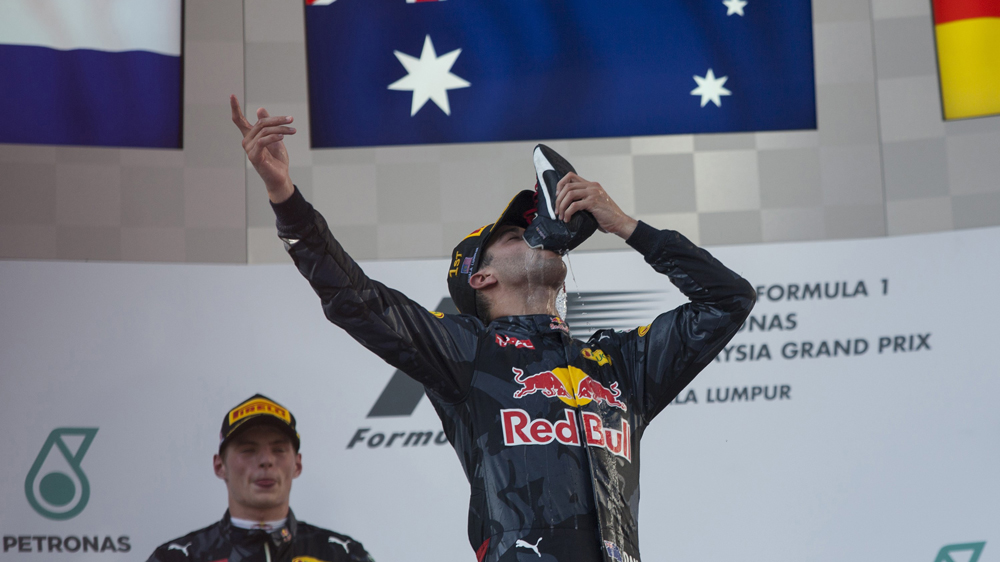 Ricciardo has made the shoey a podium tradition.

I’m sure the company [Ferrari Trento] that sponsors the sparkling wine you guys spray on the F1 podium will be glad to hear your wine is too good to drink out of a shoe, but theirs is suited to it.

Will you make more of the decanters?

DR: We’re not sure yet. Would there be a demand? I would say so considering how they flew off the shelf, but they were meant to be something collectible, so we’ll see. It’s something we’ll discuss, but there’s no concrete plan.

You mentioned earlier you get a lot of opportunities coming your way, and I’m curious what the effect of Drive to Survive has been on that for you. I came to the sport through watching the Netflix show, and it popped up around halfway through your F1 career, so have you been able to tell the difference since the show debuted?

DR: It’s changed it drastically. There’s always been certain places around the world where we race and they’ve had an F1 fanbase—you go to some places and you’ll have a sea of ​​fans outside of your hotel, and now that’s every race. There are no more quiet races. I spent quite a bit of time in the States and the States used to be the quiet place, and now there are so many more F1 fans here. It’s pretty nuts what that show has done for the sport.

DR: You know it was always a sport where it was very private and closed doors. And I think it’s a very cool sport, that’s the reason I got into it. I loved it and I just don’t think it had visibility. Now that it has got visibility people are like “Oh shit, yeah, this is actually cool.” You just had to put it in front of people and they were naturally going to be drawn to it.

When I’ve spoken to athletes about projects like starting a wine, they’ve said they’re thinking about setting up their post-career while they play. Do you see this wine as something to lead you into after racing and what do you want to do in your life after F1?

DR: I just turned 33, so with maturity and a little bit of wisdom you do start thinking about how this is not going to last forever and at some point there will be life after F1. I gave it a bit of thought, but for now if I’m having fun and enjoying the opportunity and learning from it. I’ll continue to do it and if it grows into something that I can continue after F1, awesome. But with the F1 schedule and everything that goes on, it’s really good to have a healthy distraction and other hobbies so that I can switch off from racing. So, is this something I enjoy a lot and could I see myself continuing for a long time? I’d like to think so.