It’s not the Serengeti, it’s a field in Cambridgeshire: Photo taken by a drone shows a pack of Konik horses, which date back to Neolithic times, huddling for water amid dry conditions

By The Mail on Sunday Reporter

At first glance, it might look like a watering hole in the Serengeti National Park in Tanzania, with wildebeests, hippos and zebras.

But this photo was taken last week by a drone at Wicken Fen, in Cambridgeshire, one of Europe’s most important wetlands.

As with so much of the country, prolonged dry weather has had a severe impact – drying up waterways, lakes and ponds. 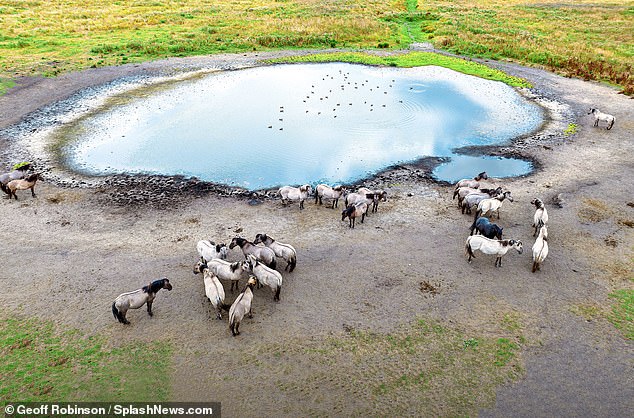 Watering hole: A herd of Konik horses gather around Wicken Fen, in Cambridgeshire, one of Europe’s most important wetlands, which has been impacted by the UK’s prolonged heatwave

The Konik horses in the picture are a rare breed descended from wild forest horses hunted to extinction in Britain in Neolithic times.

Reintroduced to Wicken Fen by the National Trust, they are known for being hardy, but even they are finding the conditions a challenge.