The event will be held from March 9-11, 2023 at the Elkhart Health & Aquatics Center in Elkhart, Indiana for the second-straight season.

The NIC returned in 2022 after the COVID-19 pandemic canceled the 2021 meet and interrupted the 2020 meet mid-way through the competition. The event has been positioned as a secondary championship event primarily (though not exclusively) for swimmers who did not qualify for the NCAA Championship meets.

A core group of teams has attended the meet throughout its existence (like Rice, Florida International). Last year saw a general increase in the prestige of athletes competing. That included Ohio State and Tennessee, both top 10 NCAA programs, bringing rosters of top non-NCAA Championship qualifying athletes. Other Power 5 teams to make an appearance included Indiana, TCU, West Virginia, and Virginia Tech, with most of the country’s top mid-major teams attending as well.

While many of those teams had competed at the meet before, especially the Indiana men who won the meet in 2019, the depth of the teams from Tennessee and Ohio State elevated the competition.

The Tennessee men and Ohio State won the 2022 titles.

In total, 30 men’s programs and 51 women’s programs competed last year. Those are similar numbers to the 28 and 52, respectively, that competed in 2019.

Individuals and relays may qualify for the CSCAA National Invitational Championship by winning their respective event(s) at a bona-fide collegiate conference championship. In addition, any individual or relay team who equals or surpasses the CSCAA ‘A’ standard during the qualifying period shall be eligible to compete at the Championship.

Swimmers who qualify for the meet automatically (individually or on a relay, via conference championship or time standard) may also enter individual events if they have achieved the CSCAA ‘B’ standard during the qualifying period. 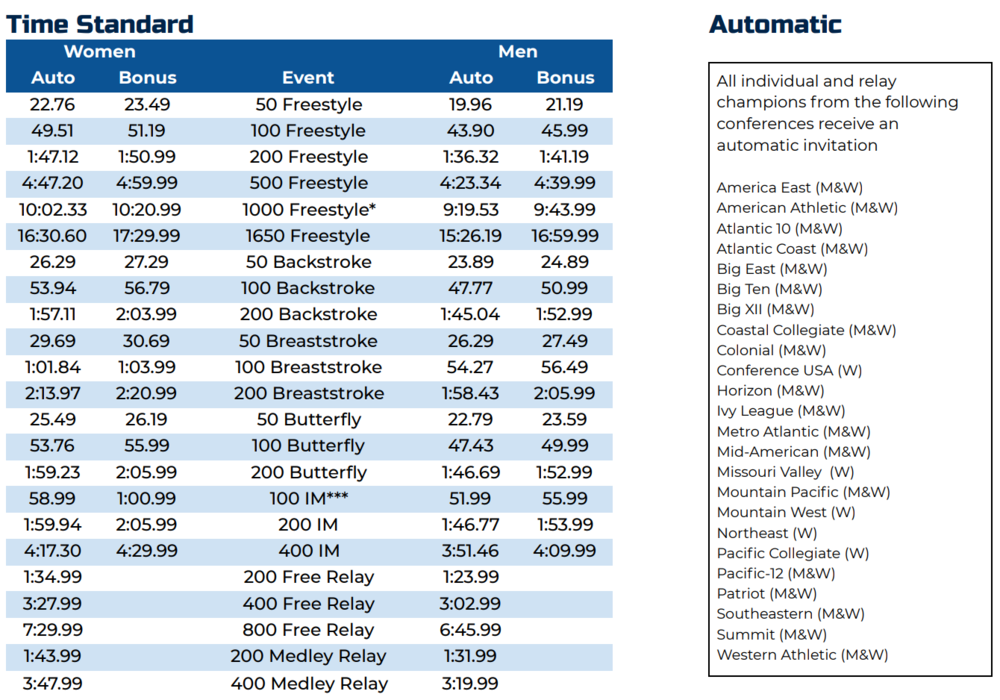