“If the team concedes five goals, what more can you expect me to do? I’m not a superhero.”

Cedric Soares is looking back at the lowest point of Arsenal’s season. Back in August, the Portuguese full-back played the whole game as the 10-man Gunners were humbled 5-0 by Manchester City – to leave them bottom of the table without a goal in their first three matches.

“Everything went wrong in that game,” he reveals to Sky Sports. “We started the game with an idea, we conceded very early, we had a red card and it’s City away, one of the best teams in the Premier League.

“Football is not always straight forward. Sometimes it takes time, you have a bad day and we as players are human in the end.”

Yet with Mikel Arteta’s side at their lowest point, that afternoon in the Etihad Stadium dressing room sparked the revival that sees Arsenal chasing a Champions League spot.

“All the players decided to have a conversation straight after the game,” Cedric recalls. “We had an honest chat between us. This is also part of the process.

“Maybe it [the Man City game] helped us not to do the same mistakes. Maybe it helped the kids to be in a moment where it’s tough to receive the ball and try to show up. Maybe you can try to bring everyone together. So it is part of our growth and we have learned from it. “

Cedric recently celebrated his two-year anniversary since joining Arsenal and an awful lot has changed in that time. Arteta has moved on the experienced personnel in the team in favor of a younger roster. At 30, Cedric is now the second-oldest player on the Gunners’ books, behind captain Alexandre Lacazette.

Arsenal are also one of only three Premier League sides – along with Norwich and Southampton – to put out a squad with an average age of under 25 this season this season. The difference is that the Canaries and the Saints have done it only once each this term. The Gunners? 18 times – out of a possible 28.

“It’s true that it’s a completely different team,” Cedric claims when asked if this is a new Arsenal. “We have changed a lot, but the team understands the ideas of the coach much better. Everyone around the club is fighting for the same thing, we are improving these margins as well in training.

“All the moments are more fluent, especially with the ball. This makes the process quicker and you’re then closer to scoring and winning. Everyone knows what he has to do, every moment is important. Set pieces are important, defending is important . We have to be working on everything. “

Set pieces and defending have been two of Arsenal’s key characteristics regarding the team’s improvement this season. From a dead ball perspective, where Cedric is one of the free-kick and corner takers, the Gunners are the only team left in the Premier League yet to concede from a set piece this term, while only Liverpool and Manchester City have scored more than Arsenal from those scenarios.

And the Gunners’ sturdy backline, which the Portuguese international has been a part of in recent weeks, has helped the north Londoners to recent clean sheet victories at Aston Villa and Wolves. Arsenal were well beaten in both those matches last season.

But throughout many parts of this campaign, Cedric has watched on from the sidelines. That dismal match at Manchester City back in August was his last Premier League start for six months, mainly due to the arrival of right-back rival Takehiro Tomiyasu on Transfer Deadline Day. So how did Arteta keep the Portuguese full-back on board?

“He’s obviously a human, sometimes he tries to have a close relationship with the players,” says Cedric. “But we are adults here, he doesn’t actually need to justify to us whether we need to play or not.

“He tries to have everyone on the same page. In training he also pays attention to the players who don’t play. Sometimes you don’t think so, but he does pay attention. It’s important you keep your level in these moments.

“When he decides to use you, because he’s the boss, you have to give him your best performance and everyone should be thinking this.

“Last year, I also started the season not playing and then when I played, we had the same chat. It’s like this: you have to be ready when the opportunity comes. If the opportunity is not there, you can’t just put up your finger and ask to play. This is what I did last season, when I came in I played well. “

Play well he has, in recent weeks. Arsenal have won six of the seven league matches in which Cedric has filled in for Tomiyasu since the latter’s injury. But a deeper look at the statistics shows a lot more than just some reliable stand-in cameo displays.

In terms of Premier League right-backs, only Kieran Trippier and Trent Alexander-Arnold have completed more crosses for 90 minutes than Cedric this season. Meanwhile, the 30-year-old’s recent Arsenal run has shown him to be more effective at passing effectively and dispossessing opponents than Tomiyasu.

So, with Tomiyasu “close” to returning to Arsenal action, according to Arteta in his press conference on Thursday, who does the Gunners boss pick? The in-form player in Cedric or the first-choice option he replaced?

“This is a question for Mikel,” Cedric says with a smile. “I will do my job and Tomi will as well. He was fit in the last one or two weeks but the coach kept me on the team. So it’s his call di lui in the end.

“I’m not afraid of competition. If you look at my career, you can see the number of big names I had in front of me and sometimes I turned it around and sometimes I didn’t.

“Now at Arsenal we have two or three options in every position. Normally, the team benefits from it. If you have two players fighting for one position, the level of improvement becomes higher for both. It’s as simple as that. 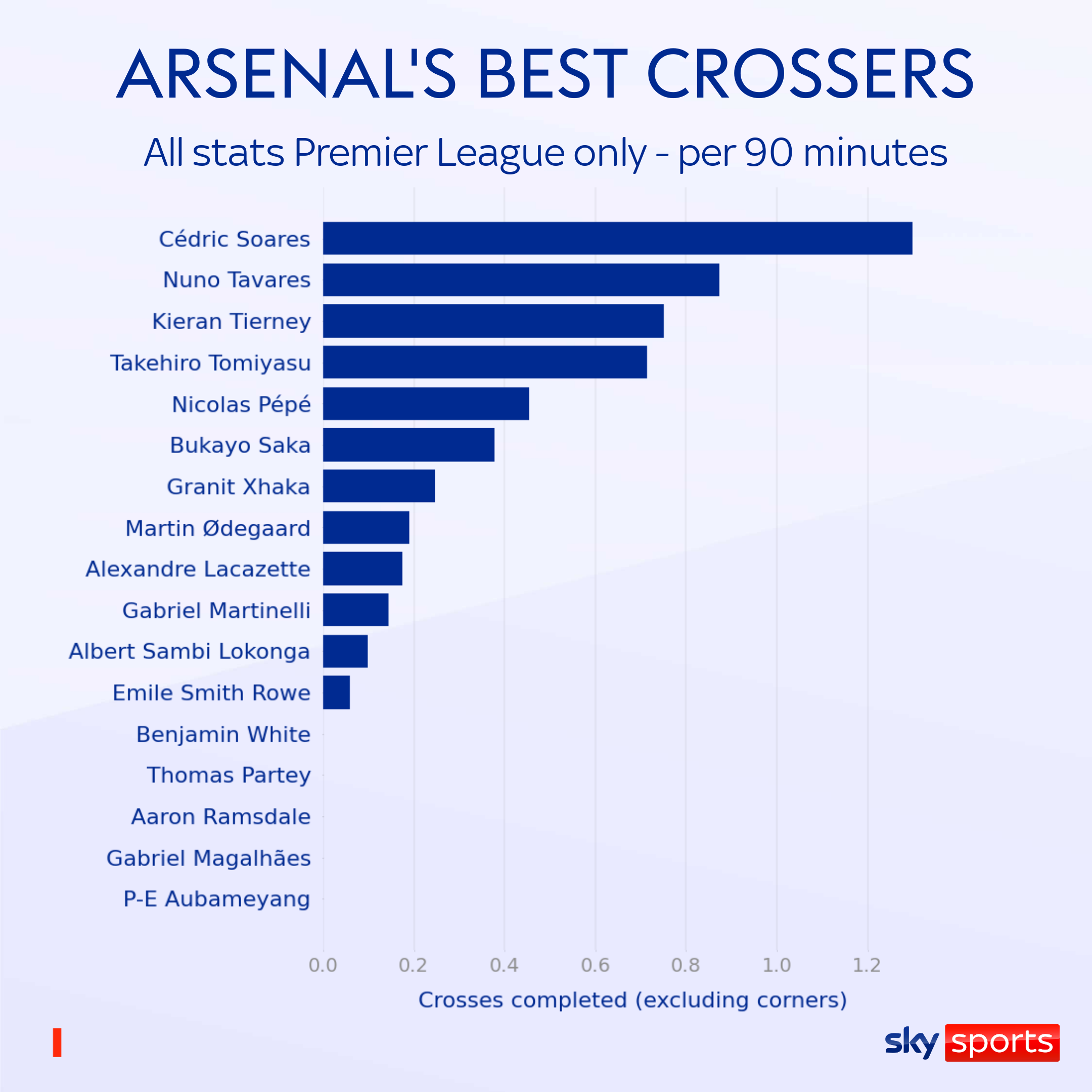 “Me and Tomi are good friends. We try to help each other on the pitch. Before the game, I sometimes help him when I’m not playing. Sometimes he helps me.

“When he came, of course I knew he was going to have these opportunities [to start] – that’s why he came in the first place! What’s important is that me and Tomiyasu have a natural, positive relationship and we both want to help the team in every moment.

“He’s a fantastic guy, he’s young, so he has also a lot of room to keep improving. I’m there to help him and that’s what I’m trying.”

Cedric is a rare player in this Arsenal side over the age of 30. With the club captaincy still up in the air following Pierre-Emerick Aubameyang’s sacking and departure, does the Portuguese defender see himself as one of the experienced leaders?

“There’s a few in the dressing room,” Cedric reveals. “Laca has been a great leader, Granit is a natural leader. I think I do it in a natural way. When I feel that I need to talk, I talk.

“I’m always concerned about a lot of different things in the team. I pay attention to a lot of details as to what each player needs.

One of the younger players Cedric has the most experience of working directly with is Bukayo Saka, given the two have been regulars on the Arsenal right-hand side in recent weeks.

The Portuguese full-back has reveled in watching the likes of Bernardo Silva, Cristiano Ronaldo and Sadio Mane in training – and that feel-good sensation on first viewing was there with Saka came through.

“He’s a fantastic talent,” says Cedric of Saka. “When I started to train with Bukayo, and it’s not just him at Arsenal, but I started to get something.

“He has been amazing and I think he’ll have a brilliant future and he’s a fantastic kid. I’m very proud of him but he just needs to keep going. There is no limit, but it’s important he keeps going the same way and I’m sure he will have a brilliant career. “

The mix of experienced players like Cedric and the youthful exuberance of Saka and others have helped put Arsenal in a commanding position in the race for the top-four. That horror show at Manchester City seems a lifetime ago.

The Gunners lead fifth-placed Tottenham by three points, with the luxury of a game in hand over their Champions League qualification rivals as well. But despite being the favorites for fourth, there seems to be little fear about handling the expectation now thrust upon them.

“There is always pressure,” says Cedric when asked about Monday’s trip to Crystal Palace, live on Sky Sportss. “There isn’t a game without pressure, but that’s a positive as well. I think there is more excitement as well, it makes you more ready. This is part of your job.

“But there is no extra pressure and we have to be facing it exactly like this – to be happy where we are.

“But we want to achieve more and more, we have to keep looking up.”