The 2023 Factory colors for the pair of BMW M Hybrid V8 cars set to grace a full season of the IMSA Weathertech Sportscar Championship’s new GTP class were presented for the first time at a launch event at the Petersen Museum in Los Angeles on Thursday evening.

The first prototype developed by BMW M Motorsport in 25 years will sport an avant-garde livery based around the iconic BMW M colors.

Franciscus van Meel said: “We are proud that, parallel to the 50th birthday of BMW M, we are returning to the big motorsport stage with the BMW M Hybrid V8. We are delighted that this adventure begins in North America, the most important international market for BMW M GmbH. After all, the BMW M Hybrid V8 is more than just a race car, it is paving the way for an electric future for BMW M, by emphatically demonstrating how dynamic and emotive electrified M Power can be.”

Andreas Roos: “Being back in the top class of motorsport and battling for overall victories at such legendary races as Daytona, Sebring and Road Atlanta in 2023 is both a major challenge and huge motivation for everyone at BMW M Motorsport. We have worked very hard in recent months to get the BMW M Hybrid V8 ready for racing in a short time. Thank you to all our partners at Dallara, BMW M Team RLL, our development team RMG, and BMW Group Designworks for the fantastic support with assembling, developing and testing the car. And thank you to our sponsoring partners as well. Without their support it wouldn’t be possible to run such a project. The BMW M Hybrid V8 is a beautiful race car. It is now our job to make it fast. We are working towards achieving this goal day by day, and are confident that we will be ready in January when we really get down to business for the first time at Daytona.” 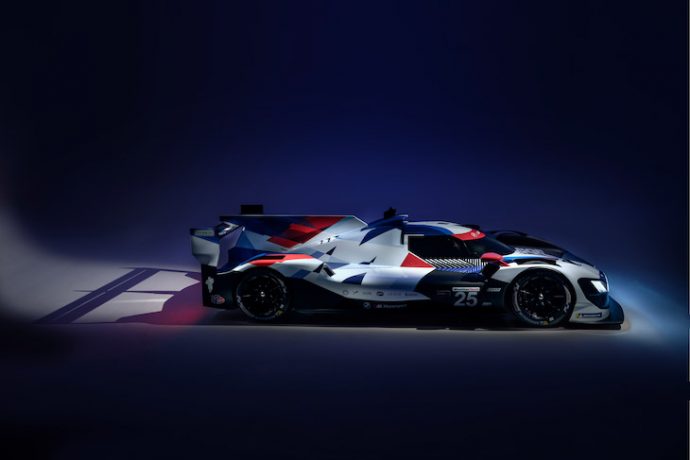 BMW M Team RLL Principal Bobby Rahal said: “There is no doubt that we understand and appreciate the level of commitment and dedication it will take on the part of RLL to be successful in this new venture. BMW M Motorsport is providing us with a great car, great engine and great driver line-up, of which we are very pleased. We understand the scope of the challenge in front of us and look forward to meeting it head on. As has been the case before, the level of collaboration and teamwork has been tremendous. Being in at the ground floor certainly gives our personnel good insight into the car from the beginning. I’ve learned long ago that you temper your expectations. Yes, you have hopes and you know you will be ultimately successful, but, as with any new car program there are unforeseen circumstances that can work in your favor or work against you. For RLL, it’s a matter of being prepared for either.”

The BMW M Hybrid V8 began its extensive testing schedule in the USA earlier this week with a test at Sebring International Raceway (USA). The test car will also be on display at the upcoming Petit Le Mans weekend.

Following on from the camouflage livery which the BMW M Hybrid V8 is utilizing while testing, the design for the racing season also comes from BMW Group Designworks under the program leadership of Michael Scully.

The 2023 works livery differs from the heritage-based ‘Icons of IMSA’ camouflage with a “future-facing coat of arms of modern, bold, fractal blocks of comprised of the iconic M colors and the M logo.”

“These elements have been deconstructed to form what at first might appear to be an abstract triangular pattern across the BMW M Hybrid V8, but when viewed from the side, the M logo clicks right into place. – M reconstructed, if you will,” Scully explained. 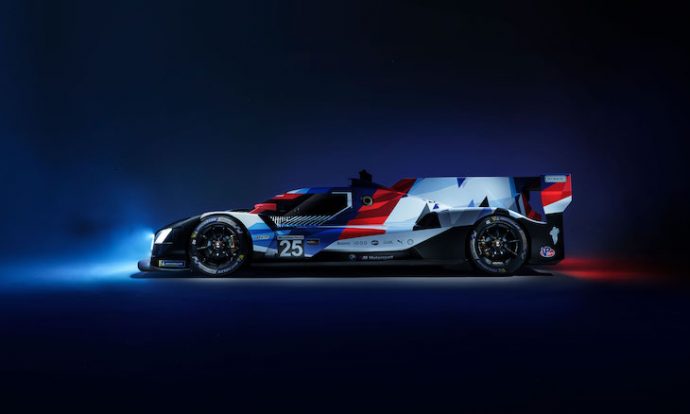 The design also features ‘Mbedded’ references to the BMW logo, and uses both blue and purple elements to pronounce the natural colors of electricity. 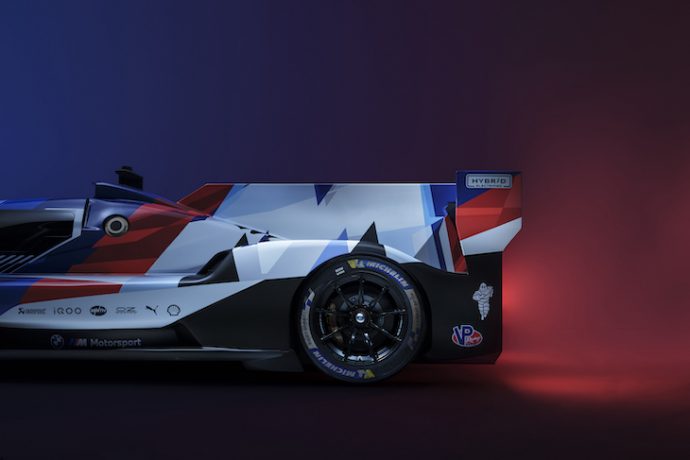 Additionally the works livery carries BMW M Motorsport’s now-signature matte black extension ahead of the cockpit beneath the driver’s side of the windscreen, thereby extending BMW’s interior design hallmark of driver orientation to the exterior of the car for enhanced driver focus. In fact on the race-ready cars this non-reflective matt element will be the only black foil on the car, as all other black areas shown at the launch will remain in their native carbon fiber finish. “This measure allows us to reduce weight by 25 to 30 percent compared to a conventional livery for race cars. Less is more,” said Scully.

The debut of the BMW M Hybrid V8’s works livery also gives the first chance to see the car’s surfaces in non-camouflaged guise and to identify aspects of the design, which may have been previously obscured.

The layout of the laser-lit kidneys coincides with the open, flow-through architecture of a modern prototype race car, and the air which passes beneath and through them is fundamental to the aerodynamic performance of the car; both in terms of cooling, but also for efficiency of downforce. The front of the car invokes the faceted hood, nested BMW logo, and inverted ‘Y’ configuration between the kidneys of the BMW M Vision Next, and is a great example of BMW’s showcases informing not only the production cars, but also the race cars . 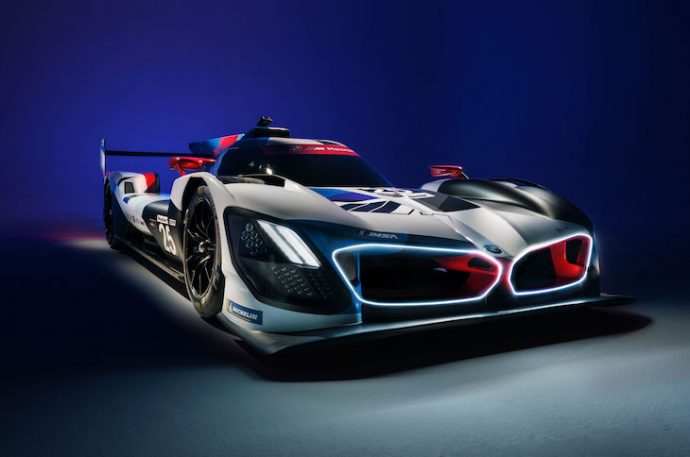 The kidneys’ lighting uses an exciting new technology. Innovative Swiss company LESS SA has developed a new approach as an alternative to LED lighting where light is generated by a nano-active optical fiber trigged by a laser. This provides ultra-bright and ultra-uniform light within a very small form factor such that it significantly saves weight and energy when embedded onto a car. This technology was also presented as a future vision for the first time in the BMW M Vision Next in 2019. “ 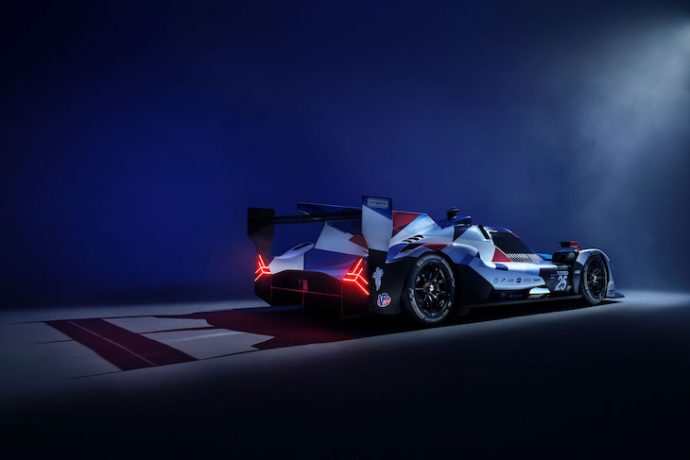 Transitioning around the side of the car, other BMW icons become apparent: the forward-leaning shark nose, the boomerang-shaped guide vane just behind the front wheel arch that summons the BMW M4’s air breather feature, the M mirrors and a modern interpretation of the Hofmeister kink. The sidepod carries a defined diagonal feature line which punctuates the radiused surface above it and at the same time also helps define the requisite front diffuser airflow exit. “A great example of the interdependence between BMW design DNA and dedicated efficiency which makes racing projects like this so engaging,” said Scully.