Injuries have limited Damian Lillard (right) and Bradley Beal in the 2021-22 season.

Damian Lillard and Bradley Beal are currently out of the lineup and out of uniform, dealing with injuries and no doubt pondering their futures while their teams struggle without them and teeter on the edge of the Play-In Tournament.

And speaking of being on the fence, where do the Blazers and Wizards stand exactly with their franchise players?

Several years ago, Lillard and Beal were establishing themselves as stars. Five seasons ago, they were the faces and centerpieces of their clubs. Last season, Beal (31.3 points per game) and Lillard (28.8 ppg) were in the top 3 in scoring and were both still capable of taking over games, were popular with fans and were fixtures in their communities.

But what about now, and more importantly, next year and beyond?

In that sense, the Blazers and Wizards share the same issue. They each have a tremendously talented guard who is still in their prime… yet neither impacts the game defensively or has shown they can make their team a championship contender. That’s important to note because Portland and Washington are currently resetting rosters that might take years to develop into a consistent winner. Meanwhile, both players, whose best years might be behind them, are due massive contract extensions. 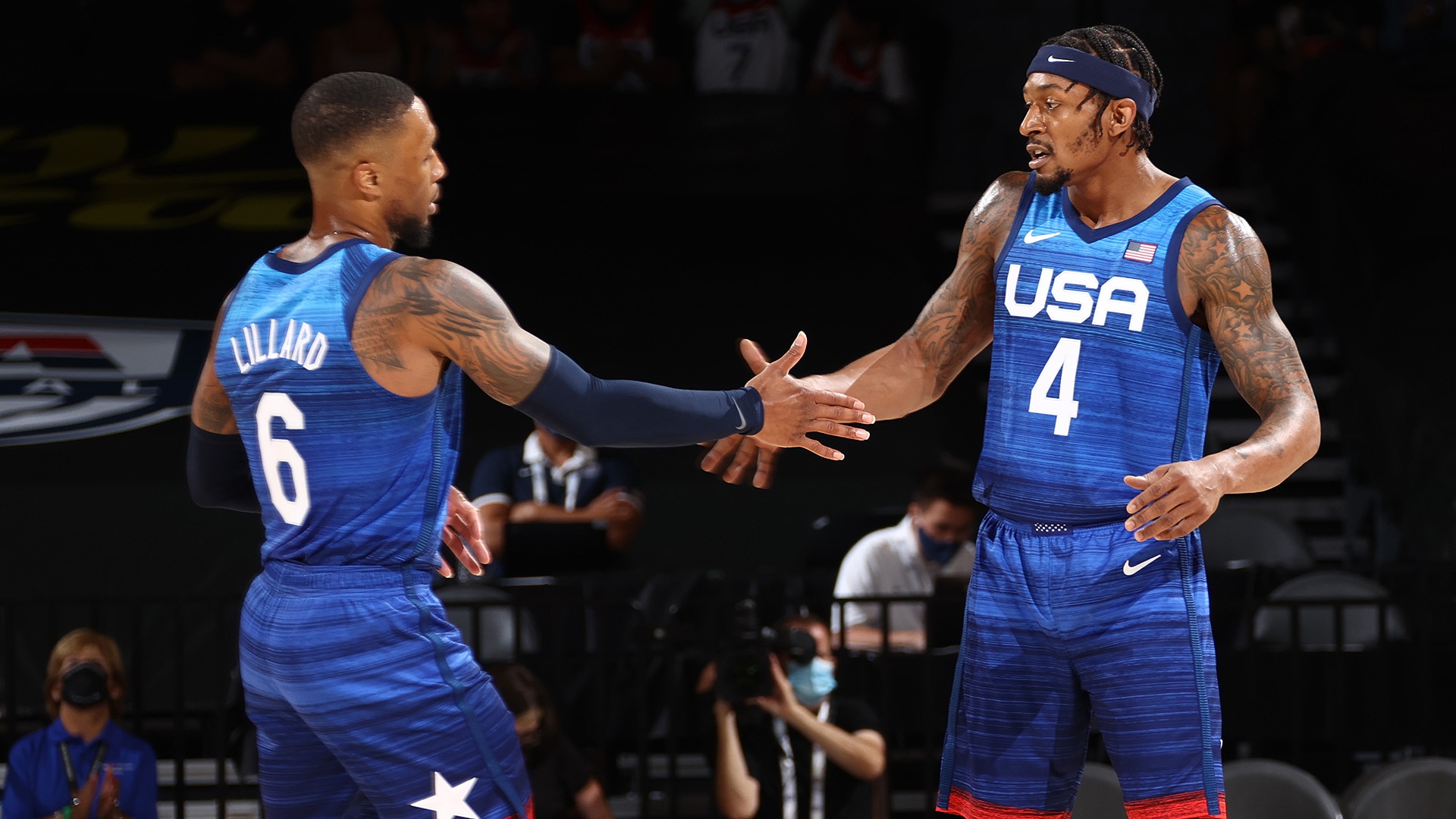 Bradley Beal (right) and Damian Lillard have enjoyed vast success in the NBA and beyond.

Both teams resisted the urge to deal their stars at the trade deadline, and there are strong enough indications that trading was never really an option. There’s always the chance one or both are moved this summer, but again, that speculation isn’t coming from the front offices of Portland or Washington.

Instead, the Blazers are all but ready to hand Lillard an extension that could approach $ 50 million a season, and Beal is staring at an extension to stay with the Wizards that will be hefty as well.

These are delicate situations if only because nobody knows for sure if a continued relationship is the right move for the team or players. It’s really a dice roll for both sides, with no guarantees.

Would the Blazers, for example, be better off trading Lillard and using the return to launch a healthier rebuilding process – adhering to the old Branch Rickey rule that it’s better to trade a year too early than a year too late? Likewise, should the Wizards execute a sign-and-trade with Beal, who can become a free agent this summer, and use those assets to begin a new era?

Here’s the situation for both players / teams and what might lie ahead.

Lillard and the Blazers

Damian Lillard said that he plans to be out until he is fully healthy.

Perhaps more than any players in franchise history other than Clyde Drexler and Bill Walton, Lillard is Mr. Blazer. He’s an inspiring story, a player from tiny Weber State who made the Blazers a very good team and turned himself into an outstanding scorer with a knack for big shots launched from big range.

Lillard is a six-time All-Star and, if you ask him, among the most unappreciated talents of the last decade. Along with Stephen Curry, he made shots taken from the logo look effortless. But it would be unfair to label him strictly as a 3-point maestro. Lillard brings a strong handle and also attacks the rim. His consistent scoring of lui put him on the NBA’s 75th Anniversary Team, and his clutch moments of lui are numerous.

Those are clearly his strengths. Then there are the milder aspects of his game of him. He’s a good passer but not always a willing one – his career average of 6.6 assists per game is rather average for a star point guard – and he doesn’t rebound. Also, he’s a smallish guard with major defensive limitations, and those historically don’t win many titles unless they possess a legendary skill, much like Curry, or serve as their team’s second-best player.

The Blazers made only one trip to the conference finals (in 2019) with Lillard. He’s now 31 and didn’t play to his level di lui back then when Golden State swept Portland out of that series (and did so without an injured Kevin Durant).

The lack of deep runs in the postseason aren’t all Lillard’s fault. The Blazers never gave him a teammate his equal or better, especially after LaMarcus Aldridge bailed in free agency and went to the San Antonio Spurs. When the Blazers shipped out CJ McCollum last month, it was the sign the small backcourt had finally run its course – probably a year too late.

Lillard gave cryptic responses last summer about his willingness to remain with the Blazers, but once the team dumped GM Neil Olshey earlier this season, Lillard suddenly had a change of heart. Or at least he extended his patience of him. Perhaps inspired by Giannis Antetokounmpo refusing to flee to a big market and winning a championship in Milwaukee in the 2020-21 season, Lillard still holds hope that he, too, can have that euphoric moment in Portland.

“For me, my heart is (as a) Portland Trail Blazer,” he said recently. “I want to win it. I know that I have a plan that’s going to put me on my best level when I come back to play. And I want our team to fit that. “

Part of that loyalty is tied to money, too, and Lillard stands to make a bundle more in Portland than anywhere else. That said, he’s already made multiple fortunes. Until he sees the vision put forth by interim GM Joe Cronin, Lillard says he’ll reserve judgment.

But what are the Blazers’ realistic options here? They seem set on grooming Anfernee Simons as McCollum’s replacement, but can Simons make a better difference while riding shotgun? Also, Portland isn’t exactly a free-agent destination, and besides, next summer won’t offer many A-listers, anyway. Barring a blockbuster trade – and the Blazers aren’t flush with assets to deal – Portland probably won’t appear much stronger next season.

Beal and the Wizards

Bradley Beal opted to have season-ending surgery in early February.

The real deal? If he isn’t, he’s close enough, at least offensively. Beal is a certified bucket-getter who is comfortable from multiple spots and distances on the floor. He contended for three NBA scoring titles and averaged 30.5 ppg or more from 2019-20 to 2020-21.

It’s true that his light is greener than any of the other Wizards, which helps his scoring average. But Beal is also consistent and efficient, especially given his volume of shots by him.

It wasn’t too long ago when Beal and John Wall were in the conversation for the most talented backcourt in the league. Then Wall got hurt, never really recovered and was then shipped out. The Wizards bankrolled Beal and never regretted it as his production di lui rose along with his three All-Star appearances di lui.

But during that time, Washington went nowhere special, in the standings or postseason. Much like Lillard, Beal isn’t capable of carrying a team for deep playoff runs as the main star – and to be fair, only about a dozen or so NBA players bring that level of pull. Other than scoring, he lacks a special, game-changing gift.

And now, the player and team are at their first crossroad. Beal can opt for free agency this summer and, by doing that, he’ll sacrifice a ton of money. As with Lillard, Beal’s loyalty is tied to his wallet than him. Beal is eligible to sign a five-year, $ 246 million deal with the Wizards if he declines his player option of $ 36.4 million for 2022-23. That should take care of his great-great-grandchildren di lui.

Which is why Beal recently responded “it’s fair” when asked if he’s leaning toward staying.

Another option is a sign-and-trade, but the Wizards would need to be on board with the return, and Beal with the destination. If there’s a contender willing to supply a decent amount of assets, this can happen, and if you ask some Wizards fans, maybe needs to happen.

Does Beal want to stay in Washington and possibly bypass a chance to win with more immediacy elsewhere?

Can Kristaps Porzingis give Bradley Beal and the Wizards a legitimate No. 2 option?

He’s only 28, so there’s time… at least until July when everyone needs to make a decision, one with long-range implications. At the moment, Beal and GM Tommy Sheppard and owner Ted Leonsis seem aligned, and all signs point to Beal being back next season.

Which means either the Wizards haven’t yet been swayed enough by trade offers, or they’re too emotionally tied to Beal and believe he’s part of the solution instead of the problem.

It should all make for interesting chatter and developments four months from now. In the meantime, Lillard and Beal have plenty of time to contemplate.

Neither player is going anywhere fast, and unless something changes in what’s left of this season, neither are the Blazers and Wizards.

Shaun Powell has covered the NBA for more than 25 years. You can e-mail him here, find his archive of him here and follow him on Twitter.