Columbus North has dominated the local girls tennis scene in the recent past, having won seven consecutive sectional and five straight regional championships.

The Bull Dogs again figure to be a solid favorite to defend those titles and make it back to the state tournament after going 20-3 and falling to Evansville Memorial 3-2 in last year’s semistate.

Here is a look the Bull Dogs and the other area girls tennis teams heading into the 2022 season:

The Bull Dogs return one of the top 1-2 punches in the state with senior Ashlie Wilson and sophomore Kathryn Wilson at No. 1 and No. 2 singles.

“If I keep them both at No. 1 and 2 singles, we’re going in for the most part knowing we’re going to be up 2-0 and looking for that third spot,” North coach Kendal Hammel said.

That third victory sometimes proved to be a little bit of a challenge for the Bull Dogs last season. Senior Tiffany Fu returns at No. 1 doubles and could team with freshman Aya Saad or freshman Annable Sun, with the one that doesn’t play there ending up at No. 3 singles.

Senior Sydney Cooper and Leah George return at No. 2 doubles, but are battling for those spots with juniors Siri Poludasu, who played some No. 3 singles last season, and Zoe Bishop.

The only thing that has been able to slow down the Bull Dogs this season has been the weather.

The Olympians will try to take a few steps forward after going 3-15 last season.

“Although they were somewhat inexperienced last year, they’re better this year,” East coach Matt Malinsky said. “There are still a lot of people on the team who haven’t been playing for years and years. It’s hard to make up for the lack of repetitions. “ 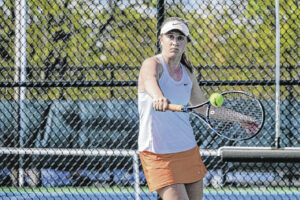 Betsy Hoene and Ashlyn Waddle also played a little varsity last season. Malinsky said he has eight-to-10 other girls who are battling for spots in the lineup.

“We’ll probably try a bunch of different types of combinations to see which one gives us a better chance on a given day,” Malinsky said. “It’s extremely open competition for all those other girls who are looking to prove themselves.”

The Jets will be a young team with several varsity newcomers after going 8-8 last year. 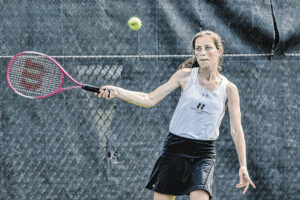 Hauser’s Bella Kilps hits a return shot during a sectional tennis No. 2 singles match against Edinburgh at Columbus North High School in Columbus, Ind., Wednesday, May 19, 2021.

Sophomore Bella Kilps will make the jump from No. 2 singles to No. 1 singles. Sophomores Lydia Jordan and Addyson Barriger will step in at No. 2 and No. 3 singles.

Senior Gabby Johns and junior Charlie Clark move up from No. 2 doubles to No. 1 doubles. Sophomores Mattie Foster, Gracie Blair and Abby Blair are battling for the two No. 2 doubles spots.

“I am excited for the upcoming season,” Hauser coach Molly Crabtree said. “While we lost a few of our contributing varsity players from the 2021 season, we have a great group of girls that put in a lot of hard work in preparation for this spring season. I cannot wait to see them in action. “

Coach Deron Brown has two daughters in senior Reagan Brown and sophomore Tatum Brown back at No. 1 and No. 2 singles, and their cousin, sophomore Lucy Brown, likely will step in at No. 3 singles.

The Panthers went 14-9 last season. Sixteen of the 21 girls on this year’s team are new, and 17 are freshmen or sophomores.

“No. 1, 2 and 3 (singles), we should be pretty solid, ”Deron Brown said. “All three of them are better than they were last year, so that’s a good sign. It’s just a matter of who we can find to fill the doubles spots. Hopefully, we’ll be better at the end of the year that at the front. “

The Lancers pulled out a pair of wins in the sectional last year to advance to the final before falling to North to finish the season 7-11.

“We’re expecting a lot of effort, energy and confidence on the court,” Edinburgh coach Rachel O’Brien said. “Our strength as a team is all the confidence we have, and how well the girls work together no matter their level. I think we’re capable of being at the top of our conference. “

The Eagles will look to improve on a 7-10 season that ended with a loss to North in the sectional semifinals.

Sophomores Anna Stogsdill and Anna Tipton could move up to No. 1 and No. 2 singles after playing No. 2 and No. 3 singles last season. Senior Mattie Satter, who played No. 2 doubles, could be at No. 3 singles.

Junior Katie Tipton likely will remain at No. 1 doubles, and team with senior Abie Bowman, who played some No. 2 doubles. Also battling for doubles spots are senior Mary Rygiel, sophomores Julia Burt and Cady Kemp and seniors Annika Evenson and Kylie Workman.

“We have a strong group of returning players,” Brown County coach Thom Miller said. “We’re pretty excited. I’m really happy with where we are, based on where we were last year. “

The Cougars are hoping for another winning season after going 9-8 last year.

Senior Sarah Lemming returns at No. 1 singles, and sophomore Kiley Zabel is back at No. 1 doubles. Sophomore Drew Hubbard, who played No. 3 singles, could move up to No. 2 singles.

Freshman Carson Bowling, sophomore Natalee Martinez and senior Gabby Bleier, a move-in from California, likely will fill three of the other four varsity spots. Batting for the remaining spot are junior Kennedy Royalty and senior Ella Christopher, who is playing for the first time since her freshman year.

“We’re pretty excited,” Trinity coach Julie Lemming said. “We have several fresh faces. Some of these girls have never picked up a racket before, but we’re hopeful. They’re quick learners and have picked up the rules and the scoring system pretty quickly, so we’ll see. “

April 9; at Floyd Central Invitational; 9 am

April 16; at Jeffersonville Invitational; 9 am

May 2; vs. Lands Haute South (at Bloomington North); 6 pm

April 9; at Brown County Invitational; 9 am