“We can now confirm Eddie Howe will not be joining the club for reasons outwith both his and Celtic’s control.”

It was a newsflash that triggered a collective outburst of laughter from Rangers fans already basking in glory after their team won by a 25-point chasm to crush Celtic’s bid for a historic 10th successive league title.

While the dust was settling on Howe’s change of heart, Celtic’s hierarchy cast their attention over 5,000 miles away to Japan. There was a brief pause in the chuckling in Govan as people asked: ‘Ange Postecog-who?’.

“This has got to be a wind-up,” former Scotland striker and lifelong Celtic fan Alan Brazil said on his talkSPORT show. “Where do they come up with these guys?”

That view, which has since been laughed off by Postecoglou, was driven by ignorance, but it was an opinion initially shared by many, including some among a disillusioned Celtic fanbase.

“I laugh sometimes when I look back,” says Celtic midfielder Tom Rogic, who also played under Postecoglou for Australia. “Although I knew him quite well, there was a perception of: ‘Who’s this guy?’.

“People have found out pretty quickly he’s good at what he does. There’s a reason the club brought him here. I know it’s easy to say that now, but once you’ve experienced it, he’s a top manager.”

In under a year, Postecoglou has silenced doubters by revitalising a club in turmoil, winning the Premiership title and League Cup during his debut season.

Here, BBC Scotland documents the 56-year-old’s life in football, a career founded on the sacrifice of his immigrant parents and littered with success across three continents.

‘They sacrificed their life for me’

The hurdles Postecoglou has overcome in the past few months pale in comparison to the challenges his family faced to give him the “dream” life he has today.

Born in Nea Filadelfeia, an Athens suburb, young Postecoglou emigrated to Australia at the age of five after the 1967 Greek military coup resulted in the loss of his father’s business.

Half a century on, the Celtic boss still struggles to comprehend the sacrifices made by his parents, Jim and Voula, who took the 30-day boat trip from Greece without a job or home awaiting them.

“I understand what sacrifice is about, I understand what being in a privileged position like I am now is about. I’m not going to take this for granted because I know how hard my mum and dad worked.

“They sacrificed their whole life for me to be here. I don’t feel like I’m working every day, I feel like I’m living a dream that was founded by other people’s sacrifice.”

Postecoglou acknowledges his relationship with his father, who died in 2018, was far from perfect. He recalls his dad di lui working an endless cycle, leaving before the Melbourne sunrise before returning home to collapse on the couch.

But every Sunday brought a chance to wind down as Jim would swap his relentless work life for a day on the terraces. It was there young Ange would see his real father di lei-and where his love affair di lei with football began.

“I made a quick connection that football’s something that makes him happy,” he says. “So, if I love this like he does, it will get me close to him.

“My childhood was sitting next to him at three o’clock in the morning, watching football from this side of the world. He would always point out the entertainers and the teams that were scoring goals.

“That got into my subconscious. When I became a manager, that’s the kind of teams I wanted to produce.”

The ‘significant influence’ of Puskas

An initial passion for Australian rules football was knocked down Postecoglou’s list of priorities after spending Sundays in the stands with his father.

He joined South Melbourne – a club formed by Greek immigrants – as a nine-year-old, starting an affiliation spanning over two decades as a player and manager.

Postecoglou would spend 10 years working his way up the ranks before becoming an established first-team full-back, winning two National Soccer League Championship titles in 1984 and 1991, the latter as captain.

“Ange was one of the great players who starred in that team,” former team-mate Kimon Taliadoros tells BBC Scotland. “Ange absolutely worshiped the club, he lived it.

“He was an overlapping, attacking left-back, more consistent with the modern game. He had extraordinary pace, aggression and a beautiful left foot. He always had such high expectations regardless of who he played with.

“In training, we would play small-sided games. Even in those, the result mattered. His demands were to win.”

The name of Ferenc Puskas would often come up when father Jim was educating his son on the game’s entertainers. What neither knew back then was the Real Madrid icon would go on to manage Postecoglou years later at South Melbourne.

Postecoglou, who would drive Puskas to and from training, enjoyed a close relationship with the three-times European Cup winner. He cites the Hungarian, who led the club to the 1991 NSL title, as “one of the most significant influences” in his career by lui.

“At training sessions, Ange would take a leadership role,” Taliadoros says. “That developed more under Puskas. He set expectations for the group and he would make sure the tempo was at the right level.

“Puskas played with a 4-3-3 – remember this was in the 1980s. He insisted on having the wingers high and wide and he expected the full-backs to attack, reminiscent of the way Ange’s teams play.”

From ‘unemployable’ to transformational

After a nine-year playing career, Postecoglou repeated his feat by managing South Melbourne to two NSL Championships in 1998 and 1999, cementing his legendary status by becoming the only figure to be involved in all four title-winning teams.

His success alerted the national set-up, where he spent seven years coaching Australia’s Under-17 and Under-20 teams.

But his spell ended in disappointment after failing to guide his side to the 2007 Under-20 World Cup, resulting in a heated on-air debate with former Australia international Craig Foster, who questioned Postecoglou’s coaching credentials.

Postecoglou said recently he felt the interview made him “unemployable”, with short stints at third-tier Greek club Panachaiki and Whittlesea Zebras bookending a period of running coaching clinics across Melbourne.

After a challenging period, his next move to Brisbane Roar in the rebranded A-League would prove to be career defining.

Doubts were raised over the appointment as not only did the incoming manager have glaring on-field issues to resolve but the club were in disarray off the pitch.

Postecoglou oversaw a huge rebuild in his first season before guiding the side to back-to-back A-League crowns, the first titles in the club’s history, while playing a brand of football that transformed the perception of the sport across the nation.

“When the A-League was created in 2005, there was a view that Australian football wasn’t where it needed to be, so they looked overseas for coaches.

“Roar were in crisis. Not only did Ange drive the on-field outcomes but he had a significant influence on the strategy and approach off the pitch. I attribute that to his intellect and his knowledge. He’s always been a student of the game. “

Taliadoros recalls that, as well as being “highly intelligent” and “extremely analytical” as a manager, his former team-mate was “the master” of “hilarious wit” and “cutting sarcasm”.

On the training pitch, however, time for joking is parked at the dressing-room door. “Hectic,” is how Australia midfielder Jackson Irvine described Postecoglou’s coaching style on Open Goal. “But, oh my God, he was top notch.”

And former Australia defender Ryan McGowan tells BBC Scotland: “It’s his way or the highway. There’s no in-between. Unless you buy into it, you’ll be out the door.”

After a move to Melbourne City in 2012, Postecoglou saw out half of a three-year contract before the lure of becoming national team manager was too good to turn down. 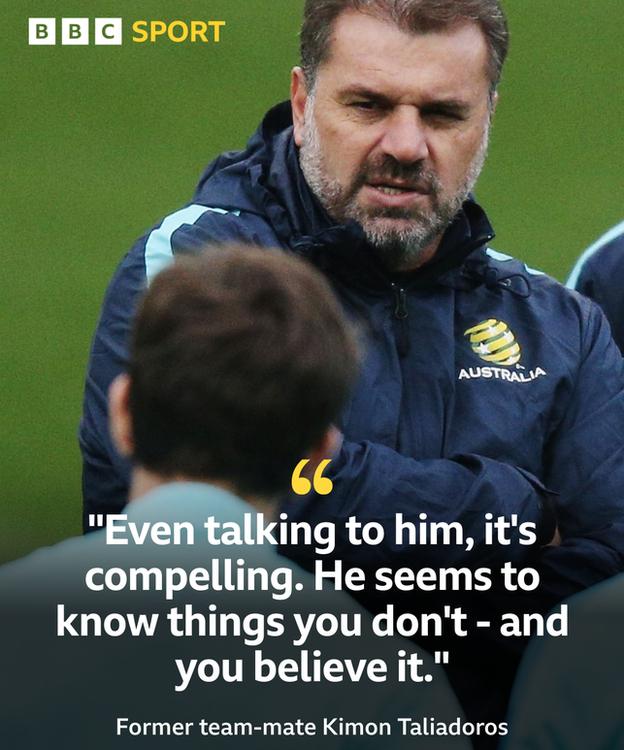 The Celtic boss – who was ridiculed and chased out Australia’s youth set-up six years prior – rejuvenated the nation despite an early exit from the 2014 World Cup, where the Socceroos were drawn alongside holders Spain, the Netherlands and Chile.

“He reminded Australian football that we can be world class,” Taliadoros says. “With Ange at the helm, we felt anything was possible. Man for man, we were disadvantaged, but he made us believe we could beat any team.”

The spirit Postecoglou instilled drove the team on to win their first Asian Cup in 2015. Qualification for the 2018 World Cup followed, but the nation was rocked by the news of his resignation just two weeks later.

“He’s definitely not a yes man,” McGowan adds. “He wasn’t happy with some decisions taken above him, so he walked away.”

After a month out of management, Postecoglou swapped Oceania for Asia and J-League club Yokohama F Marinos in late 2017.

In a testing first season, Marinos still reached the J-League Cup final despite finishing in the bottom half of the top flight.

Postecoglou was then linked with a return to international management with Greece, but he committed his future to Yokohama, a decision that paid off for both parties as he led the team to their first J-League title in 15 years.

An underwhelming mid-table finish in the 2020 followed before Celtic made their move halfway through the 2021 season.

A sense of skepticism may have lingered in Glasgow, but delirium was the feeling on the opposite side of the globe as Postecoglou became the first Australian to manage in Europe.

“It was surreal,” Taliadoros says. “Even almost a year on, the sense of disbelief, but also immense pride, reflects the mood of a nation.

“These things don’t happen to Australian coaches. We’ve had great players, but never a manager. Right from the outset, we saw a lot of negativity, but we knew what he was capable of.”

That pessimism took its time in dispersing. While the Australian’s imprint on the pitch was almost instant, a high turnover of players, plus failure to reach the Champions League group stage, left question marks.

Form was stuttering domestically, too, with three losses in Celtic’s first six Premiership games consigning the club to their worst league start in 23 years.

But the last of those three defeats, at Livingston in September, would prove a turning point as Celtic racked up a relentless 30-game unbeaten run to displace Rangers at the summit.

With the League Cup secured in December, Postecoglou’s side blitzed their way to an insurmountable advantage, earning a sixth top-flight crown across three continents for the Greek-born manager.

With a double secured in the 56-year-old’s debut season, plus Champions League group-stage football to come next term, this might be only the beginning.

“I’m 35, but I’m like a young kid coming into training every day,” Celtic goalkeeper Joe Hart told beIN Sports. “The biggest compliment I can pay him is he’s made an old donkey like me feel young again.”

Callum McGregor, appointed captain by Postecoglou last summer, adds: “The job he’s done has been outstanding. Where the club was and where he’s taken it to, it was an enormous task. There’s still more to come from him and this team.”